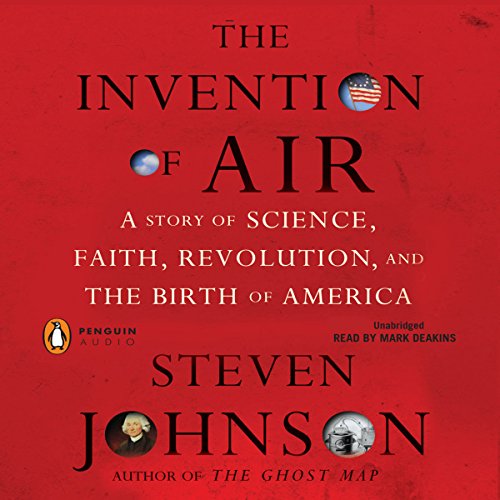 Best-selling author Steven Johnson recounts - in dazzling, multidisciplinary fashion - the story of the brilliant man who embodied the relationship between science, religion, and politics for America's Founding Fathers. The Invention of Air is a title of world-changing ideas wrapped around a compelling narrative, a story of genius and violence and friendship in the midst of sweeping historical change that provokes us to recast our understanding of the Founding Fathers.

It is the story of Joseph Priestley - scientist and theologian, protege of Benjamin Franklin, friend of Thomas Jefferson - an 18th-century radical thinker who played pivotal roles in the invention of ecosystem science, the discovery of oxygen, the founding of the Unitarian Church, and the intellectual development of the United States. And it is a story that only Steven Johnson, acclaimed juggler of disciplines and provocative ideas, can do justice to.

In the 1780s, Priestley had established himself in his native England as a brilliant scientist, a prominent minister, and an outspoken advocate of the American Revolution, who had sustained long correspondences with Franklin, Jefferson, and John Adams. Ultimately, his radicalism made his life politically uncomfortable, and he fled to the nascent United States. Here, he was able to build conceptual bridges linking the scientific, political, and religious impulses that governed his life. And through his close relationships with the Founding Fathers - Jefferson credited Priestley as the man who prevented him from abandoning Christianity - he exerted profound if little-known influence on the shape and course of our history.

As in his last best-selling work, The Ghost Map, Steven Johnson here uses a dramatic historical story to explore themes that have long engaged him.

This book looks comprehensively at the life and works of Priestley, examining the multiple influences on his work, and describing his influence on leaders of the American Revolution, including Franklin, Adams and Jefferson.

The book's main strength is its explanation of how multiple influences, including Priestley's aptitudes and education, the conventions of English coffee house society, England's easily accessible coal deposits, and luck, came together to make Priestley's work possible. Johnson argues persuasively that scientific breakthroughs depend not just on scientific tradition, experimentation and individual brilliance, but also on the political and economic environments within which scientists operate.

Johnson at Top of His Game

Johnson is the author of one of my favorite books of 2007 - The Ghost Map - as well as a bunch of other great science books. This is another one of those books that make me question my formal education, as despite being a U.S. history major and life-long Ben Franklin read I had not known (or remembered) anything much about Joseph Priestley. The role that Priestly played in the 18th century scientific enlightenment is a crucial one. He was a (younger) contemporary of Ben Franklin, a popularizer (like Johnson) of the work of Franklin and the other "electricians", and the discoverer of oxygen.

Priestley seems to pop up at all the key scientific and political events of the 18th century, making friends (and creating enemies) with our founding fathers. Johnson makes the point that today we are missing scientists who both take the lead in politics and religion. A religious political progressive in the form of a scientist appears to be a contradiction in our world. The Invention of Air helped me understand both the early origins of the scientific revolution and some about our early history as a country. An accessible and enjoyable read. Johnson at the top of his game.

Compelling but over-reaching story of Priestley

There were some nice moments in this book but, ultimately, I think the author reads more into his case studies than is warranted. Johnson asserts that our political leaders often ignore or even denigrate science (certainly true) and, in the process, betray the fundamental, American values of our founding fathers (may be true of Franklin and Jefferson, but I'm not so sure on Washington, Adams, and the rest of the gang). The book is one part biography and one part contemporary political commentary.

There are some very interesting ideas here and some good thinking/research behind them but, in the end, I would have rather heard more about Priestley's methods and discoveries (many get barely a mention) and less in the way of musings from the author. Priestley's accomplishments and influence are intriguing and amazing enough without the need to tie them to today's political discord.

Overall, enjoyable but a bit like a dinner conversation with a person who's learned a whole lot about a subject and wants to interpret too much through its lens.

If you could sum up The Invention of Air in three words, what would they be?

This was an entertaining blend of history, science and philosophy. The insight into the times and circumstances at the founding of our country was unique.

A fun read about an extraordinary inventor, woven together with the right blend of serendipitous twists and continuity. You can follow it on audio, and the tale moves along compellingly, connecting wacky lab science in England's for the Lunar Society all the way to the American experiment in Democracy of Jefferson and Adams.

Breath it now while you still can

This is very informative. I loved it. made me think about a lot of things we take for granted. A good history about life back then and something we should think about while applying our thoughts to this era.

I have long believed we need more scientist in politics. Turns out we were graced with one early on.

Puts meaning on home events came to pass and how folks met and grew in mind and spirt....engrossing history....folks come alive.

Great story telling! I learned a lot from this book, a refreshing approach to non fiction.