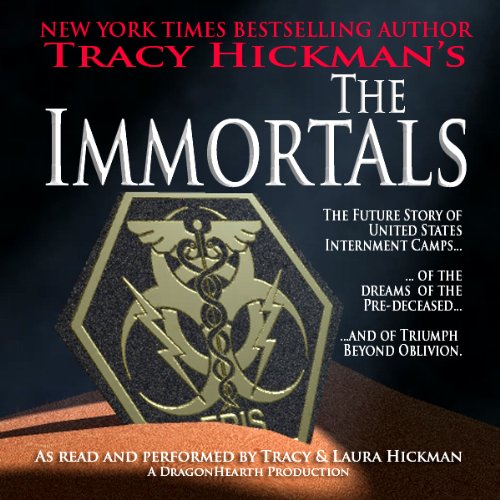 "Excellent and exciting...depicts a future far too many Americans think they'd like to see...an important book." (Robin Wayne Bailey)
"Powerful, disturbing, with its vision of a future that is all too possible, the true message of Hickman's The Immortals is ultimately a message of hope." (Margaret Weis)
"Boasts some considerable virtues, including superior characterization, a carefully built setting and excellent pacing....[Hickman's] to be commended for his daring and vision." ( Publishers Weekly)

The future story of United States Internment Camps...of the dreams of the pre-deceased...and of triumph over oblivion.

It's 2020, and an attempted cure for AIDS has mutated into a deadlier disease, V-CIDS. The United States, under martial law, has set up "quarantine centers" in the Southwest. Searching for his gay son, Jon, media mogul Michael Barris smuggles himself into one of the centers, only to discover that it and the other centers are actually extermination camps. With a strange assortment of allies, including the leader of the camp's gay barracks, an Army officer, and a local cowboy, Barris precipitates an inmates' rebellion that promises the unraveling of the death-camp system and the overthrow of the government that established it.

Much to my chagrin I did not read the reviews before purchasing this book. I have other audio books by the author and am pleased with them so was not prepared for the disturbing sound affects to be found on this recording. Most disturbing in my opinion is the alternating high and low buzz similar to a cell phone ringing, in the background that has nothing to do with the story but is just THERE.

Unfortunately because of vision problems I don't have the option of reading the book from the library so I am just stuck with an extremely disappointing recorded book that is probably a pretty good book.

I really wish I had read the other reviews before buying this audiobook. The story may be great, but I'll never know; I can't stand to listen past the first chapter.
They say it was read and "performed" by Hickman and a relative. I've usually enjoyed listening to authors read their own work. Had Hickman stuck to just reading it, it would have worked ok. Sadly, he also produced it (in his living room?), and had someone with a electric keyboard and a stack of sound effect CDs doing really cheesy background noises.

What finally got me was the loud, continuous sound loop of a protesting crowd- when there was no protesting going on in the story. I couldn't even focus on the author's words it was so distracting.

I might check the book out from the library. I certainly won't be buying it. The authors have gotten too much money from me for this mess.

The premise of this book looked interesting prompting me to purchase it. It's the only audio book I could not finish because of the unskilled handling of the reading. I think it's the authors brother. Good intentions are not enough - skill is required. The story too is over told and didactic in nature. Not recommended.

This is a good book ruined by a well meaning, but amateurish, overdone production. The author and his wife should have gotten professionals to read and done their homework by listening exemplars such as Will Patton reading the James Lee Burke's Dave Robicheaux books. THAT is the creme de la creme. And lose the repetitive, overblown music: your story deserves it.

This audio rendition can't decide if it is an old time radio show or a reading of a book. The audio quality sounds as if it was done in someone's basement. At first the sound effects appear to be mistakes in the recording, but then you realize they are supposed to be there. They are added in odd places and though the author does a decent job reading, they should have left it to professionals. The story is decent, but I may have to read the book to see if I like the story or not.

The narration and audio on this book is almost unbearable. The story is a very good one and extremely original. Unfortunately, its difficult to listen to audiobook. The dramatization was amateurish at best and the background sound effects were entirely too loud.

Hickman is good, character development and flow of the story are fine, but the production is the worst I have heard ever!!!!! The musical interludes are long and distracting.

This is a pretty Good Book :}

This isn't as bad a book as every one is making it out to be I liked it just fine and will probbly listen to it again But not right away..
I gave it 5 stars because I would like to see the overall rating come some the book is worth the price and the time of the listen

After dozens of audiobooks, this is clearly the absolute worst for audio. A professional reader would have helped, but the annoying sound effects and musical interludes are nearly unbearable. One whole chapter has a phone ringing constantly.

As far as the plot goes, some listeners may find it interesting, but the whole concept is quite implausible. After 30 years of AIDS as a slow, contagious disease, it's hard to imagine, why a more virulent form that kills in a matter of weeks to months would create the desire to lock them all up as well as feel the need to intentionally kill them before they succumb to a natural death. In fact, if AIDS were in fact more virulent, the epidemic would likely run itself out in a matter of several decades anyway.

The author writes with an axe to grind against everything that is non-gay. Gays are unjustly villified in the novel and society has been transported 100 years back in time, rather than forward. The character of the internment camp is also completely unrealistic since the "prisoners" behave as if they have lived there for years rather than a few weeks. The "make work" activities and structured play would be more at home in a North Korean re-education camp, rather than what should be middle class educated Americans.

The implausibility of this scenario simply serves to make the characters actions either meaningless or unrealistic.

Hard to listen to.

There were so many parts that I had trouble listening to because of the "background noise" . often times it was distracting as I tried to figure out what the random noises were and then would miss an important story part. There were even a few chapters that I had to skip completely as the "echo/static" that was added to soundtrack made it actually painful to listen to through my headphones. Would love to listen to a version without all the NOISE

couldnt get past chapter 5

i expected a great book by a favored author. the book was okish,but stick to writing tracy

I can't comment on the actual story as I had to stop reading about 10 minutes in. The constant ringings and buzzings in the background gave me a migraine. -.-