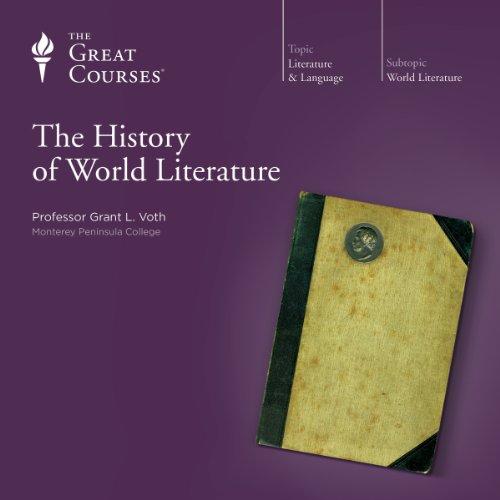 The History of World Literature

Whether around the campfire, between the covers of a great book, or in the theater, the desire to tell stories has been a common human impulse for thousands of years. These 48 lectures take you on a journey through time and around the world- from the enormous auditoriums of ancient Greece to a quiet study in the home of a 19th-century New England spinster- to introduce the history of world literature.

In this course, you'll sample some of the greatest literary expressions the world has known and experience storytelling in its many forms, including poetry, drama, and narrative. You'll explore: the ancient world, where tribal bards created national myths and founded religious texts out of legends, history, philosophy, and local lore; the countryside and aristocratic courts of India and the Middle East, collecting stories and folklore of magical men, terrifying beasts, alluring women, and conniving tricksters that live on in today's fairy tales and bedtime stories; the Middle Ages, the Renaissance, and the Enlightenment to trace the evolution of storytelling from the poetic masterpiece of Dante's Inferno to the great drama pioneered by Shakespeare to sophisticated narratives such as Wu Ch'eng-en's Monkey and Voltaire's Candide; and the rise of Realism in the works of Flaubert, Dostoevsky, and Chekhov and the development of experimental modes by Brecht, Beckett, and Borges.

Offering concise summaries and thought-provoking interpretations of some of the world's greatest literary masterpieces, this course gives you the tools you need to appreciate these great literary works and understand how authors, playwrights, and poets throughout the centuries have practiced their craft.

Would you listen to The History of World Literature again? Why?

Yes, it's the kind of presentation that covers so much in a given time that going back and hearing it again always increases what the "reader" takes in.

What was one of the most memorable moments of The History of World Literature?

There were several. One was how accessible he made Japanese poetry. Another was his marvelous demonstration of "how to cover Shakespeare in 30 minutes." (Hint: he recognizes up front that it CAN'T be done; but he makes an enjoyable and creative presentation anyhow.) I was also very impressed with how approachable for non-scholars he made some very complex pieces like Gilgamesh and some of the Asian literature.

Have you listened to any of Professor Grant L. Voth’s other performances before? How does this one compare?

Yes, and he is always superb, but this is his best.

Not possible because it is very long, and more so because each lecture invites you to run it back in your mind before continuing on to the next.

I recommend this course to everybody I talk to about audiobooks.

What did you love best about The History of World Literature?

The professor's enthusiasm for the subject matter as well his ability to communicate clearly.

Not sure this question applies. Obviously the professor / narrator =D

Some people will criticize the brevity of the lessons, but I do not believe the intent of this course was to delve *deep* into any given literary art. My *one* true criticism, however, is that the professor does not often re-iterate which author and work he is talking about, and since Audible's mobile app doesn't have the name of the author or work in the title of each chapter (it just says something like "History of World Literature: Chapter XX), it makes it hard to keep track of which region, author, and work he is talking about. It would be nice if there were reference material in the annotations.

Otherwise I very highly recommend this to anyone unfamiliar with world literature (like myself).

Loss for words but only momentarily

This is the most comprehensive collection of world literature I've experienced. Considering I have a BA in English Literature, that's quite a statement. I adored many things about this series, however, I can't list them all, so I will share a few main ones here:

Professor Voth does a phenomenal job of gathering stories from the past and present and from many different parts of the world (as one would assume by the title of the course) but he actually achieves this without being as ethnocentric as most Western collections tend to be.
The framework of storytelling was a brilliant way to achieve a broader collection of tales, considering that much of history and language was and still is based on oral tradition rather than the written.

Journeying across time and space to discover the evolution of Literature and writers and cultures is brilliantly illustrated by looking through the lens of storytelling and is enhanced by Professor Voth's own storytelling. He is engaging, humorous, passionate and fortunately can deliver the material in a way that appeals to an audience of intellectuals and the casual reader.

In addition, the provided information (outlines, selected reading materials, glossaries, etc.) was extremely informative and helpful and I believe this should be included in every course.

I will likely listen to this course many more times, especially after I read works discussed that I was previously unaware of. I feel that I've missed something remarkable by not having read these works already and am excited to fill that void with the rich Literature introduced in this series.

To anyone interested in Literature, this gripping series is a must read and worth every minute of lecture.
I'm looking forward to more from Professor Voth and other Great Courses.

I loved every second of this class. I have read many of the books, have now been introduced to other authors that I didn't' know existed, but can't wait to read. I have never heard such an excellent "reading" of many of these artists. I THANK YOU for these tapes. I will be back to listen to your "Joyce" class.

This is an encyclopaedia of Literature of the World, told with a great knowledge, insight and passion! I loved everything about this edition- the selection of books, the way the lecturer presented his material, and also his soft voice - which is a very important component when we are talking about some 26 hrs of listening! I HIGHLY recommend these lectures to everyone interested in literature and the way it was developing in our world.

Great teacher, learned a lot, very engaging. I recommend to anyone interested in novels, short stories, poetry or drama. Great.

What made the experience of listening to The History of World Literature the most enjoyable?

the instructor shows sincere interest, passion in the subject, and that makes listening fun

What was one of the most memorable moments of The History of World Literature?

It's an amazing epiphany : realizing how similar/varied cultures in different corners of the world think in the same period!

Have you listened to any of Professor Grant L. Voth’s other performances before? How does this one compare?

Would be great if a list of the readings mentioned in the course is provided here.

What made the experience of listening to The History of World Literature the most enjoyable?

I know this is really long, but if you have the time to invest, it's a great overview spanning all history. This professor is excellent!!!

This is an incredible overview of 5000 years of literature. It is a wonderful opportunity to learn a bit of some of greatest stories ever written.

Would you consider the audio edition of The History of World Literature to be better than the print version?

Yes Because the lecturer is excellent in the way the course is structure.

The Course itself is best to do chapter by chapter as it is intensive.

What other book might you compare The History of World Literature to, and why?


Any of the Great courses within the literature subjects.

Which character – as performed by Professor Grant L. Voth – was your favourite?

All of the course. It is a long format, so do take your time. The narrative of the characters of the first half of the course which explained about the nature of the novel is the main bases for me to understand.

Yes all of it.
The subjects are divided section by section so its easy to learn, it is intensive so please please take your time.

It has long since become a cliche to say 'everybody should read this book' (or, in this case, listen to a course) but believe me, this one surely that being said about it.
Whether you are in high school or a keen amateur reader or, in fact, just curious what is the deal with this literature thing, by the end of the course you will be not only more knowledgeable but also be likely to fall in love with literature (again).
Professor Voth's voice sounds like it belongs to a waterfront thug, which just adds another (and great) dimension to the whole affair as he dispenses brilliant analysis of some of the most familiar and some not so familiar works of world literature.
Another aspect of the course which I really appreciated was geographical breadth of the books covered. Yes, there is a lot of European literature but you will also hear about American, Asian and middle-Eastern works - I don't consider myself to be ignorant but some of the books covered were new to me.
Highly recommended.

Would you consider the audio edition of The History of World Literature to be better than the print version?

Yes, this course of lectures are well read, without unnecessary theatrics, at an easy listening pace, all of which make an exceptional difference to the usability of an audiobook.

What other book might you compare The History of World Literature to, and why?

In my mind this compares to a lit review magazine more than just another book as it takes the best and most notable works from history and consecutively describes the gist of each story as it were and briefly analyses its' effects in its own time as well as its impact on any following literature as well as the reach of its effect.

What does Professor Grant L. Voth bring to the story that you wouldn’t experience if you had only read the book?

Professor Grant L. Voth brings in a wealth of experience in analyses as well as the remarkable understanding of a well read mind and allows the listener the benefit of both.

The collection and progression of man's wisdom through literature throughout recorded history.

His voice is pleasant, non-monotone, non-drowsy and not theatrically animated with different pitches for different characters. Its really good.

thoroughly enjoyable introduction to world literature by a great expert in the field. highly recommended