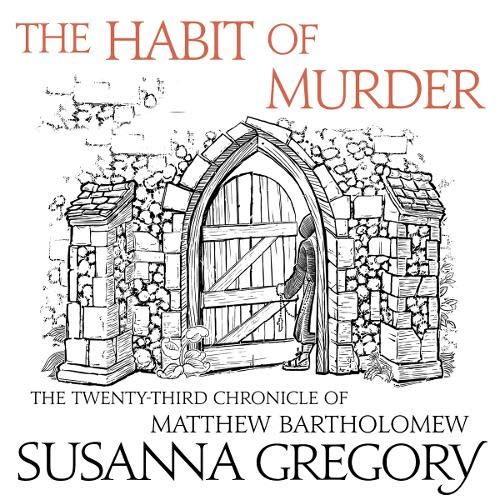 In 1360 a deputation from Cambridge ventures to the Suffolk town of Clare in the hope that the wealthy Elizabeth de Burgh has left a legacy to Michaelhouse. Yet when they arrive, they discover that the report of her death is false and that the college seems destined for bankruptcy.

Determined to see if some of its well-heeled citizens can be persuaded to sponsor Michaelhouse, Matthew Bartholomew, Brother Michael and Master Langelee become enmeshed in the town's politics. They quickly discover that a great many other people in Clare have recently met untimely deaths. These killings, combined with the arrogance Lady de Burgh has shown over the refurbishment of the church and the grotesque behaviour of some of her entourage, have created a dangerous restlessness in the town - an atmosphere intensified when yet more murders occur.

One of the victims is a fellow traveller of the Michaelhouse contingent, and Matthew Bartholomew and Brother Michael feel honour-bound to identify his killer. It is a hunt which takes them deep into Clare's murky foundations and which threatens their own survival as well as that of their beloved college.

The Bartholomew series is always a good listen. Gregory's​ books and Thorpe's​ narration are ment for each other.

What a great series!

The Habit of Murder is the 23rd Matthew Bartholomew book. The series is well plotted, well written, and lots of fun. I particularly like the end notes about the real people & incidents who inhabit both the books and Cambridge of the mid-13th century.

I tried but there was no way I was going to finish this one. I sent it back for refund. So slooow it was maddening. No my cup of tea.

I have read 22 of Suzanna Gregory's medieval books and have thoroughly enjoyed the storylines and getting to know the characters so when the chance came up to get an audible version of the latest story I jumped at the chance. Now I have voices to go with the characters and I am not disappointed. Matthew has come to life as the doctor, a little unsure of himself but determined to be heard and do his best. As for Brother Michael, he is very much like how I pictured him, a little effeminate but utterly confident in what he is about. I just love everything about these stories, so we'll written and research. Congratulations to Suzanna for an excellent another read/listen

Better that some of the more recent chronicles

I enjoyed this book more than some of the more recent chronicles. The writing wasn't quite so formulaic probably because this book isn't set in Cambridge - for once Matthew didn't have to use his birthing forceps in defence! There are a lot of characters, a lot of sub plots and it feels like the book has two endings but it's more of the usual enjoyable stuff. Sadly, it does feel like the series is coming to an end.

More of the same

I've now listened to all 23 of the books in this series.....I'm not sure why? No that's not true, I like the period setting, I like the characters that run through the series (well most of them, the so-called main hero is a woss)

Some of the research is very good but a lot is in fact very bad. Most of the people involved living their lives in a way that would have been impossible for many reasons. The doctor's success rate for example would have made him a saint (or more likely a witch). the everyday population are far too well educated and widely travelled but then again,who wants to read about people who spent their every working hour struggling to stay alive. But the backgrounds are interesting and comfortable to listen to in "background while working" sort of way (which is how I listened to them)
On the downside the storylines are never very good and,(at least towards the end of the series) repeat over and over, I can't remember how many times we ended up in the attic of a church trying to stop some lunatic from setting it on fire or bringing it down on the congregation below.
Bottom line is I'm sad there are no more, so something must have been right. I'll miss the devious Michael, the obnoxious William , the dominant Langaley and the monk who pretends to talk and listen to animals but is, in fact, the best eyes and ears in Cambridge. As for the main man, Bartholomew his "Dr Watson" type character tries to become stronger as the series progresses but he never really makes it and is, for the most part, an annoying wimp

Tedious and over emphasised

This was disappointing, both story and performance.

The story became just one tedious death after another, while tHe narration is over emphasised throughout and the ‘voices’ didn’t match the characters in my head.

another wonderful murder mystery with all my favourite people...well researched and a real page turner