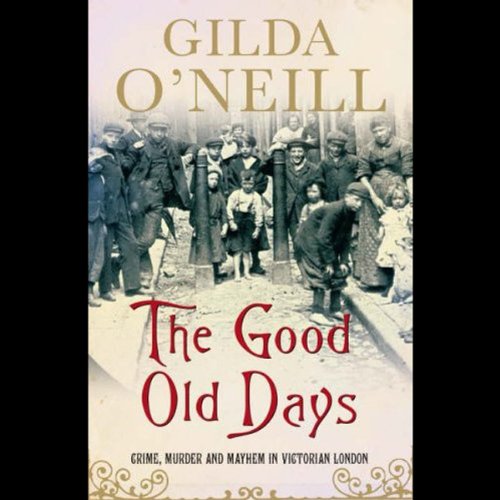 "O'Neill is great company, with a fund of anecdotes and a keen eye for a killing epigram." ( New Statesman)

Were things really better in the good old days? The 19th century was a time when there were not only massive gulfs being created between the upper, middle, and working classes, but there was also a growing awareness of the existence of an even more impoverished underclass: a terrifying demi-monde of criminals, tarts, and no-hope low lifes.

Gilda O'Neill's powerful exploration of the teeming underbelly that was to be found in the fog-bound streets, rat-infested slums, common lodging houses, boozers, penny gaffs, and brothels in the heart of the greatest empire that the world has ever seen brings to life the real working-class London of Victoria's reign.

Michael Tudor-Barnes is a fantastic narrator. I found myself laughing out loud at the way he was reading this book. It's an excellent insight into the dark side of victorian britain and the narrator made it very easy to listen to.

This is why people should be interested in history

You will often hear right-wing politicians say things are getting worse and the 'good old days' were something we should return to. This book was written as a repost to that - to point out that the good old days were every bit as 'bad' as our own time, and in so many ways a great deal worse. It is a catalogue of the various crimes committed in Victorian Britain, ranging from pick-pockets to attempted regicide, and occasionally seems to read like a rather sensationalist telling of a juicy story as you might find in a newspaper of this or any other age. On the whole however it contains a lot of insight into the way society worked and behaved during the 19th century, so while the point - that things were a lot worse for many Victorians - is made beyond the point of overkill, as a more general commentary on Victorian society this is an interesting book.

It is well read, although at the end things get a bit strange when the reader starts talking about his time as a young girl in London (when you first realise the author is actually a woman). Surely someone should be choosing female readers for female authors? The tiniest of observations though, because as a whole I thought this book was very laudable and well worth a listen.

As I said in the title, anyone who thinks Victorian Britain was a golden age of decency, good behaviour and high moral values clearly does not know their history, and would do well to listen to this book (amongst others). If ever there was a reason to study history in order to really understand ourselves today then this book is a pretty good example.

I enjoyed the content and stories, but narrators voice literally kept sending me to sleep.

Would you try another book written by Gilda O'Neill or narrated by Michael Tudor Barnes?

I don't think I'll try anything by O'Neill simply because it's too general and not informative enough. Although you can get a new, personal angle because of the family history is firmly bound to the history of East End, most facts and information can be found in other, often more interesting books. As to Tudor Barnes he's simply fantastic and his name is usually a positive in any book.

I enjoyed the book, but the the author rather labours the point that the Victorian age was not the time of high morality and social harmony we all, she thinks, think it was. I think Dickens, as well as our communal knowledge of Whitechapel at the time of Jack the Ripper had already made that more than clear.
The book would have been better had the author not wished to make that point. She's very unoriginal in that.
When are Audible going to put Henry Mayhew on audiobook?

This wonderfully written book is based on the premise, first heard in the 1980s, that we needed a return to Victorian values - the good ol' days. This would then facilitate a more caring society with a strong religious and work ethic at its forefront. Gilda O'Neil refutes the Conservative wish to return to Victorian values and describes how life really was in Victorian London, particularly with reference to her ancestors lives in the late 1800s. She revisits the slum dwellings, the crime and diseases of the nineteenth century and asks 'do we really want a return to this?'

My one criticism would be the narrator, and this is a very minor point, when Gilda is referring to her life in the East End and is writing in the first person, it is a little disconcerting to have a male voice narrate the story. However, it does not detract from this excellent work.