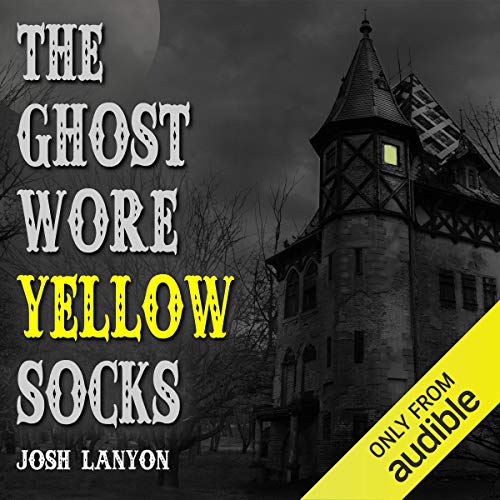 His romantic weekend in ruins, shy 20-something artist Perry Foster learns that things can always get worse when he returns home from San Francisco to find a dead body in his bathtub. A dead body in a very ugly sportscoat - and matching socks. The dead man is a stranger to Perry, but that's not much of a comfort; how did a strange dead man get in a locked flat at the isolated Alton Estate in the wilds of the 'Northeast Kingdom' of Vermont? Perry turns to help from 'tall, dark and hostile' former navy SEAL Nick Reno - but is Reno all that he seems?

And the Spirits say...

From the word 'GO' the journey of who 'dunnit' intrigues the reader, at least until near the end of the story. Though I suspected who the culprit was, I was often left questioning my conclusion several times throughout the tale. Lanyon is a great writer and he enthralls the reader to the very end of the story. Though I will confess that I felt that it dragged in some areas, understanding the specifics of the budding relationship between Perry and Nick added to the mystery. I almost was more caught up in that dynamic than the man with the hole in his shoe and the mystery. Almost...

I recently discovered Josh Lanyon, in the Adrien English series, and was eager to read this story which I think is one of his early novels? The story was excellent, keeping in mind it was a much earlier example of his art.

Sometimes I enjoy a writer's work so much I forget to check out the audio sample to see if I like the narrator, before I buy the audio version. Because I require a narrator, not a reader, to fully enjoy an audiobook.

This narrator, Max Miller, at first almost disappointed me, the voice seemed so lacking in energy and the narration was flat. But liking the Josh Lanyon stories so much, I persevered, and thankfully found the narration quickly improved. The individual voices become well delineated after the first couple of chapters, and the background narration itself picks up energy and rhythm as the story progresses.

I am in the midst of reading and listening to all the Josh Lanyon novels I can find, and I definitely would buy another one narrated by Max Miller.

Perhaps not a true ghost story, but it is a great story. And it is both entertaining and thought provoking since it is a "who done it" type of story. It is also a decent piece of gay fiction that pairs unlikely lovers in a unique setting. I liked it a lot.

I would totally recommend this book to friends as it is a good, old-fashioned (with a twist or two) murder mystery set in a crumbling mansion. The action (of all sorts!) proceeds at a nice pace, tension building to a great finish. The supporting characters add local color and this listener could really imagine himself at the scene of the action.

Which character – as performed by Max Miller – was your favorite?

I really liked Nick- everything you expect in a Navy Seal and more. Miller's acting (it's really more than just reading) is fantastic, accents and all. He captured the characters so well.

I would have loved to listen to this book in one sitting. However, I mostly listened during my public transit/walking commute to work. The story/performance made my daily commute fly by for a few days!

I will definitely look up more books by Josh Layton!

Would you consider the audio edition of The Ghost Wore Yellow Socks to be better than the print version?

Perry's spirit and very dry sense of humor, and stone-cold Nicks unthawing the longer he was around Perry.

Fairly good narrator for this story. Would have liked a bit more lower range in his voice, especially for Nick.

I hope there is NEVER a movie made from this wonderful story. Hollywood NEVER gets it right unless the author is in complete control. And unless Josh becomes JK Rowling overnight... that's not going to happen. Leave it be.

What made the experience of listening to The Ghost Wore Yellow Socks the most enjoyable?

I've read the book, and just could not get into it. With the audio, Perry & Nick just came to life!

What was one of the most memorable moments of The Ghost Wore Yellow Socks?

Perry discovering the body in the bath tub to start with, but I don't want to give away any thing for the next reader or listener.

Did kind of tense up on the more suspenseful parts and had a couple of aaaaah moments.

I would highly recommend, especially if you had a little trouble with the book. If you loved the book, then this will be a really special treat!

Where does The Ghost Wore Yellow Socks rank among all the audiobooks you’ve listened to so far?

One of the best I've listened to -- by far. The voice narration -- nay, voice acting -- was exceptional, vividly portraying each character, making them easily recognizable without any attribution. It was a little scary how good they were. Accents were good, even making different Vermonters recognizable.

The book itself is a great old atmospheric gothic tale, though more like the Hardy Boys than an overblown Gothic romance might imply. The atmosphere, descriptions and wry humor were all spot on. Just great stuff.

Perry, who was both a slightly fragile man and a really sarcastic bastard. A bit like Lanyon's Adrien English, but more artistic and painterly.

Which character – as performed by Max Miller – was your favorite?

Oh man, they were all good. Mrs Mac was both funny and scary. Nick was a great gruff, traditionally masculine voice (sexy!) and all the Vermont accents were spot-on. If pressed, I'd have to pick Nick.

As if Perry didn't have enough problems, now he's got a dead body in his bathtub. At least, it was there, and now it's not. The cops aren't particularly getting called out in this weather. What is going on in that great old weird mansion? Is every one of his fellow renters crazy, or is it just the hunt for lost treasure making them act that way? Who keeps murdering people?

Not much of a mystery and I don't care for the detailed sex scenes, but it was a sweet
Little love story.

Still on a Josh Lanyon High!

I am in love with this story

The characters are incredibly complex and not at all what you believe them to be when you start to listen/read this book. Like 'real' people these characters are very complex, and like good friends, you get to know them over time. In this case the time span occurs over the span of story. The characters are revealed as the story continued. They are revealed not by just the words of the story but also by their actions within the story. The mystery is a very nice and well done way to see these people interact. The performance is great, each character distinct and very well acted. Every new book I pick up by Josh Lanyon leaves me spell bound. Every character distinct, every story enjoyable. This particular story will probably become one of my favorites.

The story is reminisant of good old fashioned cosies, Lots of scooby doo running around with hidden passages, strange characters and missing gems. Personally I still like them and so enjoyed this.

Characters are pretty standard Lanyon fare - big tough guy and slighter, weaker (in this instance asthmatic) guy who is the brains of the outfit. Not the most believable pairing, but I liked the grudging romance that develops between them, the pacing of it was nice.

The narration is good but I found the character voices distracting. Max Miller creates very different voices for each character and while credit is due his ability there, but for me they didn't sound right, Nick sounds bored and Perry very young; nationality probably has an impact there too - I'm british so less familiar with american accents.

Thank god you can speed up playback

He's soooooooo slow. Completely unbearable to listen to. I had to speed it up, which I've never done before. Just a dreadful performance.

This is my favourite Josh Lanyon story and I've read it several times. I love the seamless combination of wit, mystery and gentle romance. The narrator Max Miller was wonderful, making an old comfort read seem fresh again with his character voices and impeccable delivery.