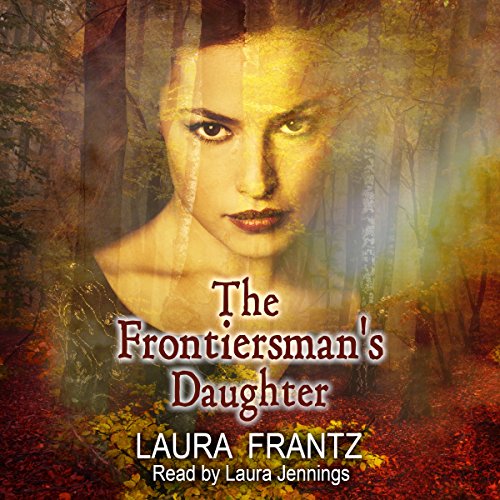 Lovely but tough as nails, Lael Click is the daughter of a celebrated frontiersman. Haunted by her father's former captivity with the Shawnee Indians, as well as the secret sins of her family's past, Lael comes of age in the fragile Kentucky settlement her father founded. Though she faces the loss of a childhood love, a dangerous family feud, and the affection of a Shawnee warrior, Lael draws strength from the rugged land she calls home, and from Ma Horn, a distant relative who shows her the healing ways of herbs and roots found in the hills. But the arrival of an outlander doctor threatens her view of the world, God, and herself and the power of grace and redemption. This epic novel gives listeners a glimpse into the simple yet daring lives of the pioneers who first crossed the Appalachians, all through the courageous eyes of a determined young woman. Laura Frantz's debut novel offers a feast for fans of historical fiction and romance lovers alike.

I enjoyed this book because of the story, but also because the narrator brought it to life! I was able to truly feel like I was in the moment the entire book. I imagined all of the scenarios and could see the characters clear as day! Well worth a credit! Can't wait to hear more from this author and narrator!

This audiobook was provided by the author, narrator, or publisher at no cost in exchange for an unbiased review courtesy of Audiobook Blast.

Takes me away a piece, to Kentucky.

The narrator's voice was perfect, pace was good. Descriptions were able to pull me away to the time, place and all the surroundings. A romance, but not predictable, no detailed sex scenes to have to fast farward through. A Christian theme, but not over stated. I enjoyed this one very much. never once ffwd.

Would you listen to The Frontiersman's Daughter again? Why?

Yes, the characters are wonderfully rich.

Which character – as performed by Laura Jennings – was your favorite?

Ms. Jennings helped bring to life all of the various characters of the Kentucky frontier.
Her soft storytelling was perfect for this tale. Softly weaving a beautiful tapestry as depicted by the author.

I received a copy of this audiobook from audiobookblast in exchange for an unbiased review.

I liked this book for all the medicine remedies that people used. The story is great going from frontier daughter to charm school and back to the frontier. Really tells of the harsh living of those days and the hard work it took to live.

"This audiobook was provided by the author, narrator, or publisher at no cost in exchange for an unbiased review courtesy of AudiobookBlast dot com."

not exactly what I was expecting but was still good

Well written story that keeps you listening. The narrator carried the story and characters through nicely and was a pleasure to listen to. I don’t usually listen to books in this category, but will be looking for more from this author in the future.

* I was given a free copy of the book from AudiobookBlast dot com in exchange for a fair and honest review.

The Frontiersman's Daughter: A Novel

This is a wonderful Historical Fiction . Whom will the Frontiersman's Daughter choose, Simon, Captain Jack, Dr. Ian, someone else or no one at all? The plot has the young lady living in early Kentucky with Indians, settlers, soldiers and more. She is sent to Virginia to become a lady. Years later after her father's death she returns home where the adventure begins.

The narration was excellant.

More twist and turns than the Snake River

As soon as I thought I had figured it all out, another heart wrenching plot twist leaped into the fray. The narrator was good and had several unique voices though several times common words that are pronounced differently depending on the context were mispronounced. Once the word “awed” was read as “a wed”. it was a bit distracting but the narrative was clean and the characters complex. I enjoyed it.

I loved this book.Some of the words I haven't heard in a long time.I cried at the end.

My first book by Laura Frantz and i’m hooked. Loved the character building and love ALL the characters. I especially loved how patient God was with her and her relationship with Ian. I was kinda hoping she’d end up with Captain Jack...but then they’d be unequally joked. But I loved the story!