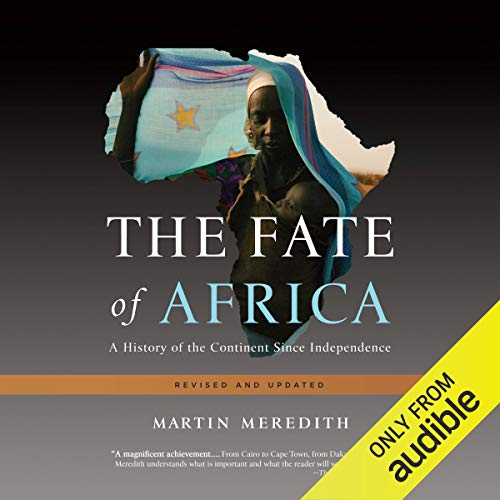 The Fate of Africa

Martin Meredith has revised this classic history to incorporate important recent developments, including the Darfur crisis in Sudan, Robert Mugabe’s continued destructive rule in Zimbabwe, controversies over Western aid and exploitation of Africa’s resources, the growing importance and influence of China, and the democratic movement roiling the North African countries of Tunisia, Egypt, and Jordan.

Africa: Land of Hope and Horror

If you could sum up The Fate of Africa in three words, what would they be?

What was one of the most memorable moments of The Fate of Africa?

The Chapters on the events in Rwanda and how they were misconstrued internationally was informative and incredibly disturbing. The level of cooperation with the genocidaires displayed by Rwandan church leaders was disgusting... an affront to religion itself. On top of all that we sent the belligerents billions of dollars in aid money.

Learning about the religious and demographic makeup of Nikgeria and the former Sudan makes it much easier to understand the violent conficlt that has been ravaging those countries for years. In many African states, an ethnically and culturally diverse group of people were forced to coexist within borders drawn by European imperialists. These countries were simply time bombs waiting to go off.

This is a great work of epic proportions. Meredith divides his history of the continent into periods beginning with the initial euphoria and hope of independence to the power plays of the Cold War era all the way up to the modern day. He focusses mostly on the personality of the leaders_Nkrumah, Haile Selasie, Nasser, Mobutu, Mugabe and Mandela to name just a few are covered extensively in the work. Meredith succeds in making The Fate of Africa into a story about human nature. The lesson that absolute power corrupts absolutely is one that many African states have learned the hard way. Because of this era/personality based approached (rather than a traditional geographical approach to history), I do think it can get confusing with all the jumping around from country to country, but one will eventually start to connect the dots and begin to see how events in one state led to changes in another. This is probably one of those books that would be easier to follow in print. One thing that helped me follow the events of the book was looking up most of these leaders online and connecting faces and maps with the story. The narrator must be commended for his comptency, Meredith's work is packed with words and phrases in various Romance languages as well as a plethora of difficult to pronounce African propper nouns. I would not have been able to even pronounce most of those words. However, I think most listeners will agree with me that many quotes in the books are read with a bit too much sarcasm. The narrator also ocassionaly slips into a lackluster imitation of an African accent when quoting African leaders. Unfortunately the prevalence of quotes in this book made this presentation annoying to listen to initially. However the story itself quickly sucked me in.

I had a lot of trouble finding a good audio book on Africa, but this is incredible. It spans the entire continent and gives a broad history since European colonization. The only thing missing is a conclusion that ties all the threads together and reminds you of who is where at present.

So sorry I got from Audible instead of in print

Would you try another book from Martin Meredith and/or Fleet Cooper?

What was one of the most memorable moments of The Fate of Africa?

The section on Nkwame Nkrumah after he became prez of Ghana is stunning and so sad.

In every way possible. His pronunciation of French (and probably the other languages as well) is abysmal. He tries to use an accent when quoting Africans, which only serves to detract from the content. He almost spits out his words, reminding me of a radio show host with an agenda. After the fabulous narration in "Nightingale," this is a huge disappointment. I wish I could delete it in exchange for a Kindle version.

Anger, sadness, AND disappointment. By the time I finish, maybe more.

I've just finished 25%, but I am so unhappy with the narrator, I want to report it now.

Though the book was packed with information and research, it was certainly written from a European prospective.

Deserves to be heard

Having always had a general idea about the history of this continent, I decided to check the validity of my beliefs with this book. The book is both detailed and well written, though at times the unfamiliar names and similarity of sad fates makes it monotonous. That being said, it is a book that is easy to listen to - provided one takes breaks - and hard to listen to, because it is at times horrific.

It is a story that is painful, well written and performed, and that deserves to be heard.

Too pessimistic view of Africa

Would you listen to The Fate of Africa again? Why?

Would you ever listen to anything by Martin Meredith again?

Have you listened to any of Fleet Cooper’s other performances before? How does this one compare?

Warning, this book requires to take medication to survive the 30 hours audio horror happened in Africa. You will come out with the view of never ever going there or living there. I just don't know how he came to view every thing in a negative light. I tried hard to bite my tongue but I had to speak out. I respect his point of view but totally disagree with it.

Really enjoyed it. Provided a good idea of how African history evolved. Different liberation movements. The big men. Through to today.

The book for which I've been waiting

Here we have decades of important information wonderfully reduced to a brief volume. The narration is good when it's not venturing into character quotes. Then, instead of ever sounding like either North Africans or Subsaharans, it always sounds like Johnny Carson, which does not work well.

Skips around too much

This is in many ways a very good book. It is well written and quite interesting. My main complaint is that it tells part of the history of individual countries but seems to leave the story before it is complete. I have read it twice, and it is just hard to follow.