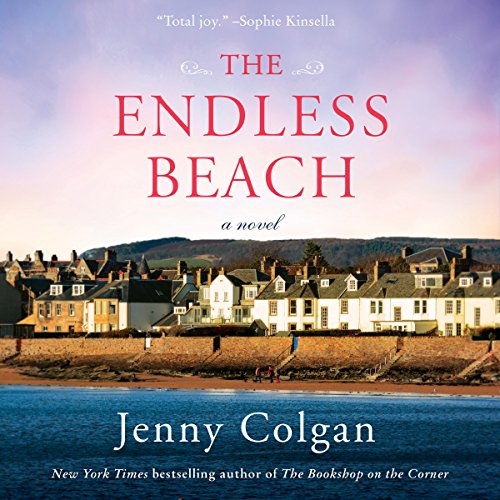 From the New York Times best-selling author of The Bookshop on the Corner and The Cafe by the Sea comes another enchanting, unforgettable novel of a woman who makes a fresh start on the beautiful Scottish Island of Mure - only to discover life has more surprises in store for her.

When Flora MacKenzie traded her glum career in London for the remote Scottish island of Mure, she never dreamed that Joel - her difficult, adorable boss - would follow. Yet now, not only has Flora been reunited with her family and opened a charming café by the sea, but she and Joel are taking their first faltering steps into romance.

With Joel away on business in New York, Flora is preparing for the next stage in her life. And that would be...? Love? She’s feeling it. Security? In Joel’s arms, sure. Marriage? Not open to discussion.

In the meanwhile, Flora is finding pleasure in a magnificent sight: whales breaking waves off the beaches of Mure. But it also signals something less joyful. According to local superstition, it’s an omen - and a warning that Flora’s future could be as fleeting as the sea-spray…

A bracing season on the shore sets the stage for Jenny Colgan’s delightful novel that’s as funny, heartwarming, and unpredictable as love itself.

The excessive profanity in this book made what could have been a good book not so great. Although the story line was good, the narration was terrible. If you don't mind the language, this would be a great book to read but definitely not to listen to.

I want to live on Mure with these people!

I love stories about Scotland. Being an Italian American, this May sound strange but I have always felt peaceful and at home when I watch any shows or read any books with characters from there. I really liked this book series as much as I liked the bookstore series, well almost. I do have one serious criticism though, the narrator, who’s voice I loved when she did the Scottish characters, does the worst American accent ever!! It was very hard to imagine Colton or Joe (I could never truly figure out if his name was Joe or Joel, because of the accent but it didn’t really matter) being handsome because their voices were so grating.

The Summer Seaside Kitchen series is quickly becoming a favorite of mine. The small island of Mure is anything but dull, and the people of the island, both generational residents and new, make the community a very interesting one.

The book continues its primary focus on Flora as she navigates her new-found love for her old home, but with new troubles brewing. Her former boss and current boyfriend, Joel, is away on business, and this starts a downward spiral for them. He refuses to open up to her, and she constantly wonders if she's really enough for the hot-shot city lawyer.

But I was also introduced to two new storylines. Coltan, Flora's brother's boyfriend, has a secret - and it's an awful one. He drags Joel into it, and it's such a big secret that Joel can't really handle it all. This mystery hovers over the story like a fog bank. It's there, but most people don't realize how thick it is. It plays out throughout the story, and when it's all revealed, there's a lot to take in. Jenny Colgan handles it all beautifully, showing that her characters have a depth and feeling that really brings them to life.

I was also introduced to Saif, the refugee that has found somewhat of a home as the island's doctor. His story is another sad one, having been separated from his wife and two children in the war. He walks the beach just waiting for that miraculous moment when a boat shows up to reunite them. But after waiting for so long, he's having a hard time hanging on to the hope.

Not all of these intricate storylines are entirely wrapped up at the end of the book. But they do seem to reach a natural position of concluded for now, but with more to tell. As I get to know more of the island's residents, I fall in love all over again.

I would suggest enough in this series

This author has distinguished herself in recent years by crafting stories set in unique locales. Honestly, though, two books in each location/series is enough.

Great story. Good characters. Made me hungry! I long to be on the cool Scottish coast. However, I could do without the sex scenes. Not why I read.

A Different Jenny -- Not A Happy Story

This is not the typical Jenny Colgan book: not charming or funny like the Book Shop, Chocolate Shop or Sweet Shop. This is sad and even depressing, I found myself wanting to quit about 60% through.

The reader was very nice.

I made it to the end but it's not a keeper and I'll be asking for my credit back.

I can only think that authors go PC when they can’t originate a premise to carry a book. I like her writing and the narration us spot on again, but this sequel to Cafe by the Sea is a bit disappointing. Cafe by the Sea is outstanding!

I loved it! Such a great story and written so well. I am a fan of Jenny Colgan's work!

I listened to the first book and there was a definite distinction between the boil of Colton and Joel. They were the same at points in this book. And, not consistent. But, I love the Scottish accents in narration and Sarah Barron does an otherwise beautiful job with a good story.

This is the story about the inhabitants of a small Scottish town and how, even with the ones we love, it's sometimes hard to share our feelings. It is a happy story and a sad story and many times it is both. It is a story of faith and hope, love and sadness, and just a tiny bit of magic.

I recommend this book to anyone who loves a story of perseverance, but knows we don't always get the outcome we want.