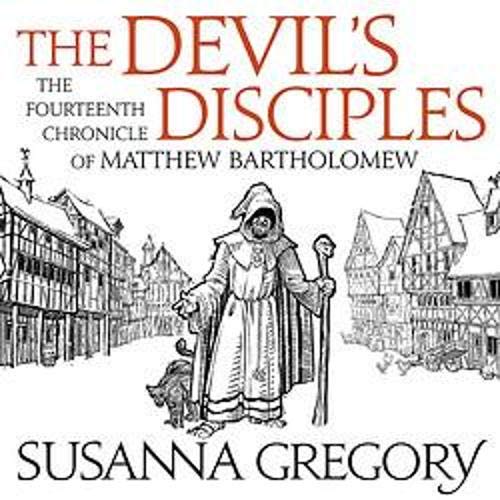 Rumours of plague threaten Cambridge again, 10 years after the Black Death had almost laid waste to the town. Neither the church nor its priests had defended people from the disease, and now they turn elsewhere for protection, to pagan ritual and magical potions.

It is a ripe atmosphere to be exploited by the mysterious 'Sorcerer', an anonymous magician whose increasing influence seems certain to oust both civil and church leaders from power.

One murder, another unexplained death, a font filled with blood, a desecreated grave - all bear the hallmarks of the Sorcerer's hand, only the identity of the magician remains a mystery. A mystery which Matthew Barthlomew must solve before he loses his reputation...and his life.

I'm always happy to find a good series of stories and Susanna's series on Matthew are always entertaining and have that necessary flash of Humour.I'm on the 14th novel (as you see) and am still enjoying the characters and tales. There is however, one exception; Friar William should have a nasty accident as soon as possible. His bigotry and postulating is beginning to rankle, he does little for the Franciscan Order.I look forward to hearing that he is excommunicated and drowns in the Mill Pond.Delighted to hear David Thorpe back in his narration seat; I missed him during his &quot;sabbatical&quot;.

Love the narration just brings everything to life. The research for the story is amazing so the book is both enjoyable and informative

The best denouement so far.

This has to be the best ending of all the Matthew Bartholomew series so far. Really fast paced and very funny even if you had guessed who was who excellently read and thoroughly entertaining.