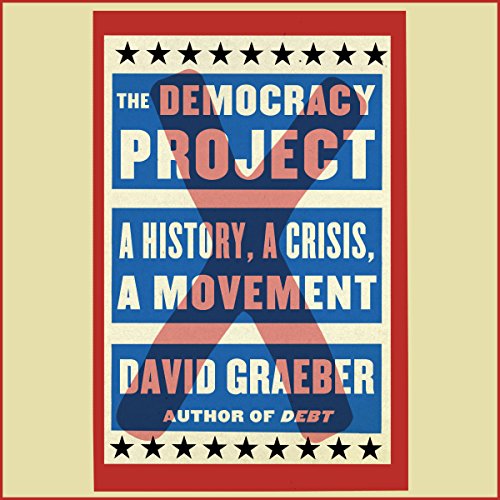 A bold rethinking of the most powerful political idea in the world - democracy - as seen through the lens of the most transformative political movements of our time and the story of how radical democracy can yet transform America.

Democracy has been the American religion since before the Revolution - from New England town halls to the multicultural democracy of Atlantic pirate ships. But can our current political system, one that seems responsive only to the wealthiest among us and leaves most Americans feeling disengaged, voiceless, and disenfranchised, really be called democratic? And if the tools of our democracy are not working to solve the rising crises we face, how can we - average citizens - make change happen?

David Graeber, one of the most influential scholars and activists of his generation, takes listeners on a journey through the idea of democracy, provocatively reorienting our understanding of pivotal historical moments, and extracts their lessons for today - from the birth of Athenian democracy and the founding of the United States of America to the global revolutions of the 20th century and the rise of a new generation of activists. Underlying it all is a bracing argument that in the face of increasingly concentrated wealth and power in this country, a reenergized, reconceived democracy - one based on consensus, equality, and broad participation - can yet provide us with the just, free, and fair society we want.

The Democracy Project tells the story of the resilience of the democratic spirit and the adaptability of the democratic idea. It offers a fresh take on vital history and an impassioned argument that radical democracy is, more than ever, our best hope.

Must-read: such insight, an awakening!

What did you love best about The Democracy Project?

This is one of the handful of gems that make you think in profoundly-different ways.

I heard excellent reviews of Mr. Graeber's book "Debt: the First 5000 Years", but I thought I'd like a more general book to start with and this was perfect.

Explores our assumptions of "democracy", and how Corporate and Government bureaucracy are top-down hierarchies which are quite simply contrary to real democracy.

I've often assumed "anarchism" was somehow extreme or unrealistic, but this book made a very compelling case for how horizontal decision-making is desirable and even practical, featuring numerous real-life examples along with common sense analogies.

Only special books manage to shake one from one's stupor, or present clear explanations for those nagging ideas that were never understood. This is a lot to ask for, but this book delivers!

On top of everything, this book is surprisingly uplifting. Revolutions and revolutionary ideas do indeed cascade into society and our collective consciousness, often seemingly against all odds.

These book connected so many dots and opened up a new world of ideas and possibilities. For a non-fiction, that is the highest accolade.

there's a something magic about this book.

I loved the book, but if I had to recap it, it would be hard. The book moves between history and the events of OWS and sums up some thoughts of possible future. I would love an entire book just going through the future of an anarchy world.

Graeber smashes vast society-spanning topics into relatable snippets that make you think about... well, everything! Amazing, 10/10

Not as good as Debt

Didn't finish. Mainly it's because I couldn't help thinking about how the occupy movement ultimately had very little effect on much of anything. However, if you need some tips on how to organize your social/political movement, it might be helpful.

In depth but approachable and extremely interesting book. Must read. Covers the broad concepts and big questions you find yourself asking in the currently political climate.

the graeb does it again

I loved this book. it was very thought but not too dense or academic. this book largely focuses on occupy wall street which was a pleasant surprise but adds both a global and historical perspective.

Why is it that so many intelligent people talk as though there is no alternative to capitalism? Capitalism does not equal freedom, nor democracy. It is our duty as citizens to study alternatives -especially anarchism. We are already anarchists.

This is a very thought provoking book about the way our current political structures came to be.