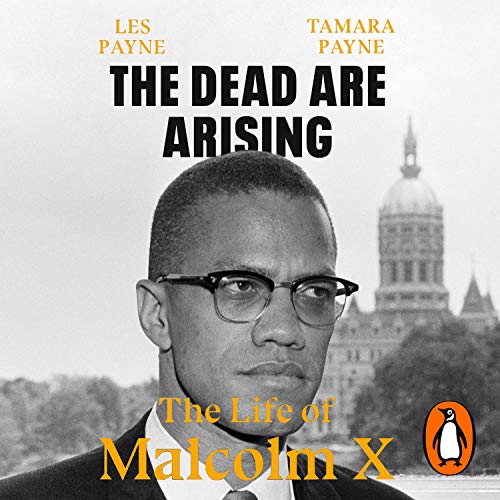 Longlisted for the National Book Awards 2020.

A landmark biography of one of the 20th century's most compelling figures, rewriting much of the known narrative.

Les Payne, the renowned Pulitzer Prize-winning investigative journalist, embarked in 1990 on a nearly 30-year-long quest to interview anyone he could find who had actually known Malcolm X - including siblings, classmates, friends, cellmates, FBI moles and cops and political leaders around the world. His goal was ambitious: to transform what would become hundreds of hours of interviews into a portrait that would separate fact from fiction.

The result is this magisterial work that conjures a never-before-seen world of its protagonist, whose title is inspired by a phrase Malcolm X used when he saw his followers stir with purpose to overcome the obstacles of racism. Setting his life not only within the political struggles of his day but also against the larger backdrop of American history, this remarkable masterpiece traces his path from street criminal to devoted moralist and revolutionary.

An author who saw Malcolm X speak and could not stand the phrase 'we may never know', Payne writes cinematically from start to finish and delivers extraordinary revelations - from a hair-raising scene of Malcolm's clandestine meeting with the KKK, to a minute-by-minute account of his murder in Harlem in 1965, in which he makes the case for the complicity of the American government.

Introduced by Payne's daughter and primary researcher, Tamara Payne, who, following her father's death, heroically completed the biography, The Dead Are Arising is a penetrating and riveting work that affirms the centrality of Malcolm X to the African American freedom struggle and the story of the 20th century.

One of the most important yet dangerous of men

Absolutely brilliant book filled with facts and information. Felt a little bit like the stuff you see on TV that spends hours devoted to the background story and then runs out of time and rushes through the last 30 minutes of the program though. Having said that, I would highly recommend it.

I read Malcom X’s autobiography first , before I chose listening to this . It also is my first audiobook. It has complemented the knowledge acquired by the autobiography greatly, offering a balanced and also fresh account of Malcom and his life’s events (I.e reason of his father’s death. I personally found the background info on Marcus Garvey very interesting. In short an excellent audiobook.

This book is so exceptional that I struggle to find the words to write a review here that would come close to doing it justice.

There was a thread on Twitter recently asking ‘what’s the book that has challenged you to readjust previously held beliefs’ - this book is that for me.

I’ll be amazed if this book doesn’t win multiple awards - it deserves to.

Most In depth bio of Malcolm X - compelling!

Read the Autobiography 20 years ago and watched film by Spike Lee and recent Netflix special my wife gave me this as a gift.

Moving poignant and well researched for me this is a master work of history.

Malcolm was ahead of his time and should be celebrated.

Both Les Payne (God have mercy on his soul) and Tamara Payne have done a great service to the legacy of Malcolm X in presenting new information and extensive research into his phenomenonal life. After listening to the audiobook of Malcolm's autobiography by Lawrence Fishburne, 'The Dead are Arising' is a natural literary progression. This book provides further information around the events of the autobiography and delivers a balanced view. The answers written by Malcolm in the Epilogue, show the continued and refreshed stance he observed towards the plight of his fellow 22 million African-Americans and indeed towards orthodox Islam. The chapter on his assassination (The Hit) brought tears to my eyes and filled me with a great zeal, love and respect for Malcolm's ideals and in how he lived his life. An excellent audiobook, one which I look forward to revisiting again soon.

Any autobiography will inevitably, consciously or unconsciously, have an element of self-editing or self-censorship. So this book is a valuable follow on to the Autobiography as told to Alex Haley. The emphasis of Garveyism in the Little household was an instructive stage setter.
I marked some of the overall review down to a 4 because I think that it was a glaring mistake to have an important near end of life interview in the appendix rather than the main book. The other, minor crticism, was that it wasn't made clear whether the Arabic 'gibberish' used in the NOI Temples was being used perjoratively, in that it was genuine Arabic, or being used by people who didn't understand what they were saying. The clandestine meeting between the NOI and the Klan that clearly made Malcolm uncomfortable and was at odds with his own feelings, was a shocking revelation. The book also does a good job in chronicling the creeping doubts and the utter hypocrisy of the NOI and its cynical misuse of its followers. Overall a good contribution to the literature on Malcom X.

A great piece of work that goes into historical details and gives much background information, at times almost too much. The tone is neutral and gives his life with critical perspective. Well read with great intro by Tamara Payne, read by herself, A great audiobook, that you can't stop listening to, though, be warned brutal and ferocious in its telling of Jim Crow racist America. May not be suitable for some listeners, and needs a warning on that ground, certainly not for younger listeners.