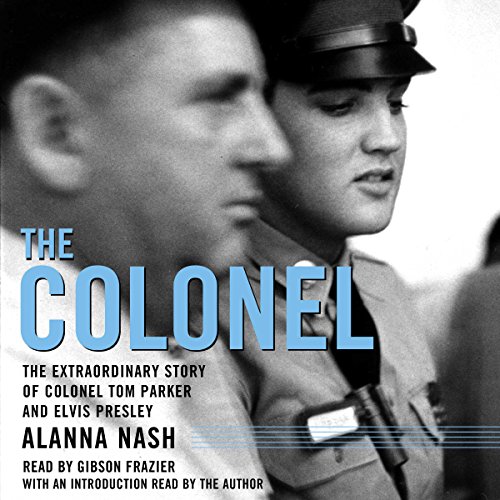 In The Colonel, Alanna Nash, the author of Golden Girl: The Story of Jessica Savitch, explores in depth the amazing story of Colonel Tom Parker, the man behind the legend and the myth of Elvis Presley. The result is like the most riveting of real-life detective stories - one that will completely change your view of Presley's life, success, and death.

While scores of books have been written about Elvis Presley, this is the first meticulously researched biography of Tom Parker written by someone who knew him personally. And for anyone truly interested in the performer many consider the greatest and most influential of the 20th century, it is impossible to understand how Elvis came to be such a phenomenon without examining the life and mind of Parker, the man who virtually controlled Elvis' every move.

Alanna Nash has been covering the story of Elvis Presley and Colonel Tom Parker since the day of Presley's funeral in Memphis, Tennessee. She was the first journalist allowed to view Presley's body, a compelling and surprising sight. But the profile of Parker attending the funeral in a Hawaiian shirt and a baseball cap was even stranger and led her to investigate the man behind the myth.

It has been known for 20 years that Thomas Andrew Parker was in fact born in Holland as Andreas Cornelis van Kuijk. But Nash has dug much deeper and, in a masterpiece of reporting, unearthed never-before-seen documents, including Parker's army records and psychiatric evaluations and the original police report of an unsolved murder case in Holland that lies at the heart of the Parker mystery. In the process of weighing the evidence, she answers the biggest riddle in the history of the music industry, as it becomes clear that every move Parker made in the handling of Elvis Presley - from why he never allowed Elvis to perform in Europe, to why he didn't halt Elvis' drug use, to why he put him in so many mediocre movies and even the Colonel's direction of Presley's army career - was designed to protect Parker's own secrets.

Filled with startling new material, her book challenges even the most familiar precepts of the Presley saga - everything we presumed about Parker's handling of the world's most famous entertainer must now be reevaluated in the light of information Nash reveals about Parker.

Elvis Presley, as one of Parker's unwitting victims, paid a major price for the Colonel's past and his overwhelming need to be more important than his client. As a result Presley was never allowed to reach his potential and died in drug-induced frustration over his stunted and mismanaged career.

In this astonishing, impeccably written, and vastly entertaining book, Nash proves that the only figure in American popular culture as fascinating as Elvis Presley is Colonel Tom Parker, the man who shaped Elvis, who in turn helped shape us.

Alanna Nash's first Elvis audible is a must listen

I have been a fan of Alanna Nash's books covering Elvis Presley for several years. I have read many Elvis novels, and her work is always expertly researched and honest yet gentle with this family that so many of us around the world know and love. This is the first of her novel's that has made it to the audible audiobook library in recent years, and it is AWESOME. Alanna gives a wonderful introduction and her narrator - Gibson Frazier is fabulous. He performs the voices of the characters with an authenticity that pulled me right into the reading of this book. I listened to it over a 48 hour time frame because it was so well done. Indeed, I found myself wondering what Gibson would do if he were to narrate the Memphis Mafia text that Alanna wrote... (no pressure Alanna).

Having lived in the world of Elvis fandom all of my 40 years that I have been alive, I know I can issue all kinds of judgements and statements about what I think went on between Elvis, the Colonel, EPE, Priscilla, etc. and have 10 people come at me with facts and figures that will make me want to delete this very review. Indeed, it is amazing how many Elvis experts there are today with the rise of social media and the ability to google every topic our little hearts want to know more about. That being said, this text was originally published in the early 2000's after Alanna had put at least six years of research into it. So if I am going to go with an authentic Elvis expert who I KNOW walked where Elvis walked - I will go with Alanna Nash each and every time.

Bravo Alanna! Thank you for getting this to audible for us, and I can't wait for the next one to make its way here!

Boring with a capital B!

I chose this book thinking it was about the relationship "Colonel" Tom Parker had with Elvis. This book ended up being a dry, boring account of the fraud Tom Parker was with a little Elvis thrown in for good measure. I couldn't even finish it. Don't waste your money or time!

First 4 hours were a snore. Not a good book. Way to long and could of been 2 hours long.

This is my first Alanna Nash book 📖 I’m not the BIGGEST fan of the Colonel (the person) I found this book very intriguing and once I started reading it I couldn’t Stop! It Explains a lot! Found parts of it very sad. Col. Parker Was Cunning, a hustler, and a con artist! He was good for Elvis in the beginning! But like 61’ or 62’ on ward he was Over Stepping his bounds! He lied to Elvis about A LOT of things! & held him back from doing things he wanted to do. All Parker cared about was the Money! 💰 and Not getting deported or going to jail!!! So I Dislike Col.Parker Even More! LOVED THIS BOOK!!! Alanna did a fabulous job! 👍🏻 Now I’m reading another of her books! 📚

an inside look at an amazing story...
kind of sad how the author accused him of everything from murder to petty theft.. if you can read above the author's bias great read

The real Colonel and Elvis story.

This was a real look behind the Elvis and Colonel relationship. Also one of the most revealing look of Elvis Presley's last year's.

A glimpse behind the curtain with great payoff

Really neat book and very interesting for any EP fan that wants to learn more about The Colonel. This is really well researched and Nash chose a very wise format in chronologically approaching the subject matter. It's a warm start but it picks up and helps to shed a great deal of light on the giant ambiguities of the King's career. I don't want to spoil any of this so I will just leave it at that.

If you are looking for a book that just burbles on about Elvis, you won't like this. But if you enjoy books that go into the lives of his entourage (the Memphis Mafia, his lovers, etc.) this is an absolute must.

Excellent book for the understanding of a great promoter little talked about. Explains a lot.

Even if you aren’t an Elvis fan, this is a great and strange tale of an eccentric persona and very complicated relationship with the first superstar of modern time. It comes across as well researched and presents the facts without telling the reader/listener what to think. The narrator does an excellent job with every accent between Dutch and southern and everything in between. Highly recommend.