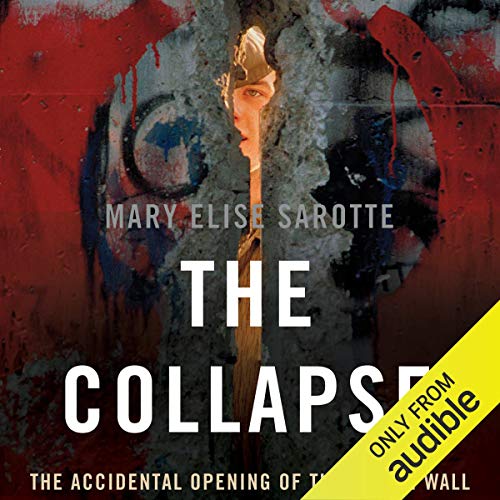 The Berlin Wall was erected in 1961 to end all traffic between the city’s two halves: the democratic west and the communist east. The iconic symbol of a divided Europe, the Wall became a focus of western political pressure on East Germany; as Ronald Reagan’s famously said in a 1987 speech in Berlin, “Mr. Gorbachev, tear down this wall!” But as award-winning historian Mary Sarotte shows in The Collapse , the opening of the Wall on November 9, 1989 was not, as is commonly believed, the East German government’s deliberate concession to outside influence. It was an accident. A carelessly worded memo written by mid-level bureaucrats, a bumbling press conference given by an inept member of the East German Politburo, the negligence of government leaders, the bravery of ordinary people in East and West Berlin - these combined to bring about the end of nearly 40 years of oppression, fear, and enmity in divided Berlin. When the news broke, Washington and Moscow could only stand by and watch as Tom Brokaw and other journalists narrated the televised broadcast of this critical moment in the thawing of the cold war. Sarotte opens her story in the months leading up to that fateful day. Following East German dissidents, she shows how their efforts coalesced around opposition to the regime’s restrictions on foreign travel. The city of Leipzig, close to the border with Czechoslovakia, became a hothouse of activism, and protests there quickly grew into massive demonstrations. The East German Politburo hoped to limit its citizens’ knowledge of these marches, but two daring dissidents, East Berliners Aram Radomski and Siegbert Schefke, managed to evade the Stasi and film the largest of them from a church tower.

Great blow-by-blow description of what happened

The Good: The fall of the wall was not easy to understand from the news accounts at the time. We all knew *what* was happening, but not *why*. This book explains the big political picture and gives an exciting account of who did what, when and why in November 1989. I found the audiobook as hard to put down as a well-written thriller. And it was fascinating to see how easily things could have gone differently.

The Bad: Hard to find anything bad to say about the book. The narration was competent and clear, but it didn't knock my socks off, so I gave it four stars instead of five.

The historical recount this book gives is both compelling and illuminating. It outlines the political forces that surrounded the fall of the wall and the individual people whose decisions made it happen. Outstanding history!!

A Testament to Will

A good listen, it is impressive how the author has constructed this account. Thoroughly researched, the epilogue also provides a good analysis of why events unfolded the way that they did.

A thriller where you least expect it!

The story of the fall of the Berlin Wall has been told many times but not like this! The amount of research that has gone into writing this is staggering and is amazingly matched by the storytelling - at many points it was like watching an episode of 24 with edge of the seat action ( even though the ending is known!) told from multiple perspectives. And so many lessons to learn from this historic moment, not least the fact that revolutions happen because of the little things.

Narrator's voice was difficult to listen to.

I have tried several times to listen to this book, but the narrator's is so monotone that I drifted off many times. I'm sure the story is fascinating, I just can't get there.

A really interesting history of how the wall fell

This book is perhaps not as slickly written as it might be, but it is a fantastic read nonetheless - because the story itself is so interesting - a story that is a such a fantastic series of screw ups by the East German government that if this was fiction you would find it hard to believe!

Even if you aren't into history or politics this is still an interesting read/listen.

Not what you’re taught in history class

The Collapse is a great story about an event in modern history. How even in such a short time a narrative has been constructed and disseminated to the masses. When in fact the true story, or the more detailed is much more interesting. Anyone interested in the Cold War should read/listen to this book

A series of fortunate events?

The Fall of the Berlin Wall is one of those events that are burned into my memory. I was a child of the Cold War and hoped, but never believed, I would see in my life time the fall of the Berlin Wall and the break up on the Soviet Union. After the crack down and blood shed of the Tienanmen demonstrations, the seemingly unexpected and peaceful opening of the Wall was just too good to be true. Interestingly I never really understood how it all came about and how regular East Germans where the catalyst, particularly Christian ministers, in setting the ball of discontent in motion. The well researched and written book was surprisingly moving. I would recommend this to anyone who likes a good story.

A stirring account of an historic event. I learned much that I did not know.

As a person who listens to hundreds of history books, I can attest to this being extremely gripping and in my view original.
I didn't realize that I was particularly interested in this subject until this book, now I have become quite nerdish on this period as a result of it.
Truly good book.