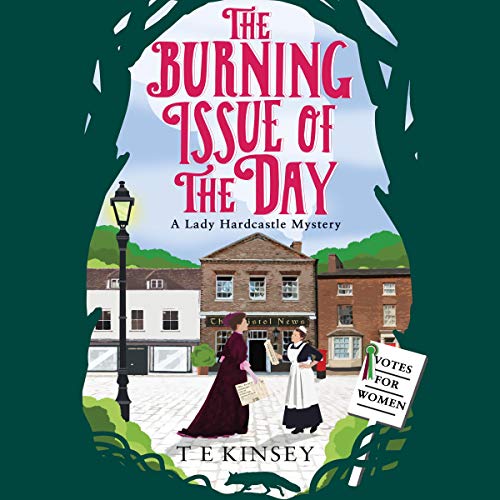 The Burning Issue of the Day

January 1910. A journalist has been killed in a suspicious blaze. Everything points to a group of suffragettes, but the apparent culprit insists she is innocent.

When Lady Hardcastle receives a letter from a suffragette requesting her urgent help, the retired spy turned sleuth knows only she stands between an accused young woman and the gallows. Evidence at the scene makes Lizzie Worrel’s innocence difficult to believe, and with the police treating it as an open-and-shut case of arson, Lady Hardcastle faces a barrage of resistance as she tries to dig out the truth.

With her trusted maid and confidante, the formidable Flo, Lady Hardcastle sets off in pursuit of the truth as time runs out for the accused suffragette. Was she set up? And if so, is the real culprit a traitor to the cause - or part of a darker conspiracy?

The Burning Issue of the Dayに寄せられたリスナーの声

The Lady Hardcastle Mysteries have become my absolute favorite! The Narration is perfect and the characters and storylines are just wonderful. T E Kinsey has such a talent for creating characters that are so believable, likable and witty, I often find myself forgetting they are in fact fictional. Please keep the books coming, I wait with excitement for the next installment!

I listen to these stories over and over again. I really enjoy EK's beautiful voice. And she does an OUTSTANDING job of making all the characters come to life.

I have not enjoyed an audio book this much in years. The reader is extraordinary. She brought Lady Hardcastle and her tiny servant, Flo, to vivid life with perfect voices for each of them. All the other characters we have grown to love had wonderful characterizations too. I have never heard anyone else do so many voices and accents. I am going to get all the others even though I have already read them. Miss Knowlton makes them come alive.

Love the banter between Lady H and Armstrong, so much better than last book. Story was full of fun, adventure, mystery and over all a real treat. Didn't want to put it down.

This series just keeps getting better!

As the series progresses, the humor has gotten sharper, the dialogue snappier, relationships deeper and the crimes more complex. I'm greatly enjoying watching the main characters blossom and relationships with friends and foes change. Still fun romps. but getting better with each book
I highly recommend this series.

In The Burning Issue of the Day by T.E. Kinsey, Lady Hardcastle receives a letter from Lady Bickell of the suffragette Women’s Social and Political Union (WSPU), begging her and her lady’s maid, Florence Armstrong, to save the life of one of their members. Mr. Brookfield, a journalist who has often been antagonistic towards their cause, has been killed in an arson fire, with WSPU pamphlets spread everywhere and a note purporting to come from WSPU member Lizzie Worrel and claiming responsibility. Lady Bickell is certain that Lizzie would never have committed this crime, and she urges Lady Hardcastle and Flo to free her friend by finding the true culprit.

The pair get involved in the investigation, involving their good friend, Inspector Sunderland, in the case. Soon they join forces with their former adversary, journalist Dinah Caudle, who has found Brookfield’s notebook. The problem is that it is in code, and it takes a long time for Lady Hardcastle to break it. They additionally find themselves getting entangled in further crimes and involved in more adventures.

As with all the books in this series, The Burning Issue of the Day is exciting and fun. I enjoyed the historical background to the book, including details about the methods that the suffragettes in Britain used to gain attention to their cause. They would break windows while leaving leaflets about women’s suffrage in order to get people to pay attention to the effort to get votes for women. The book contains an afterward explaining the historical accuracies found within. I appreciated seeing the extent of the research Kinsey put into making the book as true to the history as possible.

This book, as in all of Kinsey’s, is full of clever word play and fun linguistic jokes, with a lot of teasing back and forth between Lady Hardcastle and Flo that made me laugh. The characters add to the flavor and make the book all the more delightful.

Elizabeth Knowelden performs the audio edition of this book, and she does an amazing job of making the book come alive. With a strong sense of the book’s flavor, Knowelden uses a fast pacing that suits the style of the word play used throughout the book. I have trouble imagining this book being read any better by anyone else.

I greatly enjoyed getting to listen to The Burning Issue of the Day as much as all of Kinsey’s other books. It was such a fun book that delighted me immensely. I give the book five stars.

These are good mysteries. However, I’m disappointed in the amount of whispering. It’s very difficult to have an audiobook on in the background when the volume is so inconsistent. Where is the producer when books migrate into so much whispering. Lady Hardcastle yells; her companion whispers in first person. So every sentence goes up and down. The voices are well done, but I can’t give the narration more than a 2 because of the frustration of turning the volume up then down then up again, and sometimes having to rewind when I didn’t catch it in time.

waiting for the next installment

i love this author. keeps me company every morning for the treadmill routine. the narrator draws me fully into the story

A wonderful way to pass the weekend. The narrator is so easy on the ears.

I have loved this series the characters are just lovely Lady Hardcastle and Flo are two the most adorable people you would ever want to meet they are witty with many laugh out loud moments, in fact I think I could easily fall in love with Flo as long as I didn't annoy her ;)
I have read some comments about how believable it is having these two ladies sleuthing and the police allowing it well millions like Miss Marple and these two are no different just a lot more amusing.
As for the narration well Elizabeth is first class and she makes Flo come to life and she is very good with the other characters too including the men parts. I really can't wait until the next book is written.

I enjoy the characters and the setting. It is not 'edge of your seat' or nail biting but it is thoroughly entertaining and I rather like the clarification of the true history parts at the end.

A great amount of brilliant dialogue

I’ve now listened to all 6.5 books in this series and in my years of reviewing over a 1000 books for Amazon / Audible and good reads this series is the most entertaining and enjoyable of them all. Well fine that author TEKinsey

I just love these books!

thoroughly enjoyable, light hearted and engaging. these books are read by the perfect narrator who captures the character's personalities perfectly.

Another brilliant adventure from Lady Hardcastle and Florence Armstrong. Narrator Elizabeth spot on as usual.

Intrigue and double plots, nice to see our lovely detective again but not as interesting as previous tales.

The Burning Issue of the Day

Another historical mystery that is ingenious and funny. A most enjoyable listen with Elizabeth Knowelden voice.

Another fantastic book about Lady Hardcastle and Florence Armstrong, her lady's maid. The two characters bounce off each other beautifully. The story was very interesting and the plot was great. The narration by Elizabeth Knowelden was wonderful, as always. Elizabeth has a talent for bringing the characters to life.
An all round enjoyable experience.

First of this series I tried . Thoroughly joined wit the delicious romp with a good story line 😁 Liked the fact check at the end too .
Will be getting to know these characters more I think .

Rather a silly story - disappointing!

I have struggled to listen tothis silly story, the characters were simpering and seemed rather silly women, I hope that was not how women were in the day, rather more down to earth and intelligent. I cannot continue.