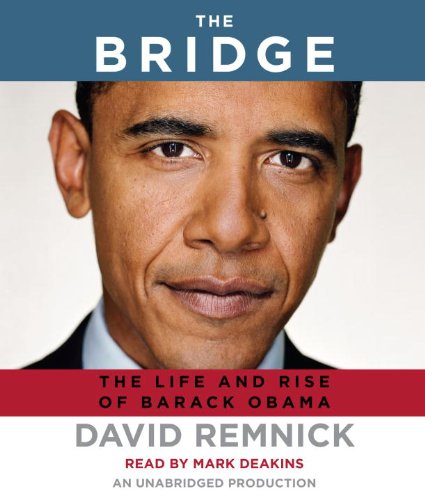 No story has been more central to America's history in this century than the rise of Barack Obama, and, until now, no journalist or historian has written a book that fully investigates the circumstances and experiences of Obama's life or explores the ambition behind his rise. Those familiar with Obama’s own best-selling memoir or his campaign speeches know the touchstones and details that he chooses to emphasize, but now, from a writer whose gift for illuminating the historical significance of unfolding events is without peer, we have a portrait, at once masterly and fresh, nuanced and unexpected, of a young man in search of himself and of a rising politician determined to become the first African-American president.

The Bridge offers the most complete account yet of Obama’s tragic father, a brilliant economist who abandoned his family and ended his life as a beaten man; of his mother, Stanley Ann Dunham, who had a child as a teenager and then built her career as an anthropologist living and studying in Indonesia; and of the succession of elite institutions that first exposed Obama to the social tensions and intellectual currents that would force him to imagine and fashion an identity for himself. Through extensive on-the-record interviews with friends and teachers, mentors and disparagers, family members and Obama himself, David Remnick allows us to see how a rootless, unaccomplished, and confused young man created himself first as a community organizer in Chicago, an experience that would not only shape his urge to work in politics but give him a home and a community, and that would propel him to Harvard Law School, where his sense of a greater mission emerged.

Good biography even if you know the story

I've read quite a number of books about Obama, from the ones that were available during the 2008 campaign like David Mendell's "Obama: from Promise to Power" to the ones covering his first year in office like Richard Wolffe's "Revival", Bob Woodward's "Obama's Wars" and Jonathon Alter's "The Promise", not to mention Obama's two books. I list these books to brag but rather to show how David Remnick's book "The Bridge" is different.
Even though Remnick's book goes through all the events of Obama's life like any biography would, it offers an analytical look into those events. It reviews Obama's first book and tries to look into the author's intentions sometimes. It's a little skeptic on some aspects of the author memories of certain events. Maybe my focus on this analytical look is because I've read an Obama biography before, but I think it's also because it's the intention of Remnick who chooses to cover the 2008 campaign in its relation to Race rather than cover the day to day events or uncover new secrets like "Game Change" does for example.
However, the book does shed some light on events that weren't covered in other biographies of Obama like this time in Hawaii, the story of his mother, the process of selecting him as president of the Harvard Law Review, and other.
One thing I like about "The Bridge" is the dive into the history of other characters that affects Obama's life even in indirect ways. The election of Harold Washington as Mayor of Chicago is a good example. Also, I liked the review of Obama's performance as a Law Professor, it's a good indication of how thinks.
I listened to the audio version of the book and the narrator does a good job at changing voices to reflect the different characters participating in any dialog. He's at good pace and made following a 20+ hours books easy.
"The Bridge" is a good biography of Obama whether you already read another biography or not. Hope you enjoy it too.

If you like biographies and if you like Obama, you will like this book. The author provides a lot of context as he walks us through the life and meteoric rise of this man. However, it does not include, as I had hoped, a serious analysis of Obama's political philosophy.

Amazing book! A must - read for fans of history

I almost didn't give this book five stars because the narration was awful - the narrator mispronounced names and places, and used the same cadence throughout, no matter what the actual text was. But I found the content to be so incredible that I had to give it a 5.

This is definitely the definitive account of Obama's public life up until his election. This is probably the 6th book on or by Obama I've read / listened to, and I still learned a ton. And it tied his life and achievements into a social context in a way I've never seen done before. What a masterpiece.

This would be the if you only read one book on Obama, read this one' book I'll recommend to people from now on.

I usually avoid biographies of partial lives lived but was intrigued not only by the person - Barack Obama- but also by the changing cultural forces that resulted In the election of America's first African American President. Based on these two criteria, I found the Bridge both a worthy biography of the man but also of "the times", ie. the past fifty years of the struggle for civil rights and equality that made the election of an African American as President possible. Throughout this thoroughly detailed and enlightening book, Remnick profiles Obama's life, from fatherless child of an itinerant mother, through his search for identity as a youth, professional and political rise to his election as President while also embedding that remarkable story within the context of a changing American civil rights landscape. I found this book informative and inspirational and whether you are a supported of Obama or not, the story of his rise and achievements, perhaps mirroring that of America itself over the past half century, is well worth the read. I hope that one day, post Presidency, Remnick writes and releases a volume II that chronicles the complete story of Barack Obama.

Excellent depiction of the rise of Obama

Loved the presentation. Clearly a good writer. Leans toward Obama's favor, but I liked that. You want to hear about people through the lens that they want to be heard, then make your own judgment with outside information.

I wanted a book that would tell the life and rise of Barack Obama, like the title suggests.. it does cover all of that, but I would say almost half of this book is more to do with civil rights and slavery. I understand that being the first black president is an amazing accomplishment, but this book went overboard.

When speaking of Barack's life, the author spends a great deal of time paraphrasing earlier books written by Obama himself. I learned a great deal about the former president by listening to this audiobook but for the length of it, I feel like it should have covered a lot more on him and a lot less on unrelated matters.

i was reading this because i missed Obarma so much

it was interesting to see were a great PRESEDENT came from and how he met his wife lived the book and thank you for keeping my mind off of Trump , it's so hard to have a great Preserdent and then this guy in office .