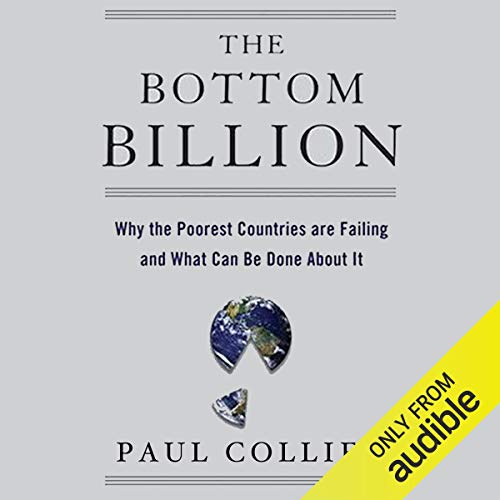 "Set to become a classic. Crammed with statistical nuggets and common sense, his book should be compulsory reading." ( The Economist)
"If Sachs seems too saintly and Easterly too cynical, then Collier is the authentic old Africa hand: he knows the terrain and has a keen ear.... If you've ever found yourself on one side or the other of those arguments -and who hasn't? - then you simply must read this book." (Niall Ferguson, The New York Times Book Review)

In the universally acclaimed and award-winning The Bottom Billion, Paul Collier reveals that 50 failed states - home to the poorest one billion people on earth - pose the central challenge of the developing world in the 21st century. The book shines much-needed light on this group of small nations, largely unnoticed by the industrialized West, that are dropping further and further behind the majority of the world's people, often falling into an absolute decline in living standards.

A struggle rages within each of these nations between reformers and corrupt leaders - and the corrupt are winning. Collier analyzes the causes of failure, pointing to a set of traps that ensnare these countries, including civil war, a dependence on the extraction and export of natural resources, and bad governance. Standard solutions do not work, he writes; aid is often ineffective, and globalization can actually make matters worse, driving development to more stable nations.

What the bottom billion need, Collier argues, is a bold new plan supported by the Group of Eight industrialized nations. If failed states are ever to be helped, the G8 will have to adopt preferential trade policies, new laws against corruption, new international charters, and even conduct carefully calibrated military interventions. Collier has spent a lifetime working to end global poverty. In The Bottom Billion, he offers real hope for solving one of the great humanitarian crises facing the world today.

Collier lays out a comprehensive survey of what has caused this situation and the challenges of bringing solutions to it. Many of his research based observations are initially counter intuitive, until you get to hear about the bizarre incentives to good as well as bad behavior. Solid narration.

I wanted to discover the issues facing the poorest, what has worked and what hasn't and I got it.

I only wish there was a prologue that included the events that took place in the 10 years after the book was written. I feel that I have a gap in my knowledge.

Highly recommended to anyone interested in humanitarian aid, policy and what can be done about the poorest of the poor.

A must read for global citizens

A fascinating book, though not always easy to follow, that explains the financial side of national poverty. Important for every person who has ever considered donating to poor countries

Great audio book. Well written. The reader is very good. I am an economics graduate student. I feel it helps me a lot in understanding how econometrical approach can be used to analyze various real world issues in economic development.

Blueprint to close the gap

I read The Bottom Billion over a year ago but saw it cheap on Audible since I own the kindle version and decided to give it another listen. Talks about the gap between the developed economies versus those with citizens from the bottom billion of the poorest people on the planet and why the gap is expanding instead of narrowing. The traps include resource trap, land locked trap, conflict trap (military coup prone), unstable neighbors trap, etc. They also are impacted by adverse migration patterns that often lead to a brain drain of the talent that could help pull the country out of the economic morass leaving for green pastures in developed countries. The traps form a perfect storm for much of Africa and explains much of the economic struggles there. Collier discusses options to help close the gap starting with the common response that has limited impact of direct aid through more impactful tactics that could truly help.

Is poverty a disease or a wound?

I really enjoyed this, primarily UN centric, treatment of the hidden realities of that group of people who rarely make the news. If you're an international traveler, these are the people that you see walking in the broiling sun, or begging on the side of the road.

Yet, the book is hopeful in offering new solutions, some that may interest business people such as low end insurance products.

Overall this book was compelling, and interesting from start to finish.

Eye opening book for anyone who wants to start understanding a bit more the development space and what can be done about it.

Easy to listen too.
Good book
Recommended to everyone seeking analysis on why our world is the way it is today.

Great use of data

Great use of data. It would have been nice to have shown some of the raw data.

After the first hour or two I thought I'd hate this book - the author is extremely egotistical and uses most of his own work to back himself up (and name-drops all his friends and academic colleagues for no real reason).
However, I ended up appreciating his arguments, even the extremely contentious ones. He argues his points clearly and admits the limitations of his conclusions. And I ended up, if not agreeing, then seeing the potential merit in his ideas.
There is definitely a focus on economic poverty, and I would argue that this misses somewhat of the picture, as poverty is also about the lived experience and social aspects too.
In all, if you're wanting to get one person's opinion on global poverty, then this book is good. Just make sure to get other opinions from other books too.

One of the best books I've read on development so far. It applies statistics to an area that largely seems to be governed by theory and overall provides a balanced view on effective development strategies.

incredible insight into the developing world

This was an amazing insight into new and innovative ways at looking to the future of aid, trade and development of the third world. it also explained the success seen in Brazil, China, India, and much of Africa. The narrator also had a wonderful voice.