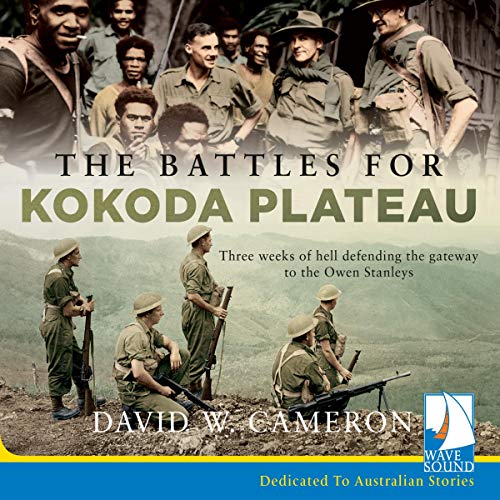 "The Japanese attacked us, they mortared us, they shelled us...they did everything."

On 21 July 1942, a large Japanese reconnaissance mission landed along the north-eastern coastline of Papua. It would soon turn into an all-out attempt to capture Port Morseby. This is the powerful story of the three weeks of battle by a small Australian militia force, the 39th Battalion, supported by the 1st Papua Infantry Battalion and the Royal Papuan Constabulary, to keep the Japanese at bay. Outnumbered by at least three to one, they fought courageously to hold the Kokoda Plateau - the gateway to the Owen Stanleys.

Desperately short of ammunition and food and stranded in the fetid swamps and lowland jungles, they did everything they could to keep the Kokoda airstrip out of Japanese hands. Not far away, and desperately trying to reach the Australians, were two groups of Anglican missionaries trapped behind enemy lines. With each passing day the parties grew, joined by lost Australian soldiers and downed American airmen. Theirs is a story of tragedy and betrayal.

Using letters, diaries and other firsthand accounts, from friend and foe alike, leading military historian David W Cameron has for the first time written a detailed, compelling and provocative account of what occurred at the northern foot of the Owen Stanleys in late July and early August 1942. These are stories that deserve to be firmly embedded into the Kokoda legend.

The Battles for Kokoda Plateauに寄せられたリスナーの声

Very detailed account of the first weeks of the Japanese thrust toward Port Moresby. Geography plays a huge role in this narrative, so before starting book, studying maps of the region makes following the story much easier and more meaningful.
Events are described by the survivors, people who were there and are grueling and vivid.
Narration done with a thick Aussie accent, entirely fitting.

A validation of the courage of those on the track

Thoroughly researched, brilliantly written and masterfully narrated. A valuable attestation to the courage and fortitude of our Australian, US and PNG servicemen and women, as well as the brave civilians caught up in the Kokoda campaign of 1942.

Thanks for keeping the truth alive. Lest We Forget. The information conveyed is of eternal importance. Brave men and women all.

Good listen for those interested in WW2.
some minor complaints but all in all worth your time.

Such a well written account of what happened in the early days of the Kokoda campaign.

I enjoyed listening and feel I have a much better understanding of the Kokoda fight.

It did end very abruptly leaving me looki for a book on the rest of the Kokoda campaign. But it really brought out how much the 39 th and the PNG Forces did in in the beginning of the over all battle for Kakoda track