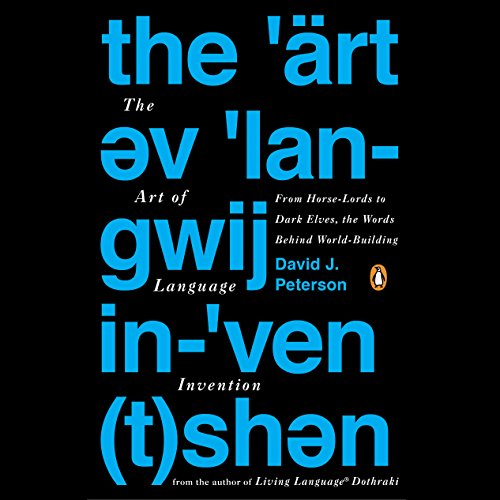 The Art of Language Invention

“David Peterson's language work transformed our show, investing it with a sense of reality and history that would have been impossible without him. There's nothing like the real thing, and David Peterson is it. This fascinating book will not only illuminate the task of language creation - it will make you look at your own language in a whole new way.” (David Benioff and D.B. Weiss, co-creators of HBO's Game of Thrones)

“David J. Peterson’s The Art of Language Invention accomplishes a minor miracle in taking a potentially arcane discipline and infusing it with life, humor and passion. It makes a compelling and entertaining case for language creation as visual and aural poetry. I cherish words, I love books about words and for me this is the best book about language since Stephen Fry’s The Ode Less Traveled. And, best of all, there’s a phrasebook!” (Kevin Murphy, co-creator and showrunner of Syfy’s Defiance)

An insider's tour through the construction of invented languages from the best-selling author and creator of languages for the HBO series Game of Thrones and the Syfy series Defiance.

From master language creator David J. Peterson comes a creative guide to language construction for sci-fi and fantasy fans, writers, game creators, and language lovers. Peterson offers a captivating overview of language creation, covering its history from Tolkien's creations and Klingon to today's thriving global community of conlangers. He provides the essential tools necessary for inventing and evolving new languages, using examples from a variety of languages including his own creations, punctuated with references to everything from Star Wars to Michael Jackson. Along the way, behind-the-scenes stories lift the curtain on how he built languages like Dothraki for HBO's Game of Thrones and Shiväisith for Marvel's Thor: The Dark World, and an included phrasebook will start fans speaking Peterson's constructed languages.

The Art of Language Invention is an inside look at a fascinating culture and an engaging entry into a flourishing art form - and it might be the most fun you'll ever have with linguistics.

The Art of Language Inventionに寄せられたリスナーの声

Great resource, but not conducive to audiobook

Peterson is one of the foremost voices in language invention today, but this book didn't really lend itself to an audio production. Keep the PDF included with your audible purchase close at hand in order to follow along. It would've been more helpful to have actually cited the page number of the PDF, rather than him just saying, "refer to your PDF," as the PDF is 50+ pages long.

Otherwise, this is a great resource for those wanting to create their own language or are wanting to better understand the process of language invention and linguistics.

What did you love best about The Art of Language Invention?

All the languages on Earth are the core of fascination for linguists. David Peterson is not just a specialist in existing languages but also a language constructor ( in abridged form: conlanger ). He is most popular thanks to Dothraki or Valyrian language in George R. R. Martin’s productions as Game of Thrones and A Song of Ice and Fire. Peterson's creations were recognized in the public sphere which is television, yet little of the audience knew how complex the languages in these series were. Nonetheless, David Peterson seems to be sufficiently satisifed with the appearance of the language itself; its influence on the environment in which the movie or series is set. The videoblogs on Peterson’s YouTube channel raise the correlative subjects and holds the same title as the followingly reviewed work. The other book that Peterson wrote was “The Living Language Dothraki” describing the main fictional language in Game of Thrones.
The art of Language Invention may be defined as an indispensable guidebook for people who are willing to or already construct naturalistic fictional languages. It discusses the most crucial and challenging elements that a language normally contains. In the Postscript (p.251, p. 252) warns the readers that the handbook is exclusively for those who want to create naturalistic conlangs, i.e. artificial communication systems that follow linguistic principles as phonological assimilations or some logical associations in etymology. Although, it does not mean he discourages potential “surreal conlangers”, as he proposedly called them, even the opposite.


The book is divided into four chapters and each of them consists of subchapters that examine several issues and basic linguistic topics. The further the reader goes, the more complex the idea becomes. In Chapter I, Peterson felt obliged to present the primary subjects of linguistics - sounds, but also took it reasonably further.
”Humans can do some pretty amazing things with their mouths, hands, and bodies, but everything we can possibly do is still quite human. What if there was a being that didn’t have our unique physiology? How might they communicate?” (Sounds: Alien Sound Systems)
Instead of limitting the phonology to human speech, he made an attempt to restrain potential conlangers from an anthropocentric concept of phonetics and phonology which exemplifies his care for developping reader’s imagination.
“(...) we’re able to understand and work with our five senses, so an alien language would probably need to make use of at least one of those senses, unless you’re able to think up a distinct type of sense (thought doesn’t count). In order to determine what makes sense, you’ll first have to come up with an alien” (Sounds: Alien Sound Systems)
Peterson does not seem to quit here at this point since the further chapters follow the same concept. Chapter II is about morphology. In there, he provides a sizeable number of examples either from his own created languages (including Shiväisith, Irathient and others that are listed in the Phrase Books section) or natural languages that often seem bizarre to English native speakers, as Hindi that uses a completely different noun vs. object strategy in the past tense (p.131, 132, 133). The third chapter focuses on evolution which is regarded as the most important by Peterson. The final chapter discusses script and very unfamiliar to the Europeans types of writing systems.
Instead of exemplifying linguistic data for conlangers to memorise, Peterson showed them in a speculative perspective:
“How do you pronounce la§a? Pretty much like lava, except instead of putting a v sound in between the a vowels, you clap your hands together once. So l-a-CLAP!-a. No natural language on Earth does this, except in songs or language games (remember that dog Bingo?). There’s no reason why a language couldn’t do this (it’d be fairly simple to incorporate it into a language. Try replacing the sound f with a clap in English.”
Additionaly, it s not only the art of the language invention itself that makes the book captivating and comprehensible but also the casual humour and fairly informal style gives the original shape to the whole text. This gives the effect of the bond between the author and the reader whose interest met with Peterson’s aim. The excerpt below is another illustration in what way Peterson humourises a compendium:
Wherever you are (especially if you’re in a library, bookstore, or at work), open your mouth and scream. Loud.
SCREAM!!!
That’s a vowel.
A vowel sound is produced when air is allowed to pass out of the lungs totally unimpeded.
And the audiobook is not an exception. In spite of the graphs, difficult terms and the amazing ideas, it is also a comprehensive and constructed in a non-standard way source. Nevertheless, he does not flout the importance of the careful steps of the evolutionary process of the language. The difficulty of it might disappoint beginners in this activity. Obviously, once the terms are defined, it is assumed that the reader memorises them in order to understand the ideas put further. This is why the book appears “clubby” at times.
However, several things were not developed as diligently as others and they seemed to have been written in a rush. For example, in the explanation of the verb moods or tenses, the information appeared to be quite concise and it did not feel as accessible as the topics given in the Chapter II.
The work has been helpful for many language specialists and amateur linguists — David J. Peterson felt obliged to transfer the ideas given on paper to the videos on YouTube after the book met people’s expectations. However, the book is significantly more cohesive with the contents included. It is best to examine the book on your own rather than reading the review. The author deserves his recognition as the language creator of the modern age, even though this is just the beginning.

A great book for language lovers.

I really enjoyed this book. I am not interested in making my own language, but am a fan a learning all about languages and how they work. This book is great for language lovers and a must if you are interested in making one of your own. The book has a little of everything that is language related.

The book is read by the author himself so it adds to the great quality of the book.

YES!! It's funny, sarcastic AND informative. A subject that could be super dry and boring to those who are not conlangs is made fun, intriguing, and fascinating.

You'd need to get both the audio book AND the printed on (for visual folks) as there are visual clues that are important.

n/a It's an educational/informational book.

What does David J. Peterson bring to the story that you wouldn’t experience if you just read the book?

A human voice that is warm, friendly and funny.

That languages have specific patterns to them, like songs. Where an accent or emphasis is on words in general is specific to the language itself. So , if you were knowledgeable enough, you could tell a conlang's native language OR know what irl language they based theirs on.

That and I learned what a conlang is as well!

If you are a writer that need to develop a language, read it. It's so worth it.

As a non con-linger, this was an awesome read. I feel like this book struck the right balance of being a how-to manual for con-lingers, and general linguistics insight book.

The History of Conlangs & Creating Languages

What made the experience of listening to The Art of Language Invention the most enjoyable?

The author is so knowledgable, and it was amazing to listen to a history and overview of something I wasn't familiar with but was very curious about.

What was one of the most memorable moments of The Art of Language Invention?

What about David J. Peterson’s performance did you like?

The narration seemed so patient, going through every sound with practiced ease. As an ardent geek, there were also plenty of pop culture references in here that I really enjoyed.

When David J. Peterson was talking about how he felt when he saw one of the languages that he created recreated on the set of the SyFy show Defiance, it was clear that he put so much time and thought into his work.

This book made me feel so fascinated with the world of consigning. Even though I will probably never create one myself, I love this book!