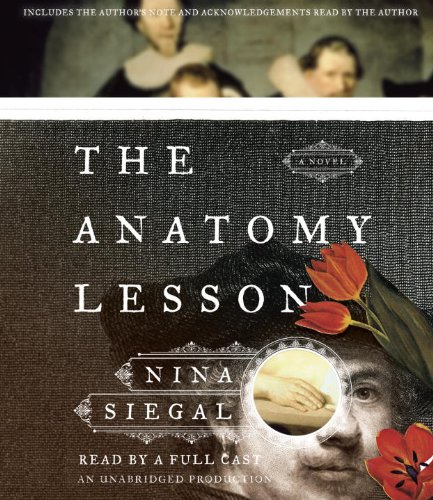 "Once in a rare while, you get to read a story of such breathtaking beauty and intelligence that you remember why you love to read. The Anatomy Lesson is just such a novel. In stunning prose, Nina Siegal animates Rembrandt’s first masterpiece, spinning a deeply affecting tale of love, loss and redemption as she reveals the secrets of the human soul. It is a gorgeous literary page turner of immense sympathy and elegance, equal in artistic élan to its inspiration. Brava!" —Robin Oliveira, author of My Name is Mary Sutter and I Always Loved You

"Rembrandt's The Anatomy Lesson of Dr. Nicolaes Tulp  is a narrative in paint which tells a story of Amsterdam in its Golden Age. Now, Nina Siegal's lovely novel dissects the dissection, evocatively translating the painted narrative into words, bringing a grim tableau to life and reanimating a moment in history when art, science, life, and death converged." — Russell Shorto, author of Amsterdam: A History of the World's Most Liberal City

"Brilliantly structured, wonderfully evocative, filled with vivid characters, The Anatomy Lesson transports the reader to that day in 1632 when the coat thief Aris Kindt passed from life to death and from death, thanks first to Rembrandt and now Nina Siegal, into immortality. A dazzling debut." —Margot Livesey, author of The Flight of Gemma Hardy

Commissioned by the Amsterdam Surgeons’ Guild, The Anatomy Lesson of Dr. Nicolaes Tulp was the first major Rembrandt work to catapult the young painter to international fame. Taking this painting as its inspiration, Nina Siegal’s novel The Anatomy Lesson opens on the morning of the medical dissection and follows several characters as they prepare for the evening’s big event: we meet Aris the Kid, a one-handed coat thief who is awaiting his turn at the gallows; Flora, the woman who is pregnant with his child and who hopes to save him from the executioner; Jan Fetchet, a curio collector who also moonlights as an acquirer of medical cadavers; René Descartes, who will attend the dissection in the course of his quest to understand where the human soul resides; and the twenty-six-year-old Dutch master himself, who feels a shade uneasy about this assignment. And in the twenty-first century, there is Pia, a contemporary art historian who is examining the painting.

As the story builds to its dramatic and inevitable conclusion, the events that transpire throughout the day sway Rembrandt to make fundamental changes to his initial composition. Bringing to life the vivid world of Amsterdam in 1632, The Anatomy Lesson offers a rich slice of history and a textured story by a young master.

I cringed at the narration -- intolerable

I couldn't listen to this book for long. Bruce Mann's voice makes me cringe. I couldn't tolerate listening to this anymore. I'll get the book in print.

I will never get a book narrated by Bruce Mann again.

Just an awful read by Bruce Mann. I've listen to many, many books and have never, EVER not been able to finish it because of the reader. As another reviewer said…I'll get the book!

Nina Siegal has taken one masterpiece painting, "The Anatomy Lesson of Dr. Nicolaes Tulp" by the young 26 year old Rembrandt, and historically and imaginatively brought it to life. And though it states above that she is the narrator, I believe it was done by several other people whose names I don't see listed there.

Siegal has reflected upon this one painting (which it helps the listener to look at in an art book or via googling) and given it a credible story. She has brought to life even the corpse, so the reader/listener can have a greater sense of who the real people posing there might have been. It was well researched and provides insights into the life, mindset, religious views, ideas, artistic approaches, and even superstitions of the 17th century Dutch world.

There is one character, Pia the art restorer, who "dissects" the picture via dictation, as she prepares to clean it, thus giving the listener the opportunity to hear about every detail in it. This is especially interesting as it parallels the way the Rembrandt character goes about creating it in his own mind before beginning to paint it. The painting depicts an autopsy, and she focuses on how the corpse's right hand appears to look as though it has been altered at some point by Rembrandt, which she also cleverly works into the story itself.

I found the characters fascinating, because she excellently provided historical perspective through them. There were Rembrandt and Dr. Tulp, the anatomist, and how they came together for this painting, but also Adrian, the hanged criminal (corpse) and his wife Flora. Rene Descartes was prominently a part, as he searched for the seat of the soul and mind in the body. At that time, they apparently believed the body would reveal the misdeeds of a man's life. Dr. Tulp says that "to know the body is to know God's purpose." One particularly moving point the author weaves in, is the observation that the corpse looks particularly Christlike, itself a frequent topic in art history. She mentions especially another well-known painting, "Lamentations of Christ," comparing the perspective and the emotions aroused in the viewer.

I believe that Siegal has done a good job of bringing not only the characters, but the historical times alive. She has provided a combination of back story to explain how the people arrived where they were in the painting, an exploration of artistic social value, guilds and techniques, philosophical and theological ideas and common mindsets and beliefs that would have guided their daily lives. I think she handles the dissection as carefully for the listener as possible. I did not find it at all upsetting, but I suppose the overall premise of the book could be uncomfortable for some listeners.

I would hope that she will take more paintings and do this sort of imaginative/historical exploration more in future. I love art and art history, often find myself wondering what the story inspiring many old paintings might have been, and so I very much welcome her contribution. I think she gave a good balance to what is known combined with her creation of characters' thoughts and intentions. The narration was wonderful, almost all voices being clearly distinguishable as the particular character at all times. I think the book begins a tad slowly, but looking back, perhaps it had to, to be able to draw the listener in with enough details to understand the whole effort. This is a book that I could listen to again (which I rarely do).

A Brilliant Exploration of a City and an Era

This novel envelopes the reader in Amsterdam when its culture was at its height, by revealing typical characters drawn together by the annual anatomy lesson as painted by Rembrandt. The reader is particularly drawn to the young man being dissected, his pregnant girlfriend, and various characters involved with this annual lesson. Through the painting of the lesson, the reader sees the highs and lows of a city at its zenith.

Enjoyed the story more than I thought I would and would like to see this painting in person.