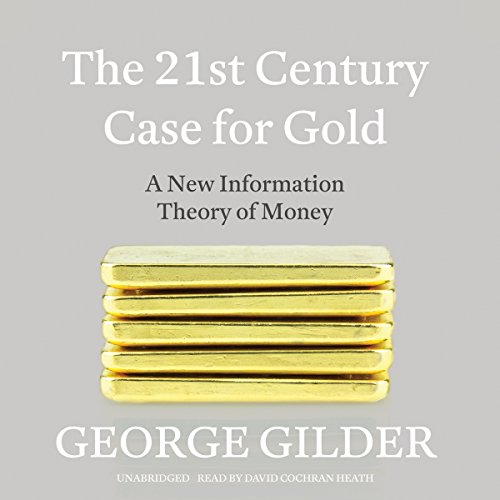 This new book by New York Times best-selling author George Gilder tackles key questions about how monetarism distorts the economy and leads to misallocation of investment. Gilder covers a variety of topics, including Milton Friedman's greatest "error", money supply and velocity, the perils of high-volume trading, Bitcoin and how it mimics gold, and why a gold standard is superior to targeting based on a basket of commodities.

The 21st Century Case for Goldに寄せられたリスナーの声

As a mainstream economist, I sometimes scour the heterodox economics literature for insights. By heterodox, I include a wide range of esoteric economic thought on the edges of the ideological spectrum: Austrian economics, ecological economics, modern monetary theory, and gold-buggery. My expectation of finding undiscovered nuggets of wisdom is low, not because these authors’ out-of-the-echo-chamber thinking doesn’t often have value, but because mainstream economists are rewarded for incorporating the valuable insights from heterodox economics into their models. So when reading a book like this, I see myself as panning for gold in a river already picked dry.

While I don’t know if this book has any useful insights, I didn’t get anything out of it because of its bizarre writing style. I appreciate a well thought out analogy to illustrate an economic idea. But this book is chock full of analogies to scientific phenomena that felt random to me - as if the author was hiding sloppy thought behind sophisticated sounding terminology from the hard sciences. I was familiar with some of the science, and in those cases the analogies didn’t provide any clarification. Where I wasn’t familiar with the science, the book sounded like gobbledygook. Let me be clear, the book contains no hard science: just economics ideas explained by analogy to hard science. So while it's possible the author has brilliant insights that I missed because I don’t know the science behind his analogies, I’m doubtful. In any case, much of the book will be incomprehensible to any reader who lacks a broad and deep understanding of a dozen random scientific fields.

The author sets up the book as an attempt to prove wrong Milton Friedman’s Nobel Prize winning insights. When trying to contradict one of the most brilliant economists in history in just over 2 hours, I would expect the author to stay focused. But instead the author gets distracted by a number of interesting rabbit holes. For example, he discusses a proposed crypto currency that would maintain wallet purchasing power by making units of currency disappear and reappear in people’s crypto “wallets” according to an index of commodity prices. While an interesting thought experiment, gold obviously doesn’t behave this way, and I don't understand how this relates to his case for a gold standard. He also went on a tangent about how laws against insider trading reduce the amount of information in the stock market. I would be interested in evidence that this has negative implications for the real world, but I saw no connection to the gold standard, and like much of the book, the author relies on rhetorical argument, not evidence.

So after reading the book, I am left with the same questions about “the 21st century case for gold” that I had before I started reading. Mainstream economics blames the gold standard for the extreme boom bust cycles of the 19th century, and deflation that led to the free silver movement of William Jennings Bryant (and analogized in the book “The Wizard of Oz”). Would a new gold standard lead to the same problems? The case for fiat currency is simple: the Fed now has a long track record of avoiding deflation while keeping inflation around 2%. Economic growth rates have been respectable, and while the 2008 recession was perhaps mismanaged, it’s not clear how a gold standard would have addressed the issues that caused the recession, or improved the recovery. The bottom line is that the Fed has achieved better price stability than past gold standards. Any case for gold has to address this reality.

George Gilder changes his estimate of bitcoin in his latest book "Life After Google" (2018). He now sees flaws in bitcoin's design based on the mismatch of savers and long-term investors. A successful currency/money needs to take investment needs into account.
I'm thinking if the key is time... that a distributed clock is the key. A uniform percentage is released and doesn't stop at a fixed amount. Then there needs to be a function that allows the currency to be used in funding an investment and in loans. The ability for debt forgiveness/destruction needs to be built in too as a part of investment risk.
Investment returns are the other side of the investment equation.
Bitcoin is ok as a payment system but it isn't set to to function as a global currency. The distribution system was never a great design. My thought is there should be a fixed exchange rate for each fiat currency and then the fiat currency should be destroyed as it's "quantum teleported" into the system thus swapping/replacing fiat for non-state sponsored. without the corresponding destruction of the fiat the combined money supply expands.

I am looking forward to a rebuttal to mainstream monetarist economics. I tried to stay open-minded, because I'm well aware that quantity theory of money has its flaws. I really wanna hear the author out because there must be some great uncommon insights for someone to advocate gold standard in the 21st century.

While it opens with a true (albeit cliched) criticism of the contemporary capitalistic system dominated by financial institutions, the main arguments are presented sloppily and not quite convincing.

First the author asserts wealth = knowledge and growth = learning. Then, money should be a medium for information transmission so to minimize noises it should have entropies as low as possible. What's more stable than the constant flow of time? Hence gold should be money because it's stable through time hence it represents time.

Okay the flow of logic is there, but it takes a lot for a reader to accept any of the above statements. I can see his argument but it's just not convincing. Were there no financial crisis back when countries were still using gold standard? Were entrepreneurs more innovative when money was pegged to gold? Would inflation targeting solve the entropy problem? How does Bitcoin come into play? Shouldn't Bitcoin not gold be money? I seriously don't know! Those are not rhetorical but genuine questions to be answered if a reader like me to accept a unorthodox theory.

To me, this book is overly meandering in the theoretical framework which is based on information theory, remotely at best. The concepts, like outlined above, are outlandish to most. I would expect real life examples, data, experiments, or at least historical events to support his theory. Otherwise, a theory as out there like this, I'm not buying it, and I doubt most will.

There is neither information theory nor a case for gold, or any other monetary basis, in this work. Sounds like a highschool student wrote down a bunch of things they read on their guided social media platform. The work lacks the effort that embodies value (so I guess maybe that's the point of the book?) It could be that this book is intended to be one of those recursive appreciation things where the statement is the observers realization that they are thinking about the observation. All the same, it isn't good and should be placed in fiction.

I liked the straightforward line of reasoning in this book. I believe much more must be written to show the importance of sound money and gold/BTC standard!
After listening to this book, I bought two other titles from the same author. He’s really great.

Enjoyable and thought provoking, George Gilder’s brief read on monetary theory applies the “Theory of Information” he explored in “Power and Knowledge” (2013) and integrates it into what he defines as a new paradigm for money.

He explores the brilliance and errors of monetary greats Friedman and Hayak and explains where these theories hit their limitations. In the case of Friedman, he delves into the practical realities of money velocity and why it returns power and freedom back to the market from the manipulations of central bankers (creation of money).

Gilder argues convincingly that the disruption and entropy of new information and unpredictable discoveries are what drive the value of money while indicting the arrogance of central planners and governments’ monetary manipulations who are fighting a losing battle against the time and information value of money.

Ultimately, Gilder views the constancy of gold, its creation and predictable rate of growth, as a store of value which will reassert itself in coming years.

If interested in learning more, I highly recommend the writings of Jim Richards, particularly “The New Case for Gold” (2016).

The performance fits the material.