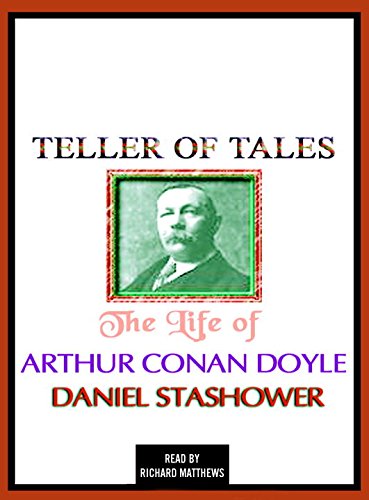 "[An] excellent biography of the man who created Sherlock Holmes - and who would like to have been remembered for a great deal more. "(The New York Times Book)
"A gripping sympathetic bio that proves that Doyle was anything but elementary." (Entertainment Weekly)
"An appealing and much-needed biography of the man who created one of literature's renowned eccentrics." (The Wall Street Journal)

This compelling biography examines the extraordinary life and strange contrasts of Sir Arthur Conan Doyle, the struggling provincial doctor who became the most popular storyteller of his age when he created Sherlock Holmes. From his youthful exploits aboard a whaling ship to his often stormy friendships with such figures as Harry Houdini and George Bernard Shaw, Conan Doyle lived a life as gripping as any of his adventures.

Exhaustively researched and elegantly written, Teller of Tales sets aside many myths and misconceptions to present a vivid portrait of the man behind the legend of Baker Street, with a particular emphasis on the Psychic Crusade that dominated his final years, the work that Conan Doyle himself felt to be "the most important thing in the world".

While I knew the rough facts about Doyle's life, I found a great many new bits of information in this biography, and came away with a greater appreciation of Doyle's body of work - though still very puzzled about his inability to be objective about the spiritualism movement. The book is full of wonderful anecdotes, and describes many of Doyle's less-well-known works in ways that made me want to dash out and read them. Narrator Robert Whitfield (aka Simon Vance) does a marvelous job here. Recommended.

Read superbly (as usual) by “Richard Matthews” (aka Simon Vance), this biography of Arthur Conan Doyle is a treat. The lucid narrative is peppered with fascinating details about Conan Doyle’s life and insights into his writing. It spurred me on to branch out from Sherlock Holmes and Professor Challenger and read Conan Doyle’s other work, especially The White Company and the Brigadier Gerard stories. I was surprised to learn that late in life he'd written a science fiction novel about Atlantis that was compared to the work of Jules Verne; so I've added that to my list as well.

His involvement in real-life detective work is well known, although the disappointing outcome of some of his investigations was a surprise to me. More than once he turned up irrefutable evidence of the innocence of the accused, only to find the bureaucracy of British justice unwilling to accept the idea that a conviction was unsound. One of the cases he championed ended with a conviction being overturned on a technicality, but no pardon; the man in question had meanwhile spent 18 years in prison.

He wrote and campaigned vigorously against the horrors of the Belgian Congo — a cause that also drew the support of Mark Twain — only to come under attack himself for the frankness of his descriptions of torture and maiming.

He championed the cause of Roger Casement, the Irish patriot, whose letters from Peru gave him vital background details for the setting of The Lost World. When Casement was sentenced to be hanged for treason — he had (in the middle of the Great War) conspired with the German government to procure arms for an Irish rebellion — Conan Doyle circulated a petition for clemency, insisting that Casement was insane. He refused to withdraw it when the Crown revealed the existence of Casement’s diaries, filled with accounts of his double life as a gay man. Not exactly a stirring endorsement of gay rights; but in his continuing support of Casement despite this “scandal,” Conan Doyle was a lone warrior. Sadly, he failed, and Casement was hanged.

The major dilemma in a biography of Conan Doyle is laying down the Holmes stories side by side with his devotion to seances and other forms of crackpot spiritualism. How could both come from the same person? Yet Stashower succeeds in a remarkable balancing act. He shows an attitude of hard-headed skepticism when it comes to spiritualist doctrine; but he also shows a deep sympathy for the “need to believe” that led Conan Doyle down this primrose path to public ridicule. His devotion cost Conan Doyle both financially and in personal terms. He tried to involve himself in the disappearance of Agatha Christie, consulting a medium for clues. His last novel about Professor Challenger was a preachy tale that ended with Challenger becoming a convert to spiritualism. He became increasingly concerned as spiritualists the world over began raising alarms in the late 1920s about a global ecological catastrophe that would end civilization.

There were costs and embarrassments on a more modest scale. He enjoyed a friendship with the American escape artist Harry Houdini, but their relationship foundered on the rocks of spiritualism. Even after Houdini exposed the trickery behind many spiritualist demonstrations, Conan Doyle remained a staunch believer; he came to suspect Houdini himself possessed psychic powers, including the ability to convert himself into ectoplasm and back again. Houdini, he said, refused to acknowledge this as a matter of professional pride. Their friendship ended in public recriminations.

Stashower’s book is a good literary biography, with generally positive but well-grounded assessments of Conan Doyle’s work in fiction and history. There was, sadly, a falling off of his literary abilities as he aged and as he devoted himself more and more to proselytizing for spiritualism. He was an indefatigable lecturer and, like Charles Dickens, pushed himself beyond endurance on the platform. He died of a heart attack in 1930, sitting quietly in a chair at home. His last words were to his wife: “You are wonderful.”

So is the book, and so is the audiobook.

I would recommend this to anyone interested in Conan Doyle, his work, or the history of the turn of the previous century. Well written and sympathetic. A case could be made that it is a little too sympathetic, but if it was not so Conan Doyle could easily be portrayed as a nut case. As it is, the latter portion of his life is more comfortable to listen to. His wit is well displayed which also makes for a good read.

Richard Matthews as usual does a stellar job. It is, however, a little un-nerving to hear Felix Leiter (the American CIA agent in Casino Royal) as the voice of the American newspapers. Perhaps he borrowed the voice from Simon Vance or Robert Whitfield.

A well-presented audio-biography showing Conan Doyle's pioneering history as writer. This should be of interest to a wide variety of readers/listeners and would-be authors - esp.those in the field of specific, clear observation in detection.