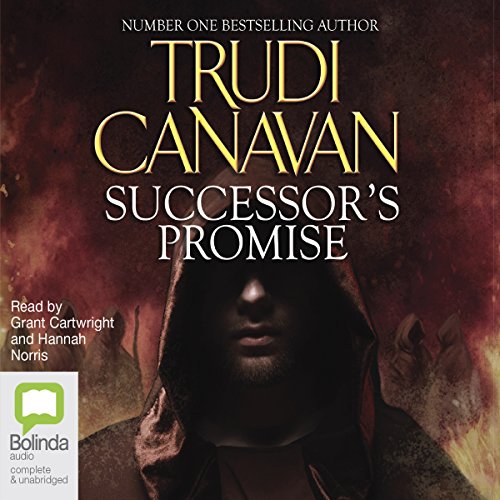 Five years have passed since the Rebels confronted the Raen. Five years in which the boy Rielle rescued, Qall, has grown up among the Travellers, with no memory of the life that was stolen from him. Five years of chaos barely contained by Baluka and the Restorers. Worlds are at war, some overrun by deadly machines, some drained of magic by power-hungry sorcerers.

As Qall comes of age, and Rielle and Tyen's hard-won peace is threatened, their loyalties are tested - and Qall's very existence is at stake. Because Dahli is still determined to restore Valhan to power, and he will stop at nothing to succeed.

Escape to a new world. Discover the magic of Trudi Canavan.

Great continuation of the story

Though we wanted a long time for the release of this book it was well worth the wait.
It further expands the cultural and vibrant universe that we have come to know in the first two Books, as well as develop the characters we love.
(Even if you just want to slap a certain spy for constant lies)
Can not wait for book 4

Thus is such a well written and thought out story, a must-read! Definitely check it out!

Why did book four disappear from audible

I enjoyed this series. A little to much mind reading. Focus on one life when worlds disappear.

Only started series again because book four showed up as new release. Listen to books again book Four not available .

Good Character Development and plot twists! pacing is good and the narrator is great. switches well between characters!

I have read all of Trudi Canavan’s books and have really enjoyed The Millenium’s Rule books so far. They are a nice blend of fun fantasy fiction and moral lessons. This third book was no exception.

The only complaint I have is that the two readers pronounce the names of characters differently, making it quite difficult to fixture out exactly which characters they are referencing at certain times throughout the reading. It’s really confusing. You would think they would at least figure out the same pronunciation of names before reading the books!

It was great to be back in this world, with the continuation of this story. But annoyingly, the two narrators pronounced major characters’ names differently. Also, the story seemed hurried in some spots, and unnecessarily complicated in others. Overall, I am glad I listened.

loved it. I enjoyed the main characters. I had a difficult time liking the character Quall. His character becomes so much more interesting though. good read. I like the series very much.

This series just gets better and better for every book. If you liked the previous two, you are gonna love this one.
Sadly, the narrators pronounce names differently which takes you out of the story since Tyen and Rielle both meet the same characters and each other.

This "trilogy" has been a masterpiece. Definitely my favorite book series. I never want the intrigue and a venture to end!

Had me from the first word to the last...cannot wait for the next one but I guess I will just have to...

I’d give the performances higher stars if they’re co-ordinated the pronunciation of characters names. There was one main character name that was said completely differently by each narrator , very frustrating. However as a Trudi fan I love these books and have enjoyed now listening to the audio versions of them.

I really loved this.
only thing i disliked was that the two narrators disagreed with how to pronounce Qal. wi one saying qual, and the other coll. annoyed me slightly

Sadly this series is just not living up to earlier works.
it seems like a very good idea that is taking forever to get anywhere. The characters would best be described as constantly anxious and always second guessing, what if this, how about that.
Most annoyingly though is both readers pronouncing names differently. Not having read the book I don't know the spelling but the lady is pronouncing it qual/kwal and the guy is saying caul/call for the same character. how has this been overlooked??

Another enthralling read from Trudi Canavan

Thanks for writing another spellbinding book. Thoroughly enjoyed it, can't wait to read Maker's Curse.

Really enjoyed book 3 of 4. However, the inconsistencies in narration were annoying. The male and female authors had different ideas on pronunciation of names and accents so it would have flowed better if that had been identified and rectified. Other than that an enjoyable story into many other worlds with likeable characters. Looking forward to book 4 now it is out.

epic story, roll on the next book

I enjoyed listening to the whole trilogy on a whole, though can't really call it a trilogy as I heard a fourth is now under way, however this third story ties up the storyline so far & could be considered a fair conclusion if you weren't to listen or read the fourth. enjoyed the character arcs & the use of minor character stories that popped up to help create a world vision. great fantasy stuff!

This series has really become a strong favourite of mine after some initial worries about it at the start of book one. The characters are varied and well developed. The reading from both is great and never jolts me out of the story.

A really interesting story which intricately explores deep questions of power, ethics, and mortality with remarkable skill. The only drawback is that it sometimes feels a little too cerebral, and the emotional impact we should feel is lost in the philosophical pondering.
Also, while the narrators are both perfectly competent, I do wish readers of the same book would have a discussion about the reading of fantasy names before recording...

I have read the previous 2 books in this series and all Trudi Canavan's previous books. it was quite different to listen to the audio book version of this book. I liked the way the 2 narrator's had different takes on what the characters sounded like and how certain words were pronounced.
The book itself was excellent and made my drive to and from work for the last 18 hours almost enjoyable (if sitting traffic could be enjoyable!)

Lives up to the wait.

Once again we join Tyen and Rielle as they try to find their way through the worlds no longer ruled by the Raen.

Qall is hidden by Rielle for his safety. The rebels try to maintain order as the Raen's allies try to ressurrect the Raen.

We meet them 5 years later and Tyen is a maker of kilns, Rielle an artist of tiles. The fragile peace on the worlds they are living in is broken by war and both end up fleeing as war starts. It is symbolic of the condition of the world's which the Raen ruled and kept in check.

Rielle takes responsibility for Qall's safety as he is now a young man and flees into hiding believing that Tyen (who is now her lover) has joined Dalee in trying to ressurrect the Raen. She fears they will try to use Qall.

The beauty of the narrative is that the past and present is woven in, so new and followers of 'Millennium's Rule' can follow and pick up the story.

The use of the dual narrative voices keeps us engaged and we get to see a much wider view of the issues as a result.

There's too much to convey of the story in this review so you will just have to read/listen and enjoy. As always Trudi Canavan does not disappoint in creating vivid and intricate world's.

The book is fantastic and the reader spot on.
He definitely keeps you entertained that I would highly recommend listening too

it was a good story but just felt like a rush to deal with issues from the last book.

but my biggest issue is having the same character voiced by two very different people. This made it feel quite disjointed.

if you lile the series then clearly your going to listen to this and it is a good addition.. just a bit of an anticlimactic one.

Fantastic story. I thought this was the final book but now I'm eagerly awaiting the next. My only critique is that the voice actors use really dofferent accents to pprtray the same characters. I wish they had worked together to standardise that a little better.