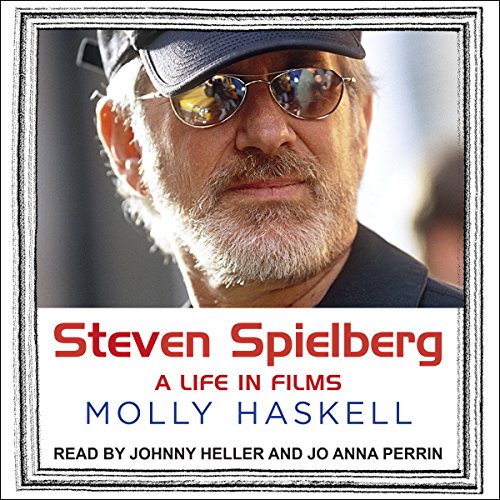 "This is a wonderful book, at once personal and critical, eloquent and vivacious." (Morris Dickstein, author of Dancing in the Dark)

"Everything about me is in my films," Steven Spielberg has said. Taking this as a key to understanding the hugely successful moviemaker, Molly Haskell explores the full range of Spielberg's works for the light they shine upon the man himself. Through such powerhouse hits as Close Encounters of the Third Kind, E.T., Jurassic Park, and Indiana Jones, to less-appreciated movies like Empire of the Sun, to the haunting Schindler's List, Haskell shows how Spielberg's uniquely evocative filmmaking and story-telling reveal the many ways in which his life, work, and times are entwined.

Organizing chapters around specific films, the distinguished critic discusses how Spielberg's childhood in non-Jewish suburbs, his parents' traumatic divorce, his return to Judaism upon his son's birth, and other events echo in his work. She offers a brilliant portrait of the extraordinary director-a small, unhappy boy living through his imagination who grew into a man whose openness, generosity of spirit, and creativity have enchanted audiences for more than 40 years.

If you have an interest in Spielberg there are some gems to be gleaned. The writing style is a bit stilted which might make the audio an acquired taste. The book is narrated by Johnny Heller, who does a great job of making the text accessible. Noticed another review here mentioning a problem with "her" on the audio ??? There is a few minute intro by narrator Perrin which is Ms. Haskell's intro, which is fine, although again, the text is not fluid, but the entire book is read only by Heller. Again, I think it's an acquired taste.

This verbose author writes about a director she clearly resents. She's so in love with her own voice as she makes wild & condescending assumptions about a man she has never met.
The vocal performance is good!

Narrator is great. A lot of book is psychoanalysis

The best thing about the book is narrator Johnny Heller. His voice is reminiscent of Hector Elizondo and great to listen to.

As for the book's content: From the early years of Spielberg's grandparents, parents, and Spielberg himself, a lot of the book is an attempt at psychoanalysis of Spielberg's work and how his childhood has repeatedly put characters that are missing fathers and other factors.

Having a Bachelors in Psychology, I felt this approach was very heavy, droll, and while maybe a bit of interest, overall too pervasive. I would rather have learned actual stories about the making of his films, how he chooses his projects, etc than an attempt to frame his work from a "his childhood caused this to be a plot point" approach.

All in all, not a very enjoyable book.


Would you be willing to try another book from Molly Haskell? Why or why not?

If all of her books are written from a psychoanalytic standpoint, probably not. I like biographies and memoirs that educate me about stories from the making of the film.

Evaluating how someone's father leaving at an early age created a repetitive theme of fatherless children in a director's films may be educational to a point, but it should be at most a 15 minute evaluation where the films that have that theme are discussed. Not hours.

Basically, his father leaving, being Jewish, and the Holocaust have shaped everything in this book. If that sounds simplistic, it may be a reaction to the book being repetitive to the point of trying to beat the message into you.

Discussions regarding his rise, his setting up of everything from films to his offices, actual things that happened rather than opinions.

Did Steven Spielberg inspire you to do anything?

Keep an eye out for books narrated by Johnny Heller!!!

I believe the book was written either as a thesis/school project (hence the heavy analysis) or by someone who has a background in Psychology and wanted to apply their education/views on to Spielberg's work. For that purpose, this book would be great.

But beyond watching E.T., Schindler's List, etc and holding them up against Spielberg's life history for analysis, the book lacks a lot of inside anecdotes regarding the actual making of Spielberg's films that one typically finds when reading a biography of a person's work that goes year by year, film by film.

Her voice is like a robots voice. I can go on listen to it! Bummer

Her voice is like a robots voice. I can go on listen to it! Bummer

excellent although the biographer is to Freudian

a wonderful telling of the life of a man who is far more interesting than i imagined. i was mildly interested but it turned out I could not stop listening and listened to it all in one day!

What was one of the most memorable moments of Steven Spielberg?

highlighting how Spielberg's work is, as he says, that of a ten year old, all be it a very uncompromising ten year old who chases his vision

What does Johnny Heller and Jo Anna Perrin bring to the story that you wouldn’t experience if you had only read the book?

time! i wouldn't read this as i have too many other books to read but to listen to it whilst cleaning etc means i get the best of both worlds. the reading isn't great but it is enjoyable enough and i learnt things i would never have learnt before.

i was moved to frustration by the author saying that they were freudian and then trying to over sexualise his work, work which they say is made by a perpetual ten year old and later say has virtually no sex in it. this is a case, i think, of the biographer projecting upon the work, even through they know it is not there. the sexualisation of moments in ET (it's all about keys) was particularly weird. other than that i think it catches, quite well, the sentimentally of Spielberg which is the key, i think, to his work

i didn't think i would like it that much or care that much (i got it to add to the 'if i have time' pile), turns out i cared a lot and really liked it!