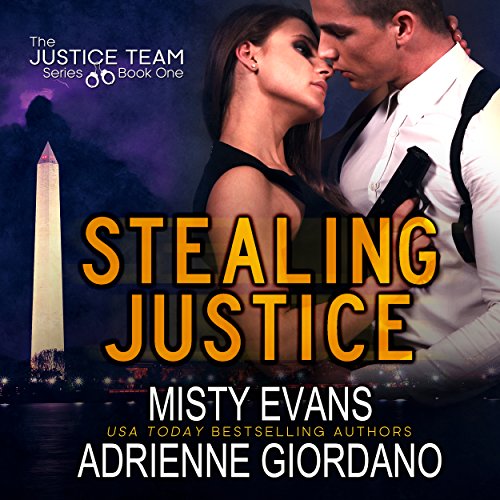 The first book in a thrilling new romantic suspense series....

Justice "Grey" Greystone was fired from the FBI for insubordination. Now the FBI wants him to use his renegade skills to take down a serial killer who's above the law. To trap the Lion, Grey will need to send the perfect woman undercover.

Sydney Banfield runs a women's shelter and bends the law daily to help victims of abuse escape their painful lives. Three of the women she's recruited for government jobs have become victims of the Lion. If Syd has her way, the vicious killer will never touch another woman again.

Grey and Sydney set a trap - with Sydney as the sexy bait - but the Lion adds a complex twist to his homicidal agenda. With Sydney's life on the line, Grey must race against the clock to catch a killer who's as unstoppable as he is evil.

Syd and Gray Are A Good Team

What did you love best about Stealing Justice?

I loved the way Sydney had her own identity and job. I liked how Gray knew to let her be herself. The story evolved and the affection grew slowly.

What was one of the most memorable moments of Stealing Justice?

I found the way Syd was able to get Ahmed tied up very well done. It continued to make him a suspicious character but it made you wonder if he really could be a murderer. I just liked the way the book moved from one detail to the next without giving the result away. When Syd and Gray are trying to fit the key into the safe was a bit Nervewracking.

I think the scene in the hospital when Gray surprises Syd with the peanut butter cupcakes. He really is a very sensitive guy.

Again, the way Gray seemed to know how to make Syd feel safe without diminishing her independent spirit.

I thought the narrator was perfect. He had the ability to let you know when the voice was coming over earbuds as well as changes between the characters.

You have got to be kidding!

The other reviewer said this, "I thought the narrator was perfect. He had the ability to let you know when the voice was coming over earbuds as well as changes between the characters." Really? You thought it was perfect that Syd and Grey sounded just alike? At 20% when Syd was talking all sexy to Grey it was like two men talking to each other. And that would be fine IF I was reading a gay love story. If a male narrator can't even pretend to sound a little feminine then he shouldn't a narrator. I'll finish the book by just reading it.

I would like to say that the description tells us what the book is about or we can zip over to Amazon and look at reviews. This is AUDIBLE! What we need to review is the narrator. Does he or she suck? Why? Is he or she too nasal-y, too sweet for the kind of book he or she is reading, to gruff, too bland, too robotic, lacks emotion. Is he or she doing nothing but reading the book? Not changing his or her voice for the male and female voices? Is the narrator sounding the same whether she or he is reading a whisper spoken?
Most of us on AUDIBLE don't really care what the book is about. We want to know about the narrator!