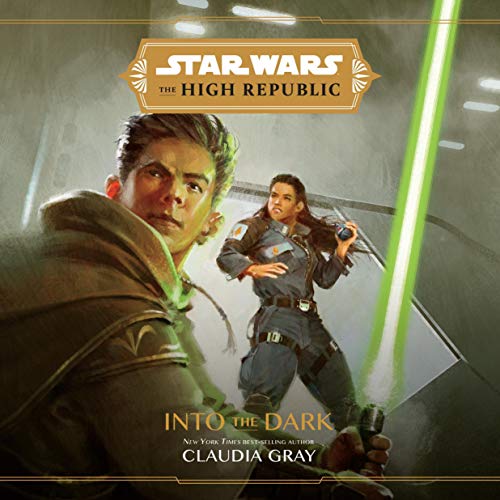 Star Wars: The High Republic: Into the Dark

Padawan Reath Silas is being sent from the cosmopolitan galactic capital of Coruscant to the undeveloped frontier - and he couldn't be less happy about it. He'd rather stay at the Jedi Temple, studying the archives. But when the ship he's traveling on is knocked out of hyperspace in a galactic-wide disaster, Reath finds himself at the center of the action. The Jedi and their traveling companions find refuge on what appears to be an abandoned space station. But then strange things start happening, leading the Jedi to investigate the truth behind the mysterious station, a truth that could end in tragedy....

Star Wars: The High Republic: Into the Darkに寄せられたリスナーの声

Brilliant performance and excellent music and sound accompaniments. Different narrator to light of the Jedi, but they do an equally fantastic job.

If you see Claudia Gray's name, buy it

As someone who has been a long time lover of Star Wars books, I was not impressed with the early output of the new canon after they made the old EU non-canon. But Claudia has knocked it out of the park every time and she keeps me invested in the star wars literary universe as a whole with every book she writes. Claudia knows how to write awesome and interesting characters and really hook you with the story. The performance by Dan Bittner is awesome too and kept me listening.

Love the book but THEY CHANGED THE "AUDIBLE HOPES YOU HAVE ENJOYED THIS PROGRAM" VOICE AT THE END AND IT THRU ME THRU A MASSIVE LOOP, it was quite distressing at the time.

High Republic has allot of potential

This book was much better than ‘Light of the Jed,’ the first intro into the High Republic era, in my opinion. Claudia Gray and Dan Bitter are fantastic as always.

not much of a story really. nothing remarkable about the book or characters. Definitely not worth the purchase.

Decent Star Wars Novel - Not Sure About the Tree People Though

The performance was good and the story is fairly well woven into the other High Republic book. But the whole evil-ent-conquerors vibe that comes out of nowhere in the final couple hours made me feel like I was listening to an odd crossover between Star Wars and Lord of the Rings. It felt entirely out of place seeing that the Nihil are supposed to be the main antagonists of the High Republic story arc and now the Gringer (evil ents) have been introduced as some sort of ancient conquering race that are closely connected with the dark-side and they might somehow become another major antagonist. That made the story feel disjointed, like I was listening to a book written in the Star Wars universe and then got transported to some weird crossover with Middle-Earth.

I was excited to get my hands on this tilte as I was a big star wars fan. I found myself struggling to fish the book. The narrator was excellent. Just the story line, and characters seem to be not very well thought out or executed. Would not recommend unless you want to hear about a ROCK that dose nothing the entire book while the other characters scrabble to try and make the book interesting. Failing miserably.

One of the best new canon books

I agree it's better than Light of the Jedi, especially in character development and the deeper questions it raises. Also, I like the primary protagonist, being a Jedi who actually reads and is interested in learning the same things about the galaxy and its history that Star Wars fans are interested in.
Also, personally I liked Bittner's narration. I think Marc Thompson is too cheesy and over-acting. This is similar in style but slightly dialed back.

One of the worst

Been a huge fan of canon and legend literature and surprisingly this is one of the worst. Very surprised since it was Claudia Grey writing. Story just dragged , not much excitement. And no works building !! Took place in one spot for 11 hours. Holy moly!! The other new Light of the Republic-novels were amazing.

Story is boring. Bad guys are lame. Voices seem out of place for some characters.

Slow burn but actually decent give it a go if you like the expanded universe, a new tail and the stories seem to be blending well

The "main story tie-in" of the High Republic

This feels like what the other canon novels are to the movies of the skywalker saga. A smaller scale story that occurs around the events of a movie (Light of the Jedi in this situation) and adds to the universe without contradicting the main story. It's really nice to be able to take in The High Republic era on a smalller scale and especially when the plot is engaging and all the characters are likeable.

The performance by Dan Bittner was a bit jarring at first, especially compared to Marc Tompsons excelent narration in other Star Wars audiobooks. Despite that Dan Bittner did a solid job and after a chapter or two I was immersed in the story and his narration.

Perfect follow up to Light of the Jedi for people who want to learn more about this new era of Star Wars.

Typical new Star Wars canon. Needs a roll call of characters like the old ‘legends’ and I fear it’s trying to go woke.

A fun ride, but overlong.

This audiobook did not need to be eleven hours long. it seems to be positioed as a side-story, or at most, an interquel, happening alongside "Light of the Jedi." Yet, at least six chapters are dedicated to a flashback story that seem to me, only to serve the purpose of expositing lore purely for the sake of having done so. I see no reason the flashback story couldn't have been its own short-story, and the plot to drag it's feet a little less.

Having said that, this was nevertheless a fun story with some enjoyable characters, and a few significant contributions to the overall narrative of the High Republic. Cheif among these would be the introduction of the Drengir. A species of carnivorous plant-beings that serve as a secondary, or perhaps parallel antagonist to the Nihil. As of this writing I don't know how their role in the story shakes out from here, but they are a fearsome addition to the Star Wars Universe, and enough to add tension to any situation.

It hardly seems noteworthy that the story is well-presented, all Star Wars audiobooks are in my admittedly still limited experience, Dan Bittner is not a name I recall seeing much of in these books so far (though I could be mistaken) but he certainly sounds as though he can narrate with the best of them.

As I mentioned above, the characters are enjoyable to be around, I particularly enjoyed Leox Gyasi, who is sufficiently cynical to ground the more naive sentiments of his crewmates but principled enough that it never becomes a source of tension. Also, maybe it's just me, but I found the jokes about Geode's exclusively-implied expressiveness to be funny and just frequent enough to not outstay their welcome.

The protagonist, Reath Silas is endearing too, though his personality tends to teter on the edge of monotonous for me at the worst of times, Though at the best of times the idea of an introverted bookworm jedi who just wants to live in the library felt eminently relatable.

Overall, I've definitely read worse books. I wouldn't say this is in any way required reading/listening, but nor would I say to avoid it if you don't mind some slow pacing with a few tangents here and there. I don't think you'd miss much context in future books if you skipped this one, but if you're a completionist, I don't think you'll regret listening to this at least once.

Since Bloodline and Lost Stars, Claudia is my continued favorite Star Wars author. Memorable characters with great arcs, for example Geode the silent big rock Navigator (solid guy! Genious idea in all its glorious stupidity) and the bookworm and reluctant Jedi adventurer Reath.
Some of the middle part of the story dragged with some confusing and (at first) uninteresting side plots, but in the end they all arrived at a great climax and were woven together masterfully, with some satisfying character developments and twists.

this book was really good. not just the book tho also the voice actor was fantastic in his preformance.

I was skeptical at first as I previously listened to Light of the Jedi, it was a good story however not particularly to my taste. which doesn't discredited how good it is. However I must say I really truly enjoyed into the Dark. The Drengir sound absolutely terrifying. I also think Reath Silas might be my favourite Jedi now. (That's coming from a self proclaimed Sith lord) I would definitely recommend this book. Great work!

Another great book by Claudia Gray

I found it a bit slow at first, but it was well worth the wait. Great narrator too - I began to wonder if there was more than one voice actor

Took a “little bit” to get started but really enjoyed it more and more, as the story progressed.

I found this great can't wait for the next instalment, kept me hanging just all out terrific!!

Voice acting.. spot on. Very well performed.
The story was okay... I mean it was a peaceful era of the Jedi so I'm not expecting alot of action but it's nice to see more diplomacy instead of lightsaber battle after lightsaber battle.
I like the new protagonist Reath, it's nice to see a non overpowered Jedi at the head of the story. He's just taking it as it comes and learning lots. I relate more to him then most of the overpowered Jedi.

Highly enjoyable to all Star Wars fans. Had to get used to Dan Bittner, but now he is the voice to these new characters.

Great storytelling, great writing, great performance, overall it was a lot of fun and I had a really good time. highly recommended.

Claudia Gray is clearly the champion of Star Wars books in the post EU/Legends era
Her stories are deep, emotional, thoughtful and adventurous - refreshing to have a Star Wars author who understands how to write sexual tension without it being cringeworthy and her characters are far more memorable and valued than any others introduced in the last few years

Into the dark is really showing the value and worthiness of this latest foray into a new time period, this title has really left me wanting more High Republic stories!

Slow start and a bit sceptical of Dan

it started off slow but got so much better. Dan isn't Marc but is a great narrator

I've loved every high republic story - its so bittersweet to know this will eventually lead into my least favorite part of the timeline...the prequel era. Almost makes my skin crawl saying it out loud