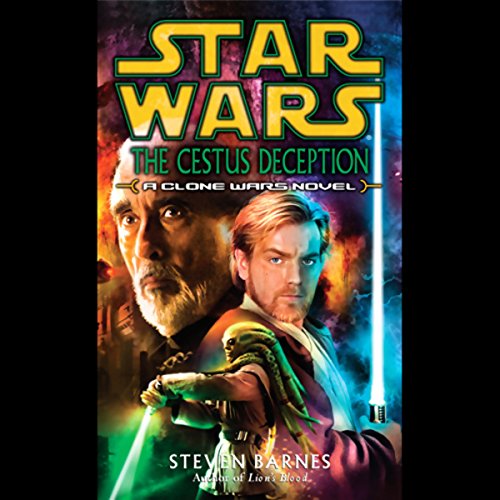 Ord Cestus, a planet mostly barren and inhospitable to life, was first colonized as a prison world, until a handful of hardy pioneers discovered its rich ore deposits and managed to build up a successful droid-manufacturing industry. But when the Clone Wars erupted, bringing severe rationing of imported resources and a Republic ban on the production of battle droids, Ord Cestus was threatened with imminent economic collapse.

Enter the Confederacy of Independent Systems - the Separatists - with a life-saving offer to purchase a generous quantity of the planet's most lucrative export: bio-droids. Possessed of tactical capabilities that rival the fighting abilities of even the most advanced Jedi, these sophisticated, techno-organic hybrid units would prove a most formidable weapon if ever deployed for military use.

Determined to halt the bio-droid sale, but fearing a show of force will result in a political backlash, Supreme Chancellor Palpatine dispatches a team of envoys, led by Jedi Master Obi-Wan Kenobi. But if all else fails, the Republic will not hesitate to launch a full-scale attack and wipe out not only the means of bio-droid production, but countless lives as well, to demonstrate the consequences of disloyalty.

For Obi-Wan, the prospect of such wholesale slaughter only serves to fuel his growing suspicions about the sinister path the Republic seems to be taking. As the leaders of Ord Cestus refuse to capitulate and Palpatine rapidly loses patience, Obi-Wan's hopes of a peaceful resolution are dwindling. Now, facing a crisis of conscience, Obi-Wan must find the wisdom and strength to prevent a bloodbath and safeguard the Republic while abiding by the ancient code to which he has pledged his life.

There is so much cutout with abridged this garbage

I think the story would have been fine, but it sounded like there was so much cut out and it was almost hard to follow. You never really got attached to the characters and didn't really learn a lot about them. Kit Fisto was a pretty amazing Jedi and this book only scratches the surface because of how much must be cut out.

What could Steven Barnes have done to make this a more enjoyable book for you?

Stop Abridging books. Give us the whole thing.

Would you listen to another book narrated by Jonathan Davis?

In general Davis has an enjoyable voice and is a decent narrator, however the Abridging is horrid. Also he pronounces Asajj Ventress incorrectly.

What character would you cut from Star Wars: The Cestus Deception: A Clone Wars Novel?

I would not cut characters, I would add back all the detail and back story that has been cut out.

Stop with the abridged novels already!

The story was to amended to follow it closely. I feel like I'm missing so much from it. I couldn't really get a feel for the characters without an adequate enough backstory. I feltthey concentrate on some other elements that really work important to the development of the story or the characters. In short I think it was just abridged way too much.p

Too short, left stuff out, bad pacing and all over the place hard covers better

Nice Performance - not too relevant too series

I liked the performance and it gives you some insight on Obi Wan and Anakin relationship further. But overall, it has little relevance to the series itself. Decent story, not enough action for me.

My son and I both listened to this. Well written - interesting story line, good character development, very descriptive. sound effects are good without being too much. great side story that happens before anyone realizes palpatine is on the dark side. really enjoyed it. narrator is superb - does obi wan to perfection!

Great performance by Jonathan Davis. I enjoy Steven Barnes writing style. I DID NOT like how horribly abridged it was. Skipping whole sections of details. Adding sentences that aren't written in. Skipping completed descriptions for important characters. I don't see how this is an appropriate way to entice readers and keep them interested. I've had to stop and read by myself multiple times along the same chapter(s); which I can't normally since I listen primarily when driving. I think this should be re-done unabridged, please.

The story is compelling and well written but it is too short for my usual standard. With it only covering 5 hours (including chapter changes, prologue, etc)

Story was good, but choppy in parts. Ending left a lot to be desired; too many parts cut out from abridging.

its probably a better read then listen. the story itself isn't necessarily bad, just hard to keep my interests. its one of the better abridgements I've listened to, hardly able to notice what was cut out, until the end where it abruptly stops, no resolution to the story, no epilog, nothing. honestly, don't waste ur time.

The story was fine just sucks it was abridged, but if your looking for a quick story with a bit more about kip fisto and a new clone trooper this is for you