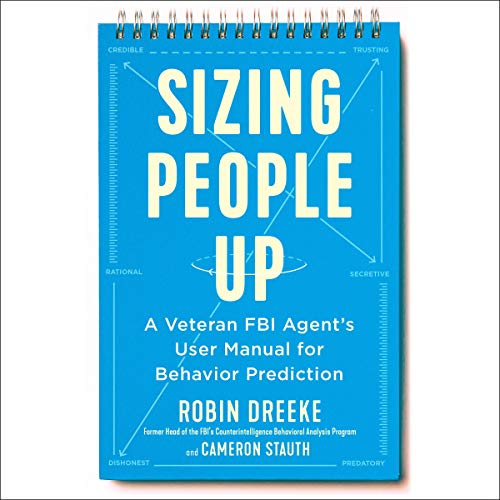 "An indispensable contribution to the field from a master practitioner. If your work would benefit from knowing what people will do next, this book is your new must-have." (Joe Navarro, author of What Every Body Is Saying)

"The illustrative anecdotes buried inside the instruction are exciting and insightful, and will attract thriller fans.” (Nashville Ledger and Rushville Republican)

A former FBI agent shares his simple but powerful toolkit for assessing who you can trust - and who you can't.

After two decades as a behavior analyst in the FBI, Robin Dreeke knows a thing or two about sizing people up. He's navigated complex situations that range from handling Russian spies to navigating the internal politics at the Bureau. Through that experience, he was forced to develop a knack for reading people - their intentions, their capabilities, their desires and their fears.

Dreeke's first book, It's Not All About "Me", has become a cult favorite with audiences seeking to build quick rapport with others. His last book, The Code of Trust, was about how to inspire trust in others as a leader. In Sizing People Up, Dreeke shares his simple, six-step system that helps you predict anyone's future behavior based on their words, goals, patterns of action, and the situation at hand.

Predicting the behavior of others is an urgent need for anyone whose work involves relationships with others, whether it's leading an organization, collaborating with a teammate, or closing a sale. But predictability is not as simple as good and evil, or truth and fiction. Allies might make a promise with every intention of keeping it, not realizing that they will be unable to do so due to some personal shortcoming. And those seeking to thwart your endeavor may not realize how reliable their malevolent tells have become.

Dreeke's system is simple, but powerful. For instance, a colleague might have a strong moral code, but do they believe your relationship will be long-term? Even the most upstanding person can betray your trust if they don't see themselves tied to you or your desired result in the long term. How can you determine whether someone has both the skill and will to do what they've said they're going to do? Behaviors as subtle as how they take notes will reveal their reliability.

Using this book as their manual, listeners will be able to quickly and easily determine who they can trust and who they can't; who is likely to deliver on promises and who will disappoint; and when a person is vested in your success vs. when they are actively plotting your demise. With this knowledge they can confidently embark on anything from a business venture to a romantic relationship to a covert operation without the stress of the unknown.

Robin has learned some rock solid truths in his years of working as a spy:

- that the nature of relationships is reciprocal value
- people tend to act in their own self interest, and when they don’t it’s a data point

And distilled a practical system for evaluating whom to trust. I think it’s brilliant, and every bit as useful as his Code of Trust method for healthy relationship building.

Best read of the year so far.

Highly recommend this book, I’ll definitely be repeat listening to this one & using my notes in both my professional and personal life.

This is an easy to listen to and overly simplistic book mostly about how to choose people who may be good to work with. Not so much about sizing people up in general; more of a coworker fluff piece.

I’m a fan of the show Criminal Minds & this book gave me great insight into how to understand behavior patterns to let me improve my work relationships significantly. Thanks!!!

Even though this is a book about ‘sizing other people up’ I couldn’t help but self reflect and see the gaps in myself and how I could improve. If this is how we evaluate other people, how do I evaluate myself? How can I become more of the person I want to be?
Overall: I really enjoyed this book. The pace is steady, the chapters have a good mixture of information, personal stories and the structure is easy to follow and learn.
I think there are multi-levels in this book in which many people can learn from... not just how we evaluate others, but the building blocks within our relationships that form bonds and why.

Takes a very negative view of people. I assume a function of dealing with twisted and evil people. Either a mistake or arrogant to extrapolate to general population.

Horrible book never gets to the point

This guy just goes on and on and on and you wonder after an hour and 20 minutes what is the point refused to waste a credit on another boring book! Returning!

First of all, I liked the bit of intrigue that accompanied this book. Without the back drop of some of the stories this book would have been fairly bland. One of the challenges that I often find with these books is that the authors often make the art of reading people and their behaviors as something that is easy and everyone can do. In my experience these types of skills take years for time and practice to be able to do it consciously in any situation. However, there was some very good content on how to approach the thought patterns associated with this type of art.

Listening for the second time

Mostly good, however, I do disagree with several comments/beliefs.

Perhaps for the second edition Robin can employ a profession voice actor. Sounds too much like Jocko Willink - aggressive.