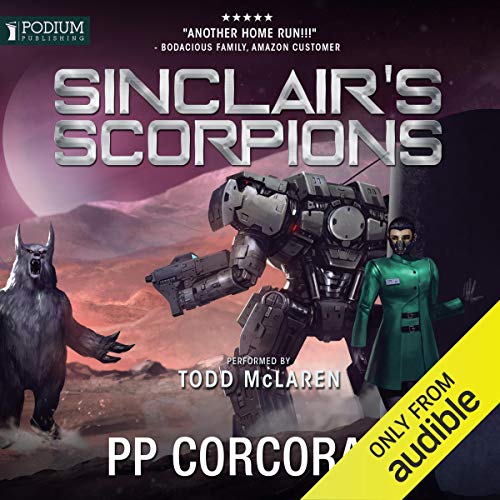 The Omega War is in full swing. Earth has fallen to General Peepo’s army, and the surviving human mercenaries have taken refuge at the hidden Winged Hussars’ base in New Warsaw.

As humanity begins to think about how to recover the planet, one thing is obvious - more powerful weapons of war will be needed in the effort. One of the keys to recapturing Earth will be the Raknar of Cartwright’s Cavaliers, but the power sources of many of the giant mecha have become unusable over the course of history.

More are needed, and Alistair Sinclair knows someone who may have a line on where to get them...a secret Science Guild base where they’re being developed for the Mercenary Guild to power the Raknars Peepo has been collecting.

While the Four Horsemen try to hold back the Mercenary Guild forces, Alistair volunteers his Scorpions to track down and bring back the power sources the Raknar need for the assault on Earth.

The Scorpions operate by guile, not overwhelming power, but will guile be enough when all the forces of the Mercenary Guild are arrayed against them?

Another book, another author

While I enjoyed PP Corcoran's writing and even a great deal of the story, it is another tangential book to the main series which was a bit disappointing. Even while the character and world building was well written and defined, the book had left several things dangling, presumably, to tie into the main series at some later point in the series.

Pros:
- character and world building
- battle encounters where most of the protagonists died which added realism to what was supposed to be an impossible task
- one of the MCs also died further adding to the story's credibility
- The introduction of the brutal and massive Jivool who appear to be an analog to the Halo Brutes
- The narrating performance of Todd McLaren again adds to the listening pleasure of the book

I’d go to war with these Scorpions any day!

Outstanding clan! The Author definitely knows the military jargon that catches and adds to the realism of the story. I could imagine and visualize exactly what was being done by all of the characters, whether in the middle of combat or in times of happiness or grief.
Job well done, from writing to performance!