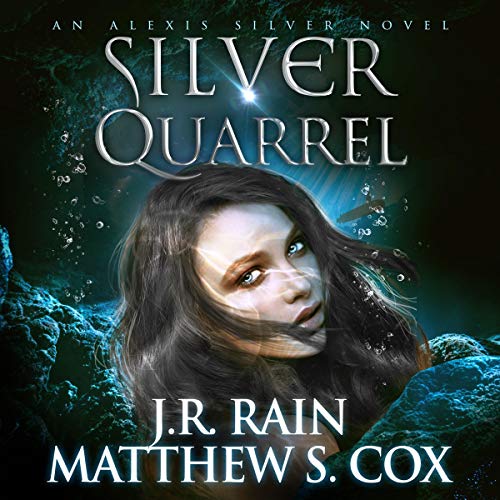 Alexis Silver has worked as a PI long enough to have many strange clients try to hire her...but the CIA is a first.

People have secrets, mermaids more than most. When a CIA agent shows up claiming to know her biggest one, Alex finds herself at a disadvantage. However, the government wants her help. Despite being beyond the cares of mortals, she still considers herself an American and feels obligated to do what she can.

Disappearance cases are fairly routine, but a desperate thrall hiring her to find a missing vampire is a bizarre twist that piques her curiosity. Tracking down an off-the-grid undead is like being right back to the 1940s. All she’s missing is the fedora.

An inexplicable change has happened to the fabric of the universe, evidently driving some dark masters insane. An Ohio-class nuclear missile sub is about the worst place imaginable for a werewolf to have an existential crisis. Though mermaids aren't well equipped to fight other supernaturals, Alex isn't about to let nukes hit the US.

Even if it kills her.

Okay now I know this is really not my type of book but I really like it. It’s a great read but I need some romance here lol. Again Kelley Huston did an amazing job at narrating

Another amazing story. I absolutely love Alexis and the adventures she seems to get up while working her PI cases.
The mystery surrounding the dark masters are really starting to heat up and I am excited to see what is in store for not only Alexis but her own dark master.
I read and listened to this book and the narrator does an amazing job as always

this book is amazing the series gets even better as it goes on. I love the main character Alexis Silver she is brave and very compelling! I like how the story sticks with the theme but also adds different twists to keep the listener interested. I highly recommend this book! * I received this free audio book for an honest review*

As in Books 1 & 2, I totally enjoyed it! The plot and storyline were as good as ever! Once again the narrator brings the characters to life wonderfully! I was given this free review copy audiobook at my request and have voluntarily left this review.

I love this series and this was a great addition to it. Alexis Silver is a mermaid, but she's definitely not the Disney type! She was turned about 100 years ago when the ship she was on sank and she was found by a merman. Now, she is a private detective (even though she definitely doesn't need the money).

The first part of the book finds Alex working with the CIA to take down a rogue werewolf. The second part of the book focuses on her quest to find a missing vampire after she is hired by his enthralled slave. Both stories are great fun with enough humor to lighten the action involved. There is plenty of fun and emotion throughout this book and I love the interaction between Alex and her Dark Master, Lucinia.

I look forward to the next book in this series to see what happens with the strange occurrences of the being called Elizabeth. And, I would love to read more books involving the kickass vampire hunter, Emma.

The narrator is absolutely perfect for this book and her performance makes this already wonderful read even better. I can't imagine anyone else as Alexis! I was given the chance to listen to this audiobook by the author/narrator/publisher and chose to review it.

Not your typical mermaid and I absolutely love it!

Silver Quarrel is the third story in the Alexis Silver series and they just keep getting better. Alexis finds herself off trying to save a nuclear sub from a rogue werewolf for the CIA. And then, teams up with the most unlikely of allies to track down a missing vampire. This one was action packed, the audio narration is fantastic and I can't get enough. The dark masters are planning something and I can't wait to see what happens next!!

I love this series so much! Each book does sort of stand alone but I’ve enjoyed listening to them as a series. I’m curious to find out what is going on with the dark masters. Seems there is starting to be some sort of larger plot going on that Alex is going to have to deal with as super natural creatures are starting to do things to try to get them selves killed as some of the dark masters seem to want to do something. I love Alex as always and I loved the vampire hunter. I can’t wait to see what’s next for Alex and her dark master. I

This us the third book in the Alexis Silver Mermaid series and the books just keep getting better! Mermaids, werewolves, vampires, and vampire hunters. It is exciting to listen to with ll the twists, turns, and humor! Keep it going!!!

Yet another great book to the series! I’ve really enjoyed these stories so far it’s entertaining but easy to listen to! I like that it doesn’t have a heavy and deep storyline, it’s the perfect book to listen to while cleaning or working out or just generally unwinding from a busy day. The narrator was fantastic she has a lovely voice and pronounces the words very clearly.
Looking forward to the next book in the series

A short easy to listen to story.
Book 3 of the series.

Good book but uses repetitive information when not needed and also patches of information dumping rather than writing a fuller story.

I enjoyed the first 2 books of this series and book 3 didn't disappoint. I enjoy the humor and intrigued that comes from such a unique view of a mermaid PI lol. great listen, recommended.

Werewolves and Vampires have nothing on Alexis

Alexis is asked by the CIA to help when a werewolf goes rogue on a submarine ( that brings a whole new prospective to canned meat . did you like my Licinia pun 😂) Then she’s hired by a girl under a thrall to find her Vampire boyfriend who it turns out as gone on a mad killing spree. While searching for the vamp she meets a Hunter who’s almost as kickass as Alexis and they work together to catch the vamps. When Alexis confronts the vampire he tells her his dark master had taken over in hope of getting him killed so now Alexis and Licinia must try find out what the dark masters are up to.