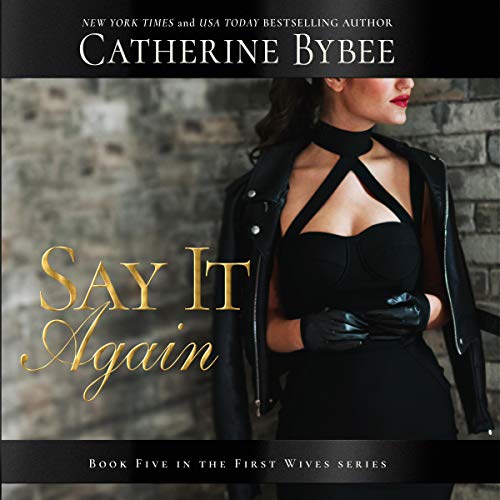 “Bybee’s heart-stopping fifth First Wives novel (after Faking Forever) is a twisty romantic thriller…Steamy, fast-paced, and consistently surprising, with a large cast of feisty supporting characters, this suspenseful roller-coaster ride will keep both series fans and new readers on the edge of their seats.” --Publishers Weekly

In the final First Wives novel by New York Times bestselling author Catherine Bybee, falling in love could become the most dangerous dare of one woman’s life.

Protector-for-hire Sasha Budanov is accustomed to life as a loner. Always on the move, she’s now reached a crossroads. Looking for answers about her shadowy youth, she’s returned to the strict boarding school in Germany where she was raised. It’s also where she was trained in the stealthy, militarized art of survival. But behind its gleaming gates, Richter is a fortress of secrets, including those buried in Sasha’s mysterious past. To uncover them, she’s clinging to her first rule of defense: stay guarded.

If anyone can challenge Sasha’s rules, it’s devilishly sexy stranger AJ Hofmann. He wants answers, too. And he needs Sasha’s help. The recent deaths of several of Richter’s former students - including AJ’s own sister - have aroused his suspicions. He’s arousing something more in Sasha. Never one to surrender to her emotions, she senses something tempting in AJ. She trusts him. He’s fearless. And he kisses like a demon. Sasha’s found her match.

But treading Richter’s dark halls - and following their hearts - has its risks. As the decades-old secrets of the past are mined, Sasha and AJ are falling deeper in love...and into danger.

Sasha Budanov is The Closer

Sasha Budanov was a badass woman in the best sense of the word. She evolved from a mysterious woman in the first book to a genuine member of the family and team at the end of this book. Her evolution was done at the right pace that the reader was right there along with her. Sasha is the person you always want to have at your back, whether you know she’s there or not. Sasha’s technically not a first wife but she’s as much a member of this chosen family as any of them.

I love when a woman is Bourne and Sasha is Jennifer Garner’s Alias and Matt Damon’s Bourne rolled into one character. I just love this character.

Bringing AJ into her world just made it a perfect revelation that the loner she thought she was, was a carefully crafted mask to protect her heart from the love she never received as a kid. He wasn’t the person you’d imagine for Sasha, yet he seemed to be just the right amount of nice guy with a touch of bad boy, adrenaline junkie perfection Sasha needed.

The story itself was very Jason Bourne with Sasha at the center of it all. The interplay between her and the team, "Are you a dad yet" was funny and like all good ribbing you get from your siblings. The added character which mirrored Sasha’s own upbringing yet meeting Sasha, AJ and the team changed the direction her life could’ve ended up going in a good way. Sasha being a “big-sister” of sorts lent heart to her and the story.

I can't believe that I avoided this series because I didn't want to read another romance novel, but this series is very different with strong-willed woman at the forefront and the alpha men who love them without controlling them. It’s still romances but with contemporary realism that keeps you interested. I listened to this book on Audible and the narrator, Emma Wilder, did a wonderful job especially with Sasha's accent and the male voices. I'm glad the publisher keeps the same voice throughout a series for Catherine Bybee.

I’m looking forward to Catherine Byee’s next series and I hope her trend of storytelling that has less focus on marriage and babies being the end all and be all of life continues.

Another great story from Catherine Bybee..

A little disappointed in this book. I expected Sasha to be a little tougher than she was. She didn’t show any “muscle” until the end of the book. BUT it was still a wonderful story. I’ve like Sasha since the beginning, so I was only an eensy-weensy bit disappointed. This is the 25th book of Ms. Bybee’s that I’ve listened to, so I’ll continue to read/listen to her. I’m looking forward to whatever she writes next.

I liked AJ and it was nice to see all the wives and their husbands and kids.

I liked that there was a murder mystery in this book instead of just a romance. 300+ pages of just romance, angst and misunderstandings is too much of all that. But that’s just my opinion.

There was one sex scene, which was nice that sex didn’t dominate the entire story. And the F-bomb was used 9 times.

As to the narration: Emma Wilder did a fantastic job on this book. The voices and emotions were spot-on and she’s quickly becoming one of my favorite female narrators. Love, love, love a female reader who can do a man’s voice and not just women. Nothing worse that a man who sounds like a woman in a book.

This is truly one of THE BEST SERIES I've read!! They have love but the stories are amazing! Full of depth and excitement, action and the best character profiles!!! I hope this isn't the last, Ms Bybee. And the audio versions.... holy moly.... THE BEST! The performances of each one of these books are spot on and such a joy to listen to! Please keep 'em coming!!!!!!

Loved it! I loved this entire series. This was a great story and great narration.

I’ve been waiting for Sasha’s story and this did not disappoint. What a great look into this complex woman’s background, fully flushing out her character and humanizing her. The narrator did a great job too, adding to the story.
This is not a stand alone novel. Without reading the previous books in the series the reader wouldn’t understand the pain, isolation and abuse that Sasha has endured and overcome
In this book she works WITH the team instead of alone to find the killer of 3 innocent alumni of her boarding school. One of them is the sister of the sexy AJ. He too is a loner. Together can they find the killer and love at the same time?

I like to listen while I play computer games or drive or work or whatever. This book was too intricate for that. It was good. Just not my cuppa tea.
Good narration. Both male and female voices were good.

Strong ending to this series!

This was a great book to wrap this series. And the perfect segue into the Richter series

This book wrapped up a wonderful series! I am so glad I decided to read the 1st book that took me on a journey that ended Better than I expected. This series was a rollercoaster ride and I would do it all again!

I loved Sasha and A.J.’s suspenseful romance, the appearance of all the supporting characters throughout the series, and the very satisfying happily ever after but I’m also really unhappy that the series has to come to an end. Sasha has always held a tender place in my heart since the first time she appeared in the series. Yes, she’s a fierce, strong, and highly trained operative in her heart she’s an orphaned child of a murdered woman who has never had someone engage her heart. A.J. recognizes the vulnerability in Sasha and I couldn’t resist opening my heart to them both. Catherine creates strong, capable and vulnerable women, Alpha males who make my heart beat faster, and writes intricate plots that always keep me intrigued, engaged and entertained. I listened to the audiobook version and I was blown away by the excellent narration performance of Emma Wilder whose talent for accents and convincing male character voices is exceptional. She was the perfect voice actor for this series and I highly recommend these audiobooks to fans of romantic suspense.

If you liked the first four books in the First Wives series, you’ll like this one as well. It had all the wonderful intrigue, love, and found family that I picked up this book to find. On top of that, the narration was spot on.

Loved it to the moon and back!!!

Just what the conclusion to this amazing series needed not one, not two but three kick-ass women!

I didn't think Sasha could meet her match but when she returns to the school where she was trained and moulded she comes across another orphan, Claire, who is as bright and strong as she is, and only 18.

Sasha, bored of her drama-free life, heads to Richter to find answers and a new direction but what she stumbles across finds her wanting to help the students there avoid the trappings of their destinies. When Sasha is approached by AJ Hofmann in a bar she presumes he is just hitting on her until she realises he is the brother of her old and now dead classmate, Amelia Hofmann. Seeking answers to why Amelia was killed, AJ asks Sasha for her help and before long they are investigating numerous deaths and one missing person.

Knowing that she can't investigate Amelia from inside the secure fortress that is Richter, Sasha asks Reed for his assistance and before long the whole security team is involved. AJ is stunned to find himself being flown around the world on private jets and staying at luxury mansions but he soon comes to realise that Sasha and her friends wield a lot of financial power.

This story takes readers across Europe and back to the US as Sasha tries to reveal just who is recruiting the students from Richter. With AJ at her side though, she finds herself becoming too comfortable with having a man supporting her emotionally and the tough egg starts to crack as her outer shell starts to weaken thanks to the attention AJ bestows upon her. AJ is the perfect man for Sasha. I really had no idea who would be able to tame her wild and independent ways but AJ knows just how to handle her emotionally and physically.

I really enjoyed the sexual tension between Cooper and Claire and would love to see how their working relationship pans out. Olivia was also a force of nature and a real challenge to Sasha's skills. Poor Lars experienced her strength first hand with a really funny but brief scene and show of dominance.

I'm sorry to see this series end and I can't wait to dive into new stories from this author. That said, I'm sure there could be more First Wives stories yet to be written and I'd love to read Claire and Olivia's stories!!!

Persisted to 4hrs 32 mins after nothing much has happened then gave up. Sacha is "anorexic", but has the energy for the story line of being a super mover in the spy world, and an athlete? Characterization reminds me of Helga from Allo Allo without the sex appeal. No alpha role, no love action, no point. It's been a surprize as book 2 and book 4 of this series are excellent.