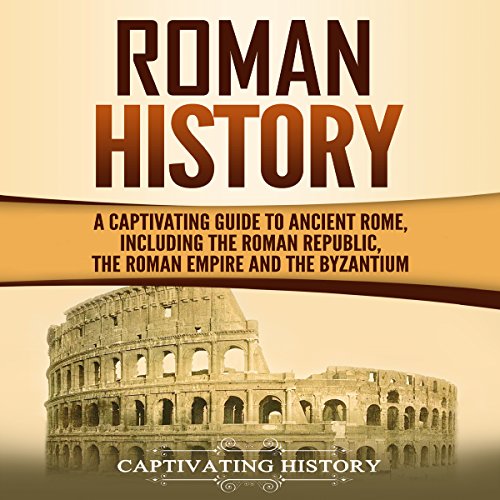 Three captivating manuscripts in one book:

Some of the topics covered in first part of this book include:

Some of the topics covered in second part of this book include:

In the third part of Roman History: A Captivating Guide to Ancient Rome, Including the Roman Republic, the Roman Empire and the Byzantium, you will:

All this and much more awaits you, so get instant access now by downloading now!

This book is written at, I suppose, a 10th grade level - which would be fine although I still wouldn’t want my kid listening to it.

The narration here is remarkably poor, and the narrator approaches it as though this were the first time he’s encountered Roman history, the very text he’s reading, and indeed some of the words within it. The content feels at times like a book report wherein a student shoves in random thoughts, assumptions, and observations, all in an effort that make it longer (which it does) or more weighty and interesting (which it does not).

There is no depth here. I would stay well clear of it. It isn’t as though there aren’t a great number of books available on this same topic, almost any of which will prove more worthy of your time than this one. Dive in to one of those, instead.

I came across the most critical events in the Roman history as well as the mighty and legendary characters. The whole discussion was imaginative and organized.

l got so much

Snapshots of Roman history! Learned a lot about the empire and how they dealt with the then-changing waves of tyranny and colonialism. Great read!

Educational and inspiring one. The Roman history was the wealthiest in history, thus, I’m looking forward to learning more of their rich history. And I was fed with enough details by this audiobook.

This book brings the story and history of Rome to life. I loved it and felt almost as though I was there. Nothing dull about this. Highly recommended.

This book is very well written, it flows well and is not too academic. I would recommend it if you are planning a trip to Rome, as it will make you able to better appreciate all the history the city has on offer.

A very enjoyable and good history a on Roman history, a good description on the Republic period as well. The author provides good, basic understanding or Roman history.

The book was concise and informative.such a tedious subject matter with such point by point clarity. Would recommend this for any person who is serious about knowing this subject matter.

The writer of the book took the time to discuss everything in Roman history as simple as possible and as thorough as possible. I learned few things which were not taught in school. Great one!

A great comprehensive history of the greatest Empire of all time. Even though he covers nearly a thousand years, The Author does a good job outlilning and going into detail on all the most important topics.

A good book, but lacking depth out of design. It provides a great gloss of the expanse of Roman history, and also indications for future. A good introductory book, but those seeking more depth would do well to seek other sources after having completed this one.

Skips through Rome's history way too fast. Would have been better to spend its time on a shorter period. Some baffling pronunciation errors and plenty of mistakes that should have been picked up during recording. Also sounds slightly like it's being narrated by Alexa.

It is organized around concepts, culture, and events. It opens to our view an important history of the West that is typically hardly touched on in most historical accounts. It is well written and is easy to understand but oddly, it's not a compelling that you can't put down. Nevertheless, it is interesting and quite informative.

Hahn does a great job of explaining the book of Romans to lay people. His writing is intelligent, yet very accessible. I hope he does more commentary on other books of the Bible! PS: I'm a Protestant.

This was an excellent book. Sometimes we think our eyes are open when it comes to scripture. This book will open your eyes wider.

I love historical documents that cover the unknown figures, especially the slaves who made the Roman Empire possible

Many of the Volumes on Roman history are excruciatingly long. This book covers the almost all history of Rome in a easily consumable time.

A good way to understand history

I wanted a good introductory book on the Roman Empire before our trip to Italy. This book did not disappoint. I found this AUDIObook to be a real good that provided an excellent foundation of key events during the Roman Empire.

The Roman citizenry and their role in the direction of Rome, Nero and the near demise of his own Empire, the influence of Christianity on the Empire and much more.