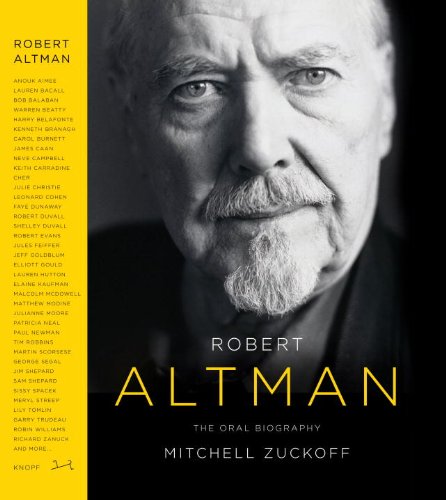 Robert Altman - visionary director, hard-partying hedonist, eccentric family man, Hollywood legend - comes roaring to life in this rollicking cinematic biography, told in a chorus of voices that can only be called Altmanesque.

His outsized life and unique career are revealed as never before: here are the words of his family and friends, and a few enemies, as well as the agents, writers, crew members, producers, and stars who worked with him, including Meryl Streep, Warren Beatty, Tim Robbins, Julianne Moore, Paul Newman, Julie Christie, Elliott Gould, Martin Scorsese, Robin Williams, Cher, and many others. There is even Altman himself, in the form of his exclusive last interviews.

After an all-American boyhood in Kansas City, a stint flying bombers through enemy fire in World War II, and jobs ranging from dog-tattoo entrepreneur to television director, Robert Altman burst onto the scene in 1970 with the movie M*A*S*H. He revolutionized American filmmaking, and, in a decade, produced masterpieces at an astonishing pace: McCabe & Mrs. Miller, Thieves Like Us, The Long Goodbye, 3 Women, and, of course, Nashville. Then, after a period of disillusionment with Hollywood - as well as Hollywood's disillusionment with him - he reinvented himself with a bold new set of masterworks: The Player, Short Cuts, and Gosford Park. Finally, just before the release of the last of his nearly 40 movies, A Prairie Home Companion, he received an honorary Oscar for lifetime achievement from the Academy, which had snubbed him for so many years.

Mitchell Zuckoff - who was working with Altman on his memoirs before he died - weaves Altman's final interviews, an incredible cast of voices, and contemporary reviews and news accounts, into a riveting tale of an extraordinary life. Here are a series of revelations that force us to reevaluate Altman as a man and an artist, and to view his sprawling narratives with large casts, multiple story lines, and overlapping dialogue as unquestionably the work of a modern genius.

I bought this book at full price, and as the read began, felt certain I had made a huge mistake. Contrary to the very misleading description given for this item, 98% of the voices of the celebrity narrators listed-- including Robert Altman, himself --are fudged by 3-4 professional audiobook readers, NOT contributed by the actors, directors and producers themselves. The listing of narrators certainly should be changed to protect buyers.

Nevertheless, this is a great audiobook, fully captivating, throughout every one of its 18+ hours. In fact, I liked it so much, that the minute it ended, I played it again, start to finish. It is that insightful, informative and entertaining. The actual voices of Altman's wife, Kathryn, and those of his daughters and sons, along with the stunningly good portrayal of Robert Altman's voice by actor, Michael Murphy, are well worth the price of admission. If you weren't an Altman fan before, this will make you want to rent each of his movies in turn, to experience what you've missed of his extraordinary talent on screen. There will never be another like him and he is missed!

Better Than The Book, With An All-Star Altman Cast

The best audiobook I've listened to in a long time.

When Robert Altman died a few years ago, it put into doubt the book that he and Mitchell Zuckoff had been working on. It's hard, however, to imagine how their collaboration could be better than this. Robert Altman's discussions of his movie career are included throughout, but the observations by the other narrators make this audiobook better than the book could be.

Many participants in his movies are quoted at length. In many cases, the narration is done by the actors themselves. For example, Tim Robbins talks about the way he was hired for his starring role in the movie, The Player. Altman's wife, Kathryn, and several of their sons are the actual narrators for their sections. The result is a rich look at his life, as seen by Robert Altman and the people who knew him.

Where are the Pictures?

This is an interesting and informative book. However, the hard back book contains hundreds of pictures. The biggest challenge that I have with audio books do not include a document or an Adobe file to download with the pictures included in the book. This is a big drawback for me as a long time subscriber, which needs to be resolved to compete with the all the downloadable book options available to keep subscribers like myself in the future. I hope they find a resolution to this problem. I have seen these files available for very few of the books, however there are some.

Enjoyable book and some of the personal information jumps around so it is hard to follow, entertaining.

A Tribute to one of Hollywood’s Last Mavericks

What made the experience of listening to Robert Altman the most enjoyable?

I liked that most of his films were talked about in depth. Also, because it is packed with anecdotes from family members, actors, and crewmembers who mostly read their own accounts.

What other book might you compare Robert Altman to and why?

I've listened to and read many actor and filmmaker biographies and this is probably one of the best, if not the best. I'd compare it to David Carradine's 'Endless Highway.'

I liked that many of the narrators were actually reading their own anecdotes from the book. I think this elevates the experience over reading the written version.

Not really. It's very long and that's good. I didn't want to stop listening most of the time but to listen to the entire book in one sitting is a bit much.

I think that this audiobook is one of the best examples of having a listening experience that is greater than the written version because it is packed with anecdotes from family members, actors, and crewmembers who mostly read their own experiences. Altman was a larger-than-life figure who had appetites that matched his filmmaking talents and this is a fitting tribute to one of Hollywood’s last great mavericks. I would highly recommend this title to anyone who is interested in film or listens to biographies about filmmakers.

I thought this was a wonderful book. Altman seems like a character in one of his movies. Ok, he is not a very attentive father and he has drinking problems, but he seems to have had a great time doing mostly just what he wanted. It was nice to hear the different opinions of him from the people he worked with and around. Narration is good, Not a good listen for children -- some strong language and some discussion of affairs. Now I will have to watch his movies again!

Maybe An Hour Or So Of Good Material

Would you try another book from Mitchell Zuckoff and/or the narrators?

No from author, yes from narrator.

Has Robert Altman turned you off from other books in this genre?

What character would you cut from Robert Altman?

Be Warned: When I bought this book, Audible had numerous actors like Meryl Streep and others listed as narrators. Not true! The narrator narrates their stories.

The main actor that did read and did a good job (and is the one hour or so of good material out of 18 hours) is Tim Robbins. He actually talks about movie making, the artist that was Robert Altman, etc.

Be Warned Again: Approximately 17 hours of this book is the narrator quoting people that worked with Altman that all tell the exact same story: He was an alcoholic, drug addict, asshole that you got used to if you gave him enough time to grow on you.

I could not get over how prevalent that theme was and how comparable the stories the various actors, etc that the narrator quoted told throughout the book. As soon as one actor got done, another actors story started and, to compare it to written material, it might as well have been the same story written in a different font.

I decided to tough it out to see if it got better, and Robbins material is interspersed throughout the book, so in short, to get that hour, you listen to the book.

Here is what I would recommend: Any time a story starts being told and you can tell the person is going to tell this "He's An Asshole That Grows On You" story, simply fast forward till you recognize a different voice and see what that person is discussing.

I have never returned a book to Audible, but this is one of them I would seriously consider.

This could have been very interesting but saying who is speaking EVERT time someone said something was very annoying. I don't beleive it was the actual actors narrating it, and it didn't matter, it was disjointed.

repeats of ‘what a great guy’ nothing else

I don’t recommend this book to non-TV, non-movie watchers. Someone recommended this book to me. However, maybe because I very rarely watch TV or movies, I didn’t understand who/what they were talking about. Seemed like just a bunch of repeats of ‘what a great guy’ and nothing else to this book. Very boring & a waste of my time.

Robert Altman is my favorite director, and I've seen most of his movies. But I don't know much beyond the movies themselves -- what took Altman so long to get started, why these particular movies were made, what the actors thought, what the critical and popular reception was, why Altman receded in the 80s, how he came back with The Player, etc. etc.
This book answers all these questions and more, often with the actual participants narrating.
It's really all I could have hoped for, and more. Really sorry to have it end.

A great book to read NOT listen to

Beware: this book may be based on recorded interviews BUT these interviews are not what you'll hear: you'll hear people--in most cases not the original interviewees--READING the transcripts of the interviews.

This creates a very disturbing feeling as you listen on: while the grammar is oral, the words are clearly read, not spoken. It's a disaster. Presumably retrieving and using the original interviews was not possible, but the result is that you should probably READ this book, as the experience of listening to it may be, as it was for me, unnerving.

The book itself is quite fascinating. It might be shooting in many directions sometimes, but the choice of creating a complex, multifaceted portrait through many, sometimes contradictory points of view, is great and does Altman justice.