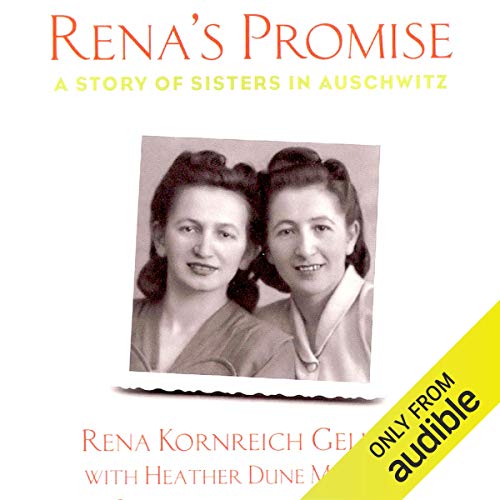 "I do not hate. To hate is to let Hitler win." - Rena Kornreich Gelissen.

On March 26, 1942, the first mass transport of Jews - 999 young women - arrived in Auschwitz. Among them was Rena Kornreich, the 716th woman numbered in camp. A few days later, her sister Danka arrives and so begins a trial of love and courage that will last three years and 41 days, from the beginning Auschwitz death camp to the end of the war.

Rena's Promise stands out from other memoirs not only for the mere length of time she spent in the camps (no other survivor from the first transport has ever written about her experience) but for her dedication to honoring the bonds between mothers, daughters, and sisters, prisoners, and even guards. From her escape from Dr. Mengele's experiment detail to her surreal meetings with SS woman Irma Grese, Rena tells a dynamic tale of courage and compassion that reminds us of the resiliency of the human spirit, and the power of people to help one another in unimaginable circumstances, be they Gentile or Jew, German or Pole, kapo or prisoner.

You could fairly say I am addicted to Holocaust survival stories. I never tire hearing about people’s challenges and how they overcame the worst possible odds – it’s an amazing testament to human resilience. Always impressive.

The production value of this audio book however is the pits! It’s as if it was recorded in 3 different rooms, and then spliced together to make one audio file. The sound is jumpy, the volume is inconsistent, I even thought the narrator had changed on occasion… it did the subject matter a huge disservice as the cuts were so jarring and distracting.

I wish there was a way to rate this other then lumping it in with “performance” in Audible’s star rating system because this is not a critique of the narrator. Overall, it was great content, just a terrible assembly.

I love this book. I chose this memoir for my college Holocaust history corse research paper. It's incredible what those girls had to go through and they still used their agency to live happy successful lives. It's also wonderful how it brings to life the actual people who were sent to these camps, how they were just that. People. not statistics or numbers but actual people who were cast down by their society because of their religion. It's devastating what happened to those people and it should never be forgotten. I believe everyone should read this book. If we don't educate ourselves on subjects like this, if we act ignorant or disassociate ourselves with these people then mass genocide will continue. I also very much appreciate the authors not at the very end about her cat. It brought a smile to my face :)

Yes; although hard to follow this book shows how the love, mutual commitment, and wit of two sisters helped them to survive years in a concentration camp.

Would you recommend Rena's Promise to your friends? Why or why not?

Was Rena's Promise worth the listening time?

Well … yes. The biography is compelling although I am not likely to re-read it because the book's organization between the past and present makes it too difficult to follow. It could have benefitted from another round of editing before it went to print.

The substance of the book would make a good movie.

I first listened to 999, which was a great book excellent narration. I decided to get this book by the author. 999 had a professional narrator, this book was narrated by the author and was spliced several times and annoying. I had to adjust my volume often, and the narration fell flat often. The story itself was very good, so I pushed through. The story is worth redoing the narration.

Fantastic memoir. Fortunately the low production quality doesn't take away from the story. I would recommend this book to anyone interested in holocaust memoirs.

Only if they fix the volume on the recording--this went up and down through the whole story.

What other book might you compare Rena's Promise to and why?

Which character – as performed by Heather Dune Macadam – was your favorite?

Do you think Rena's Promise needs a follow-up book? Why or why not?

the only reason I gave this book a low rating in the overall category was the volume was not adjustable on the book..sometimes it was low and then other times it was too loud

One you will also want to get in hard copy and keep on the shelf.

I had not heard of Rena’s Promse and read 999 first. These books are so well written. I’m a seasoned Holocaust reader and I’m so thankful for the talented writers that work with these amazing people to bring the stories of their lives to us. This one, and 999 belong on your shelf so run out and get a hard copy as well.

Oh I wish they would have sprung for a professional narrator. The authors voice and her impression
of a polish accent is enough to make your ears bleed. Is was practically unlistenable. And the way the author insinuates herself into the importance of this story is enough to make you wretch.
Really horrible performance. If there is ever a book on knitting or casserole making,
the author maybe could read that outloud to her stupid cat. But that's about all I would grant her.

What a gripping story.

I’ll probably never be the same. Every time I I feel like the world is against me I’m going to remember Rena. Well worth the time.

An inside look at what happened at Auschwitz prison camp

This book is a detailed first hand account of lives the of women who were interred at Auschwitz. It is beautifully written and read. I encourage everyone to listen to it, and please recommend it to students. This history is not being taught today, and young people will not be aware of how devastating it was. Very touching and enjoyable read.

The recording of this audio book is awful the narrator has self edited and recorded over her recording, the audio jumps and repeats itself which is annoying. All through the book there is back ground noise and a bell and it turns out it is the narrators cat! Unbelievable. The story was the only thing that kept me going as I would have requested a refund because the audio quality was so bad. An amazing story of human strength and courage in the face of adversity. Thank you for sharing your story Rena.

The story is important and worthy of a listen but the performance is awful. Apart from the accent and the style of the reader, it is as if she has recorded it at home. You can hear whirring and noises in the background and this is abrasive. A real disappointment.

The story is very inspiring if you can endure the reader. I think the author recorded it at home on her personal computer without any guidance and it shows. Her vocal inflections are forced and annoying. I would love to hear this story performed by a professional with some experience!

The truth of the hell

....i force myself to listen to as many accounts as i am drawn into...and i lose a piece of my heart in each...but it is a reality we need to know....🙏

This is not an uplifting book . This brings home the true horror of the holocaust with no Hollywood flannel . Hard to believe this was happening in Europe 70 years ago .

This is beyond the imaginable

Rena and her sister went through hell . Their daily fight for survival is beyond imagination for us who can just walk to the cupboard if we are hungry or thirsty.
The cruelty is unbelievable. I can not get it into my mind how a human can do to another what they did to the prisoners and not just Auschwitz.
How could they sleep at nights? How could they carry on as if they did nothing wrong after the war? These people don't have any conscious if they think it was ok.
I am happy that Rena and Darla had a happy life after all they've been through.

The story was gripping but I have a little issue with the way it was presented. sometimes it was just read out as if a pupil in class was bored of reading it.
partly there were no emotions like I've experienced it in other books. That's the reason why I gave only 3 stars for the performance.

This story is, like all the survivors’ stories, hugely important.

Unfortunately the author, who did such a good job capturing Rena’s story, decided to narrate this and as a result the audio suffers for want of a professional. At times it is so bad that it is hard to listen. Rena is often given a bizarre inflection like Marilyn Monroe which makes her sound foolish (which Rena certainly was not), while the Nazis are voiced as a child might when playing with toys. It is so strange and incongruous to hear these ridiculous caricatures that at points I’m afraid the important story is all but lost.

This is well worth reading, but do yourself a favour and don’t listen to this.

Incredible story, just found the narrator annoying at times and there were also technical glitches, but it is definitely worth listening to. Sad but hopeful, an amazing testament.

Such resilience and positivity as well as inherent honesty saw arena survive for so long.

I am lucky to work from home as I could not press stop! Aghhhr my heart!

The will to survive is incredible and the love of Rena and her sister to do it together!!

The love of a blood relative, two sisters, to survive is incredible for over three years in these death camps when so many others fell. This is a remarkable story that had to be told. The research and footnotes add so much weight to the story. Highly recommended.