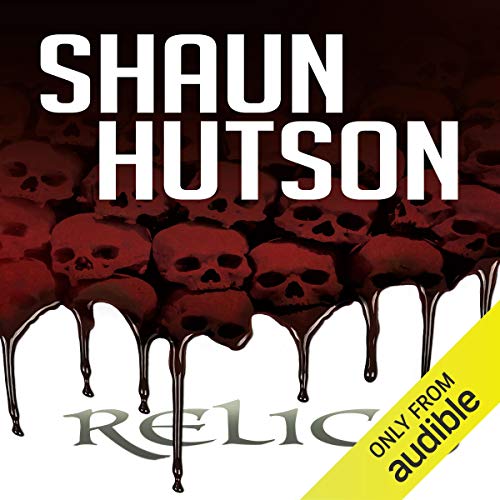 During an archaeological dig, a hidden chamber filled with the skulls of children is discovered. At first glance they seem to have been there for thousands of years but closer examination reveals a more shocking secret.

The opening of the chamber triggers a series of horrific murders, each victim mutilated and their entrails used to form a different letter of the alphabet. Who is behind this outrage? And how is it linked to a subterranean chamber thousands of years old?

An evil so old, so vile and so powerful that it threatens to engulf everyone who comes near it. For Wallace, and possibly for the whole human race, time is running out fast. Something evil is waiting. Something monstrous is loose...

Shaun Hutson is one of the UK's best known horror writers and author of over 50 books. He made his name with best-sellers such as Spawn and Relics - acquiring the nicknames 'The Godfather of Gore' and 'The Shakespeare of Gore' in the process – and has since written a number of dark urban thrillers as well. He has also written for radio, magazines, television and novelized a couple of Hammer Horror films.

What could Shaun Hutson have done to make this a more enjoyable book for you?

I have no problem with using graphic descriptions to enhance fear and horror in a story, but this book was one gore-fest after another. Fine for the first couple of murder/sacrifice depictions, but it just became boring. I believe more attention to the main characters and story line would have brought the book up a few notches from low budget, B-movie, horror show.

Mr. Holdbrook-Smith's performance was superb as usual. Transition from character to character to narration was smooth, in particular, the female and child voices are not jarring or overdone as I often find is the case with other actors.

The beginning of the book was promising. I could see the skeleton of a truly frightening story, but it seemed to me that the author didn't take the time to flesh it out. I did listen to the complete book because I kept thinking it would get better.

I can easily imagine this book as a graphic novel/comic. I would have enjoyed that more that listening to it.

Can't imagine who. I bought it mainly because the narrator is top drawer.

What was most disappointing about Shaun Hutson’s story?

It lacks just about everything one looks for in the genre ..or any genre.

Have you listened to any of Kobna Holdbrook-Smith’s other performances before? How does this one compare?

Yes. Mr Holbrook-Smith's performance was very good but the material was awful

This has the feel of a short story that had gone on a bit longer than expected.
If you've read/listened to other Hutson books then it will come as no surprise that there's lots of sex and even more graphic violence.
It's not the best horror out there, but something like those TV versions of hammer horror, that seemed scary when you were 10.
The narration isn't bad really but let down by poor editing down by poor editing.
;-) (did you see what I did there???)
Well you'll hear lots more like that in the book
Like that in the book (ok sorry I'll stop now)
It's very annoying though isn't it. And when you pay for something that isn't made correctly you would take it back and ask for one that's made correctly.
So sort it out audible.

Would you try another book written by Shaun Hutson or narrated by Kobna Holdbrook-Smith?

Might be willing to try another Shaun Hutson...will read the reviews first though. Kobna Holdbrook-Smith was the reason for listening to this as he's so good on the Rivers Of London series...

Has Relics put you off other books in this genre?

a little - although it does feel very dated.

I think he's the reason I listened to the end...with another narrator I might have thrown in the towel earlier.

there were some interesting ideas but overall it felt abridged

A nasty piece of work.

What disappointed you about Relics?

What was most disappointing about Shaun Hutson’s story?

I didn't care enough to finish it.

Would you be willing to try another one of Kobna Holdbrook-Smith’s performances?

No. even he didn't sound as though he liked it much.

Yes, thanks to Audible I can get my money back

This book was filled with unnecessary violence and distustingly detailed depictions of it. Especially the descriptions of dog fights were totally useless, even though the author may have written them as allegories for the attacks on humans.

Has Relics put you off other books in this genre?

Performance was good, but it did not save the poor content.

Not really, I was mostly annoyed in wasting my money on it.

The book is well written and I've enjoyed others by shaun Hudson but some of the killings in this seemed uneccessary.

One horrific murder to another, yawn

I think there is the basis of a good horror story but for me it seemed to just be one grisly murder leading to another with little to engage with around the plot.

What could Shaun Hutson have done to make this a more enjoyable book for you?

I find Kobna very engaging to listen to, shame there isn't more substance to the story