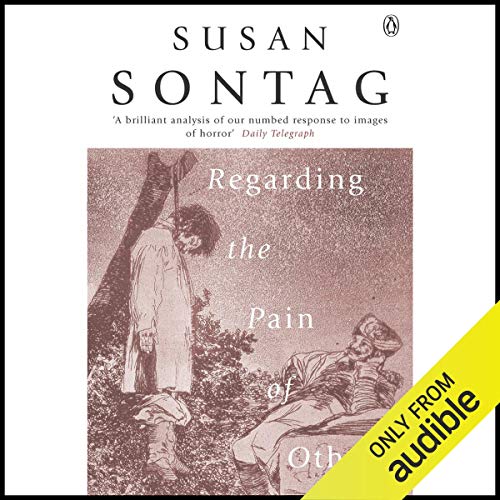 " Regarding the Pain of Others bristles with a sense of commitment - to seeing the world as it is, to worrying about the ways it is represented, even to making some gesture in the direction of changing it... the performance is thrilling to witness." ( The New York Times Magazine)
"A timely meditation on politics and ethics.... Sontag's insight and erudition are profound." ( The Atlanta Journal-Constitution)
"A fiercely challenging book.... immensely thought-provoking." ( The Christian Science Monitor)

Twenty-five years after her classic On Photography, Susan Sontag returned here to the subject of visual representations of war and violence in our culture. How does the spectacle of the sufferings of others (via television or newsprint) affect us? Are viewers inured - or incited - to violence by the depiction of cruelty?

In Regarding the Pain of Others, Susan Sontag takes a fresh look at the representation of atrocity - from Goya's The Disasters of War to photographs of the American Civil War, lynchings of Blacks in the South, and the Nazi death camps, and to more contemporary horrific images of Bosnia, Sierra Leone, Rwanda, Israel, and Palestine, as well as New York City on September 11, 2001.

Sontag once again changes the way we think about the uses and meanings of images in our world, and offers an important reflection about how war itself is waged (and understood) in our time.

Regarding the Pain of Othersに寄せられたリスナーの声

The recording sounded like it was playing at double speed, but slowing down the play time had it dragging and catching. It's really hard to listen to such serious (and great) content when it sounds like it's being read by the chipmunks. I would recommend against buying this audiobook.

As someone else wrote, this audiobook is trash if listened at "normal speed" I had to listen to it at 0.8x and it surprisingly worked marvels. The story is really good, however it is not the kind of literature I enjoy.

Many worthwhile thoughts are presented here but nothing particularly original. Sontag presents a somewhat obvious and cynical case for our relationship with war and war photography; and how it distorts, fictionalizes, romanticizes and detaches us from the suffering of others. The tired implication of war belonging solely in the domain of men and boys is almost laughable at times. But it's short and well written.

The reading was way too fast, not pleasant

Intersting, Still thinking about it. Don't know if I like it or disappointed that it felt like a mirror of history events throght a lens with no filter or a conclusion. The reading was way too fast and not pleasant.

This was a dope read. a nice juxtaposition with Bourdieu's work. Really dug her use of Ernst Junger, too.

A deeply insightful and eloquent exploration of our urge for war, violence and atrocity. Listen!

Culmination of a clear line of thought

This was key reading on my MA and it's clear to see why. It is the collection of a line of thought influenced by lots of other very important critical theories and thinkers. A must read/hear.

Updated and deepened 'On photography'

Susan Sontag updates her 1977 collection of essays "On Photography" collated from contributions to the New York Review of Books between 1973 and 1977. She revisits debates about the importance of images, the positioning of photo-journalists, the ethics of portrayal... taking account more latterly of the post 9/11 world, the omnipresent digital images engulfing us and the 24-hour news cycle. She highlights the quest for shocking images, one after the other, with which to titillate and attract viewers and advertisers, demonstrating what we lose... in depth and analysis ... and meaning and caring... as a result.

Sontag's empathy with others, dissatisfaction with the state of global and domestic politics, and concerns with the shallow commodification of news, images and insights, shine through.

What disappointed you about Regarding the Pain of Others?

I really dont understand why I can't hear any audio at all? just buffers for ages!