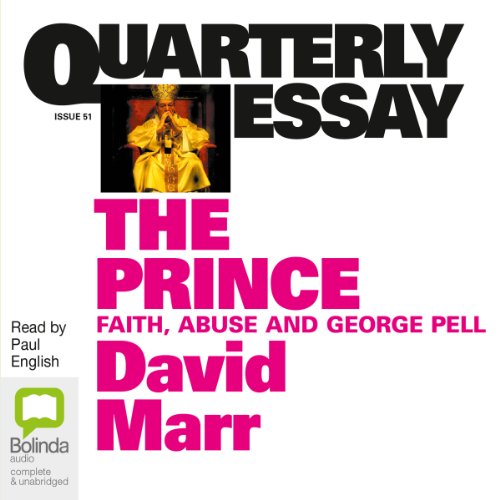 George Pell: leader of the Catholic Church in Australia, confessor to Tony Abbott. David Marr: the nation's leading biographer and investigative journalist. Cardinal George Pell is the most prominent Catholic leader in Australia at a time when the Church's handling of sexual abuse is being closely investigated. He is also the confessor of prime-minister-in-waiting Tony Abbott.

In Quarterly Essay 51, David Marr investigates the character and actions of George Pell: How does he wield his authority? How did he rise to prominence? How has he handled abuse claims in the past? What is the source of his authority? How deep does his political influence go?

This will be a news breaking and definitive portrait of Pell, at a time of maximum tension and scrutiny for both him and the church. Following up the explosive Political Animal, Marr's essay is certain to be one of the most discussed pieces of writing of the year.

Would you listen to Quarterly Essay 51: The Prince: Faith, Abuse & George Pell again? Why?

I have already listened to it a few times and could do so again. There is a great deal to ponder on in this slim but beautifully written and expertly researched volume.

It's been thoroughly researched and intelligently crafted. It made me very angry but I expected that. It was very illuminating to read. I now have a much better grasp of the extent of the Catholic Church's criminal indifference to the sex abuse scandal that has decimated their church. Pell was instrumental in helping to orchestrate the church's policy in this regard. His arrogance, narcissism and straight out callousness when it came to the children who were suffering is particularly galling.

Fantastic read! The story was horrifying and sad in many places, but a must read that is as engaging as it is devastating.