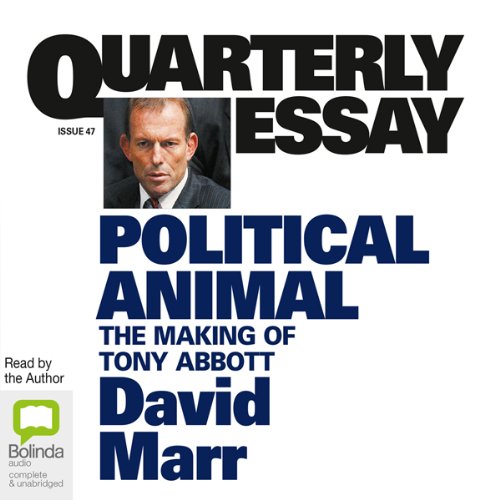 In Quarterly Essay 47, David Marr goes beyond the clichés - Dr No, mad monk, gaffe-prone, budgie-smuggling gym junkie - to look at the man as he is and reveal what kind of prime minister he might be.

This is a unique portrait of a unique politician. Marr shows Abbott as part reactionary and part pragmatist, part fighter and part charmer, deeply religious and deeply political. But is Abbott a figure from the past or a leader for the future?

Following the explosive Power Trip: The Political Journey of Kevin Rudd, this is certain to be the most discussed political writing of the year.

A compelling biography of a reprehensible man

Marr has written an engrossing political biography of one of my least-favourite public figures. I didn't know many of the details from earlier in Abbott's life, like the child he and his girlfriend gave up for adoption, or his university crusade to crush student unions, or his unabashed, explicit homophobia during those university days, so my mouth was frequently agape at learning another horrific detail.

Marr did take one cheap shot which annoyed me, at Abbott's propensity for cycling lycra and budgie smugglers, culminating in a barely-veiled joke about the size of his penis. I think dick-measuring should be beneath the scope of a quarterly essay, and I'm furthermore generally irritated by the popular ridicule of this aspect of Abbott's persona. The fact that he is comfortable with (even, god forbid, proud of) his body is in my opinion the least objectionable thing about him, and the fact that people fixated on it just shows the discomfort society holds for body positivity. Anyway, I know this shouldn't be the main takeaway, and I've probably already written too much about it, but it's something that has long irked me. That, and when people tore into him for biting that raw onion, which I always thought was clearly a joke on his part and was pretty funny.

The one most alarming pattern that became clear to me from this essay is that nothing seems to enrage and galvanise Abbott more than being beaten by a woman. This is what provoked the incident where he punched the wall beside his female opponent's head in his student politics days, and this is what presaged his relentless opposition to the Gillard government, which ravaged the Australian public's faith in politics and made the formerly bipartisan policy of pricing carbon emissions into a political third rail (most gallingly, Marr suggests that Abbott's reasons for throwing climate policy under the bus were entirely expedient, and that he had no particular personal conviction on the issue). Now that Abbott has been toppled from his former seat by Zali Steggall, I shudder to imagine what future plans he might have. Though he presently seems quarantined to a relatively safe position kissing up to defence contractors at the Australian War Memorial, the threat that he may be plotting some manner of comeback ever looms.