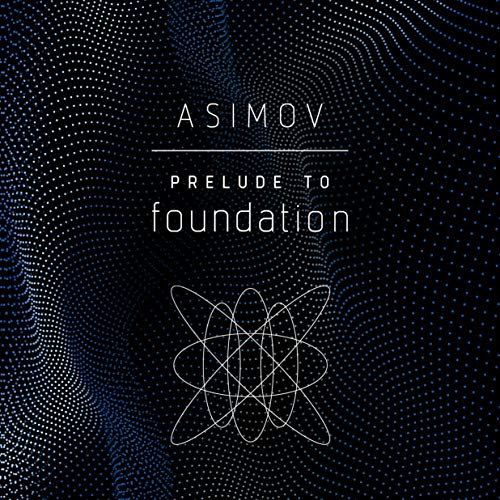 This daring story of humanity’s future introduces one of the great masterworks of science fiction: the Foundation novels of Isaac Asimov. Unsurpassed for their unique blend of nonstop action, bold ideas, and extensive world-building, they chronicle the struggle of a courageous group of people to save civilization from a relentless tide of darkness and violence - beginning with one exceptional man.

It is the year 12,020 GE and Emperor Cleon I sits uneasily on the Imperial throne of Trantor. Here in the great multidomed capital of the Galactic Empire, 40 billion people have created a civilization of unimaginable technological and cultural complexity. Yet Cleon knows there are those who would see him fall - those whom he would destroy if only he could read the future.

Hari Seldon has come to Trantor to deliver his paper on psychohistory, his remarkable theory of prediction. Little does the young Outworld mathematician know that he has already sealed his fate and the fate of humanity. For Hari possesses the prophetic power that makes him the most wanted man in the Empire...the man who holds the key to the future - an apocalyptic power to be known forever after as the Foundation.

Trantor, capital of a galactic empire!

In the 1950’s and 1960’s the “big three” of Science Fiction were Isaac Asimov, Arthur C Clarke and Robert Heinlein, all three are required reading for any real fan of the genre.

As with almost all writing from these periods, some of the technologies presented are to a certain point outdated. It is easy for us now to consider the lack of smart phones and the internet bit of an oversight but it does not affect overall enjoyment of the story and the remainder of the technology is advanced enough to be well beyond us today.

While "Prelude to Foundation" discusses events on a huge galactic scale it really focuses on the life of one man, Hari Seldon and his quest to develop the science of “Psychohistory” which will, when perfected, predict the future of large scale events surrounding societies and their governmental structures, such as a collapse of a galactic empire. It takes place on the crowded forty billion inhabitant, capital planet of a galaxy wide empire called “Trantor” which is divided into zones that blanket the entire planet.

The novel starts out with Hari arriving on Trantor for the first time to present a paper on his yet undeveloped "Psychohistory" to a mathematics symposium. As the book proceeds it leads you through an exploration of the technology, government and various social structures of Trantor, all of which serve to provide the foundation (sorry) for Hari’s later development of Psychohistory.

Do not expect a space opera with new excitement and thrills at every turn; this is not that type story. On the other hand, do not think I am saying "Prelude to Foundation" is in any way boring, the novel is a delight to listen to. Throughout the adventure it keeps you thinking about Trantor, the societies involved and the interesting storyline. The book is direct, to the point without a lot of useless meandering and moves not at a rapid but rather a nice comfortable pace.

When finished, you will be eager to continue the journey to see if Hari can complete his Psychohistory project, which is so important for the future of humanity.

How was the narration? Well, it is narrated by Scott Brick, need I say more!

Perhaps it's a result of the writing style of Isaac Asimov, but this reading eventually got on my nerves. There was too much forceful, dramatic pronunciation, and not enough variety and modulation in tone. I was left feeling that there was one main character in the book: that of Scott Brick, the narrator. More nuance and colour would have made it more enjoyable.

There are some elements of this book that are good, but a lot of drawbacks.Part of my disappointment comes from the fact that I loved the original Foundation Trilogy. That was Asimov at his finest - a sweeping space opera with fascinating ideas, in a galaxy all of its own. His subsequent books for the series, both subsequent (Foundation's Edge and Foundation and Earth) and now this prequel (Prelude to Foundation) have not lived up to the first three, or even come close.So, what is wrong with this book? First, it delves once again into Seldon's obsession with linking his series about robots with the Foundation series and it does not really work. It feels forced and ruins much of the original mystery of how the empire was formed for no good reason. Second, nothing much happens in the book and much of the plot is meandering and feels more like an anthropological tour than a story. When the end comes, it is surprising because little if anything that has happened really explains how the main actors achieve what they are able to do. Third, Asimov's later years obsession with sex and sexual innuendos (mercifully absent in the original Foundation Trilogy, but present in the two follow on books) stands out in this book and it's both distracting and annoying. So, what is right with the book? Well, the plot twist at the end is reminiscent of the better plot twists in Seldon's original trilogy, albeit a bit less profound. There are also some pretty effectively written descriptions of the various peoples that Seldon encounters.

Less emphasis on tying together Asimov's different series for seemingly no reason. More of a story arc where things happen on a macro, space opera level, and less on micro events that have little or no macro impact upon the plot.

Have you listened to any of Scott Brick’s other performances before? How does this one compare?

Did Prelude to Foundation inspire you to do anything?

Yes, it inspired me to pretend that Asimov finished the Foundation stories after his trilogy and forget all of the later books ever existed.

It's not a bad story, it's just not a particularly good one. There is little offensive, per se, it's just not the quality that I would have expected from Asimov.

Great Start to a Great Series

Where does Prelude to Foundation rank among all the audiobooks you’ve listened to so far?

Easily one of my favourites.

What was one of the most memorable moments of Prelude to Foundation?

Parts I can't mention in order to avoid spoiling the book for others who haven't read/listened to this book. I will say there are some moments of surprise that I loved.

I don't have one particular favourite scene but I loved diving into the world of the empire and following Harry and Dors around. The different worlds and sectors made the book exciting and has now lead me to listen to all the books in this (The Foundation) series.

I've listened to the books in chronological order of the The Foundation series universe and this being the first I listened to really got me interested in the whole series.

This for me was one of the best books in the series and I found subsequent books in this series mixed with some as good as this story and some difficult to stayed interested in.

Overall I love the entire Foundation series and am currently finishing off the last book.

What disappointed you about Prelude to Foundation?

Plain and simple, there is not story here. Instead of clever plot twists and surprises, you get one straight-forward, predictable read, without the slightest interesting story until the final 30 pages of the book. The last 30 pages contain several large, ingenious surprises. Problem is, none of the previous story was needed to justify the final surprises.

In the first five books, we have a genius of a storyline with great suspense. In this book, no suspense to speak of. Someone gets left atop a rooftop and almost freezes to death, then someone complains that they have to wear a bald wig on a planet, then someone gets in a knife fight, and really nothing enlightening happens along the way.

I suggest you read the final 30-50 pages and call it a day. Trust a fan of the first five books, the high ratings this book is receiving would NOT have been provided had this been the first book in the Foundation series. There's no story here.

Caveat, The narrator did a Fantastic job.

a weak storytelling effort by Asimov

like many other Foundation fans I was drawn into this prequel. it starts well, but then staggers the rest of the way. most of the big surprises can be easily guessed

No... the Foundation series is "just okay," in my opinion. The earlier books (written earlier) were interesting primarily because of their examination of social mores and structures. None is what I'd been expecting from a "science fiction" classic. This one is obviously written by an author more experienced and shaped by fans' desires for "a normal novel," and it's not a particularly interesting one.

What could Isaac Asimov have done to make this a more enjoyable book for you?

Not write it... the "prequel" thing doesn't work.

Have you listened to any of Scott Brick’s other performances before? How does this one compare?

As good as any; he's a great narrator.

Could you see Prelude to Foundation being made into a movie or a TV series? Who should the stars be?

Good voice work, but the story is ultimately fairly predictable and didn't really amount to much. I have higher hopes for the succeeding books.

This is pretty awful

What would have made Prelude to Foundation better?

I first read the Foundation trilogy in the 60's. I hoped this would be a good new addition. Unfortunately, it is boring, tedious and pretty much a hack job by Asimov. Who knew Hari Seldon was such a whiny bitch! Amazing...

I've heard a different version of this but this is the better. Excellent read. The story and performance are both superior.