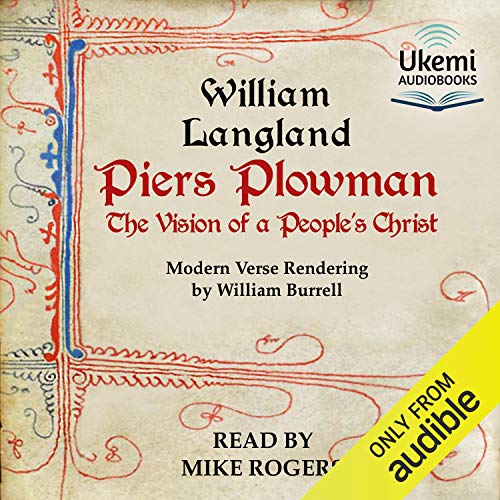 Probably written in the latter half of the 14th century in the South-West-Midlands dialect, Piers Plowman is a remarkable example of allegorical, alliterative verse that conveyed, for the first time ever, the authentic voice, spirit and character of the ordinary people of England.

Very little is known about William Langland, the presumed author, but it is very much a product of the medieval mind combining Christian belief with dramatic poetry in a drama of identity. While the characters are less rounded, more-two dimensional than the fully developed protagonists of Chaucer’s Canterbury Tales, they comprise an illuminating sample of the English type: the ‘every-men’ and women of their time, from the plowman to the wastrel, the merchant to the priest, the high-born lady to the harlot.

No-one is spared. Opening with a dream, or vision, a structural device made popular by the 13th-century French poet Guillaume de Loris in his Roman de la Rose and used most successfully by Dante in his Divine Comedy, Langland proceeds to explore his theme: namely, the world and the path the true Christian must follow through it to achieve salvation in life.

In the course of the events which he goes on to describe, in a series of visions and successive awakenings, he paints a wonderfully detailed and highly critical picture of the corruption and abuses in the church and in society.

Concepts become characters in the drama of life; Reason, Conscience, Recompense, Wealth, Will, Desire, “All the world’s weal, all the world’s woe,” are examined metaphorically in the context of the changing realities of the medieval economy.

Piers Plowman embodies the Will. He is the good Christian who carries Jesus Christ in his heart, a good person who works hard for the benefit of the community and his own soul. His attitudes and actions are in counterpoint to those of a whole range of less edifying characters: ne’er-do-wells, layabouts, good-for-nothings, lollers and grafters, corrupt clergy, friars, pardoners, summoners, beer-watering publicans, brothel keepers, liars, robbers and cheats.

The poem is remarkable for the way in which it comprises a range of modes and genres, from sermonising and psychomachia to biblical history and satires on social status, flowing effortlessly, almost seamlessly, from one to the other.

It holds the mirror up to medieval society and it does not flatter. It is by turns both prophetic and apocalyptic, reflecting multiple facets of the Christian imagination. The series of visions revealed to the listener can be seen as didactic processes, or steps on the spiritual journey to salvation and include the shriving of the Seven Deadly Sins and the Vision of Antichrist.

This version also contains a marvellously vivid description of the Harrowing of Hell, which prefigures the infernal imagery recreated 300 years later in John Milton’s epic poem, Paradise Lost. This rendering of Piers Plowman in modern English by Arthur Burrell comes to life as never before in this lively, nuanced recording performed by Mike Rogers.

Mike Rogers is on a tear! Can't wait for his next

reading. I am loving these new gluts of long unavailable audio. Thanks Ukemi! Deluezesometime?ThomBrowne?Fanon?<3thanks!