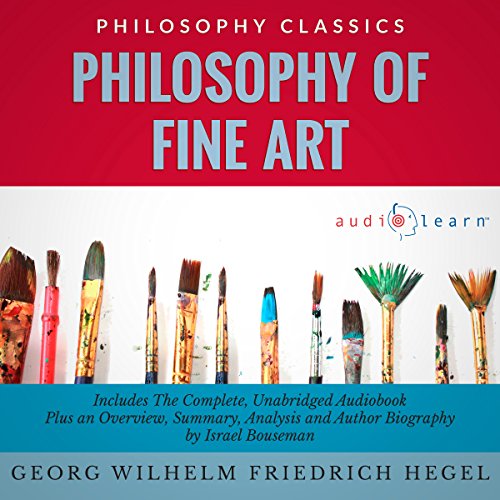 Georg Wilhelm Friedrich Hegel's Aesthetics, or Philosophy of Fine Art, is part of a rich German aesthetic tradition that stretches from the middle of the 18th century into the modern era. Hegel wrote this work early in the German exploration of aesthetics, and it served as a foundation piece for the philosophies of all who followed him. Hegel, with Aesthetics and other works, had a profound impact on the philosophies of Nietzsche, Heidegger, and Adorno. In this work, he explores the nature of beauty and the historical development of art. Hegel addresses each style of art in turn, considering architecture, sculpture, painting, music, and poetry in detail. He also offers distinct and in-depth analyses of Egyptian art, Greek sculpture, and both ancient and modern tragedy. Philosophy of Fine Art is regarded as one of the greatest aesthetic theories produced since Aristotle's Poetics.

The AudioLearn version of Hegel's Philosophy of Fine Art is preceded by a chapter-by-chapter summary that details the themes and perspectives addressed in the main work. The summary also provides an exploration of the life of the author and the background of the piece. Also included are an overview, a synopsis, and an analysis of the work. The summary is concluded by an examination of the historical context and social impact of the piece and a brief look at the criticisms associated with it. Philosophy of Fine Art is a key work of aesthetic philosophy and an essential text for students of philosophy and art as well as for anyone interested in the nature of aesthetics.

Not made for audiobook

The lesson I took from this book is to not listen to philosophy audiobooks, especially Hegel's philosophy.

Gardiner is an uncomprehending bimbo.

You’d never wish to hear a Stepford wife read philosophy out loud, but that’s what you have in this utterly robotic performance.

The pace never alters. Her vocal modulations are all performed from a programmed menu rather than from any apparent sensitivity to the information.