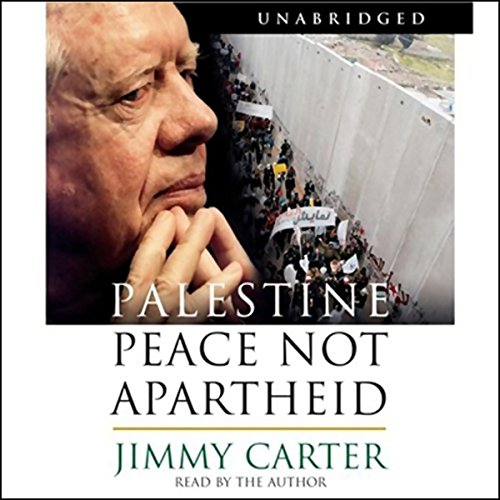 Following his #1 New York Times best seller Our Endangered Values, the former president, winner of the Nobel Peace Prize, offers an assessment of what must be done to bring permanent peace to Israel, with dignity and justice for Palestine.

President Carter, who was able to negotiate peace between Israel and Egypt, has remained deeply involved in Middle East affairs since leaving the White House. He has stayed in touch with the major players from all sides in the conflict and has made numerous trips to the Holy Land, most recently as an observer of the Palestinian elections in 2005 and 2006.

In this book, President Carter shares his intimate knowledge of the history of the Middle East and his personal experiences with the principal actors, and he addresses sensitive political issues many American officials avoid. Pulling no punches, Carter prescribes steps that must be taken for the two states to share the Holy Land without a system of apartheid or the constant fear of terrorism.

The general parameters of a long-term, two-state agreement are well known, the president writes. There will be no substantive and permanent peace for any peoples in this troubled region as long as Israel is violating key U.N. resolutions, official American policy, and the international "road map" for peace by occupying Arab lands and oppressing the Palestinians.

Palestine: Peace Not Apartheid is a challenging, provocative, and courageous work.

This is an excellent book with a great perspective from a man of peace. I do recommend this book to anyone who's interested in US foreign-policy and the Arab Israeli conflict specifically the Israeli Palestinian conflict. I do recommend two other books: the Arabs, which gives an excellent history of the Arabs with lots of details. I also recommend: the Israel lobby and US FOREIGN POLICY.

I'm thankful the audio version of this book is available since it's a required text for my Middle East class at Spelman College, and I have personal difficulty reading text alone.
The content gave a great amount of historical information and was not too detailed nor too vague. Many places referenced to external sources instead of leaving gaps forcing contextual interpretation or having lengthy explanations. Name dropping and reference to actual meetings between President Carter and numerous leaders in that corner of the world made his input especially more trusted and his relationship with the issue more obvious. My only complaint is that the book is concluded as of maybe 2008 and since then, much has occurred and I'd love an update from Carter's position as a follow up to this book.
as for his audio reading of the book, some words were muffled and changed altogether, but it wasn't an obstacle in completing the book. also, a reading of the Annexes would be nice.

A non biased look at one of the Middle East crisis

A well researched informative book for anyone curios about the actual events taking place in Palestine. Nice to hear the account of someone who has actually BEEN there and involved in the negotiations for decades...

A Story Not Told in the US

I am not prone to praising liberals, however President Carter is clearly a man of substance, character and integrity. You do not have to agree with his politics to appreciate the fortitude of the man that tells the truth as he sees it in the face of populist dogma. The man has taken personal risk in sharing a view of the middle east conflict that is just not told in the mainstream US media. President Carter, akin to Thomas Sowell and Thomas Friedman, has the rare ability to boil down the facts and present them in a fair and even handed manner that is understandable to the layman.
My mother always shared with me that it takes two to have an arguement. Yet the popular media in the US typically shows only one side of the Israeli- Palestinian conflict. I have always wondered why, given the news that I read and see on TV, so many in Europe take issue with the Israeli government. I know have that understanding.
Just to be clear, the violence against innocents perpetrated by the Palestinians is unacceptable under any circumstances. However, it becomes much more understandable (although unacceptable) as the only tool available to an oppressed, occupied and impotent people.
Now I see more clearly that there is plenty of blame to go around on both sides. Further, there is a glimmer of hope that peace is available if both sides want it bad enough. President Carter makes it clear that the Israeli electorate wants it, but is held captive by the right wing which wields political power in excess of their actual numbers.
As the oppressor and the clear power in the region, it is up to Israel to make the first move and get back to the negotiated Camp David accords. This will not happen until the Israeli majority excises the power of the right wing that is holding their government and, thus, the entire region captive.
If the US people, through our government, put pressure on the Israeli government to honor their commitments, peace could blossom. There is hope.

Listening to President Carter insight on the Middle East was good. I found his thought process to be well balanced and rationale.

I have great respect for Jimmy Carter for his role in bringing about the first peace treaty between Arabs and Israelis, they way he describes the existing problem and context of how they happened, helped me put of the news that I hear in perspective. .

A refreshingly open discussion of the Israeli-Palestinian conflict, discussed by someone intimately involved in the pursuit of peace.

Good, but nothing new

If you could sum up Palestine in three words, what would they be?

Which character – as performed by Jimmy Carter – was your favorite?

The book was phenomenal coming from President Carter itself. However, as someone who studies the Arab/Israeli conflict, I would honestly say nothing new came from this book. If you've got little to no background to the topic, definitely look into it - great read for understanding of the conflict.

Good to get an more in-depth insight of Palestine

Good time, a bit long winded for some topics or some sub-topics more like.

Knew where it was going and the entire book is based around a conclusion or suggestions of how to move forward.

Could you see Palestine being made into a movie or a TV series? Who should the stars be?

Jimmy Carter is a great man for our world now

What made the experience of listening to Palestine the most enjoyable?

Because J Carter narrated his own book

What other book might you compare Palestine to and why?

Some of Thomas Friedman bks

Chapter 4 when he made cultures more understandable.