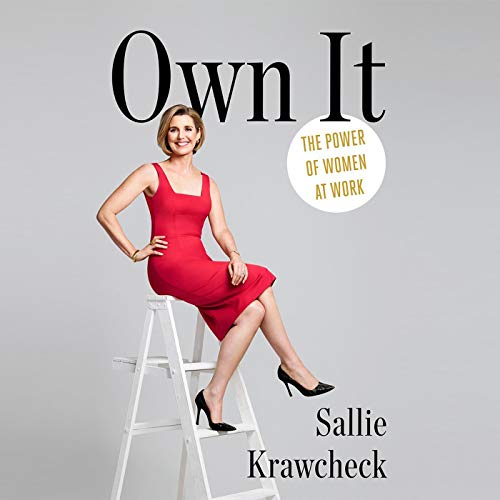 "As Krawcheck shows, women are uniquely positioned to succeed by tapping into [the] skills they already possess. Own It is a manual for how women can both thrive and accelerate these changes - which will benefit both men and women". (Arianna Huffington, founder and CEO of Thrive Global and author of Thrive)
"This book fills me with hope that our next generation of young women will grow up believing they are brave and capable of changing the world." (Reshma Saujani, founder and CEO, Girls Who Code)
"In this powerful, honest, and yet intensely optimistic book, [Sallie Krawcheck] shows why women today have more options than ever, and how we can seize them by bringing our true selves to work." (Karen Finerman, CEO of Metropolitan Capital Advisors)

A new kind of career playbook for a new era of feminism, offering women a new set of rules for professional success: one that plays to their strengths and builds on the power they already have.

Weren't women supposed to have "arrived"? Perhaps with the nation's first female president, equal pay on the horizon, true diversity in the workplace to come thereafter? Or at least the end of "fat shaming" and "locker room talk"?

Well, we aren't quite there yet. But does that mean that progress for women in business has come to a screeching halt? It's true that the old rules didn't get us as far as we hoped. But we can go the distance, and we can close the gaps that still exist. We just need a new way.

In fact there are many reasons to be optimistic about the future, says former Wall Street powerhouse-turned-entrepreneur Sallie Krawcheck. That's because the business world is changing fast - driven largely by technology - and it's changing in ways that give us more power and opportunities than ever, and even more than we yet realize.

Success for professional women will no longer be about trying to compete at the men's version of the game, she says. And it will no longer be about contorting ourselves to men's expectations of how powerful people behave. Instead it's about embracing and investing in our innate strengths as women - and bringing them proudly and unapologetically to work.

Here Krawcheck draws on her experiences at the highest levels of business, both as one of the few women at the top rungs of the biggest boy's club in the world and as an entrepreneur, to show women how to seize this seismic shift in power to take their careers to the next level.

This change is real, and it's coming fast. It's time to own it.

An inspiration and still practical

A colleague recommended that I read /listen to this book. So glad she did. It is wonderfully honest, inspiring and practical. So many great nuggets of our strength, power and influence as woman, several of which I had never heard. The best piece of advice, in my opinion, is the chapter on investing. Just wow!

A Sales Pitch For Ellevest

I got this book looking for a more down to earth realistic point of view as I start my career. And as much as I wanted to like it and be inspired the whole thing just felt off.

There are a few inspiring points in this book and some stories from the authors life that are relatable. But every chapter contains at least a small sales pitch for investing in the author's company.

There is one main point that is repeated in this book ad nauseam. Women add diversity to the workspace so don't feel bad for not "fitting in" in an office full of men. You bring something unique that the company needs to succeed so be yourself and follow your instincts.

The writer makes clear she wants to buck the stereotypes of women in business books but tends to lean on them heavily to support herself being a "stronger businesswoman."

I don't recommend it.

Great message! I am fresh out of college and a little unsure of my path as a future professional woman and this book really helped.
Im so inspired now to go and actually try out advice from this book. Even though this is a book geared towards women, it’s still refreshing and not over powering with feminism rhetoric. Read the book if you are a woman who has never felt right with the common advice on how to “win” in the professional work environment by acting like a man. You’ll see what I mean!
Yes, as some other reviews have said that the book repeatedly mentions Sallie’s company but that’s because her company (Ellevest) is amazing and really does make women comfortable when investing which is SUPER important. If you don’t think investing your money is important, then you NEED this book even more than you know.

A must read for every woman

Not to be missed for any woman who wants to take charge of her life and career.

This is definitely one of the better books on women in business I've heard/read. Sometimes when I'm listening to these types of audiobooks, I can get distracted and feel like I didn't miss anything, but with this one, I consciously pushed pause when I found myself not paying attention. To me, that's a sign I'm fully engaged in learning from the author!

I love Sallie and this book! I’d say it’s an important book to read for men and women. My only complaint is it sometimes feels like she’s just trying to sell you on Ellevest. But other than that really interesting.

Loved it from start to finish!

One of the best business books I've read, so much valuable info told in such an intriguing way.

Is she selling her book or her business?

The book reads like an infomercial for her companies, Ellevest and Ellevate. She lists how the world is unfair for women then uses it to sell why women need her company. It's a conflict of interest because it makes me question if a woman like her made it to the top of Wall Street without Ellevest, then why can't other women make it without Ellevest? Some people sell victimhood in order to make money as the anecdote. I liked some of her personal stories, but didn't learn much.

What a wonderful insightful boom that needs to read by every female and male. Saving for my kids to read before they leave for college. Going to grab her other books.

Girl power in the world of finance

This book is inspirational, educational, fun, resourceful and energizing! I enjoyed every second of it!