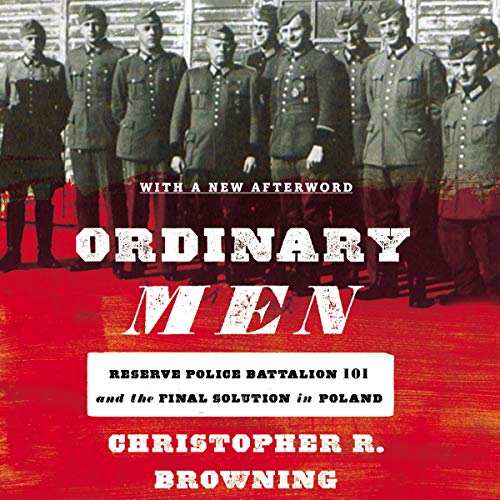 “A remarkable - and singularly chilling - glimpse of human behavior...This meticulously researched book...represents a major contribution to the literature of the Holocaust." (Newsweek)

Now available in audio for the first time, Christopher R. Browning’s shocking account of how a unit of average middle-aged Germans became the cold-blooded murderers of tens of thousands of Jews - now with a new afterword and additional photographs.

Ordinary Men is the true story of Reserve Police Battalion 101 of the German Order Police, which was responsible for mass shootings as well as round-ups of Jewish people for deportation to Nazi death camps in Poland in 1942. Browning argues that most of the men of RPB 101 were not fanatical Nazis but, rather, ordinary middle-aged, working-class men who committed these atrocities out of a mixture of motives, including the group dynamics of conformity, deference to authority, role adaptation, and the altering of moral norms to justify their actions.

Very quickly three groups emerged within the battalion: a core of eager killers, a plurality who carried out their duties reliably but without initiative, and a small minority who evaded participation in the acts of killing without diminishing the murderous efficiency of the battalion whatsoever. While this book discusses a specific Reserve Unit during WWII, the general argument Browning makes is that most people succumb to the pressures of a group setting and commit actions they would never do of their own volition.

Ordinary Men is a powerful, chilling, and important work with themes and arguments that continue to resonate today.

could've done without the afterword...

The story is excellent and strong but could've done without the afterword of the author bashing his literary rivals... realistically 2 hours of the audiobook was ranting

Most people cannot fathom how the Holocaust came to be. Well... here it is. A vast array of factors - that would have pushed most people to do exactly what the men of these times did - influenced the individual participation of the people involved in the mass murder of other humans. This book is not for the light of heart, but I believe it is something everyone should read. The details in the book suffice to give you an idea of what happened, where it happened, and most importantly, why it happened.

90% of the book (9 hrs) is disjointed descriptions of various massacres. The part about “ordinary men” is only about an hour long and at the very end.

Ok book minus the afterword

The reason I’m giving this book and single star and requesting a refund isn’t so much the main content, even though it was disappointing at best. Rather my negative review is earned through the 2.5 hour afterward the author chose to include. Instead of being new insight or information, this addition is simply hours of the author whining that someone disagreed with their conclusions. Perhaps the author is unfamiliar with the world, but differences of opinions are commonplace and to just continually cry about how you are right and this other person was wrong was very off putting.

Should be required reading

This should be required reading in any High School History class. Pure and simple. Too many have such a naive view on how man could enact such atrocities on his fellow man.

This is a must listen.. it’s not enjoyable, at least not in the traditional sense of the word, however it delves deep into the how and why ordinary men could commit such atrocious acts against humanity. The narrator is perfect, in my opinion, for the macabre section of the book you have to get through.

Don’t believe that you or someone you know could become a mass killer? Read this and realize the push required is but a breath.

a must read on human behavior

a must read for anyone interested in how "normal" people can be lead to commit acts of atrocities. Its scary how propaganda now is turning back into demonizing the other, both left and right are edging toward dehumanization and lack of individual responsibility in crimes.

Argues convincingly that normal people are capable of terrible things. Better than Goldhagen. Read this.

struggled to finish, too much info and topics, people already know the Nazis were monsters. only new info was the psychology aspect. how some dealt forced etc etc

Not an easy read but a very important one

I came to this book on the recommendation of several renowned psychologists. Prepare to cast off the comfort blanket of thinking this could never happen to me or anyone I know.

This a really important book. its by no means easy listening. but I have no regrets. I found it really interesting and engaging throughout, well read and written. like all good history I am left wanting to read more around this subject.

An incredibly vivid and shocking tale of how easily corrupted we can be. This book is a must read

should be to taught and referenced in all schools it explains how everyone whether involved directly or indirectly, individuals can and will follow a narrative or ideology even if it is evil.

A study on history and human behavior

Listening to this audiobook was a great experience for me. We can all learn from history and humanity's past mistakes.What turned these ordinary men into quite frankly serial killers? What difference do these ordinary men have from me? It seems easy to judge people with hindsight but trying to put myself in their shoes their behaviour seems ...human. Not inexcusable of course. Just human. This is a well written book and a well narrated audiobook and I don't think I would have read this book but in audio form is simply more accessible for me.

I came here hoping to learn how men were able to become monsters, and have left with new knowledge of the holocaust that wasn't taught in school , that the gas chambers were only a part of the atrocities enacted on the jews. what mankind is capable of is truly shocking! this is a fascinating title, and I can wholeheartedly recommend it anyone , looking for a little perspective

the book is memorable and interesting. although some of the insights perhaps could have been gotten to faster and with less repetition of atrocity description.

A truly staggering way to see people act, think and make outstanding choices. I enjoyed the stories the insights. The book itself is amazing but the afterword is not so much.

This work is an incredible look into human depravity. however it's heavy on history/ politics and can be hard to follow at times.