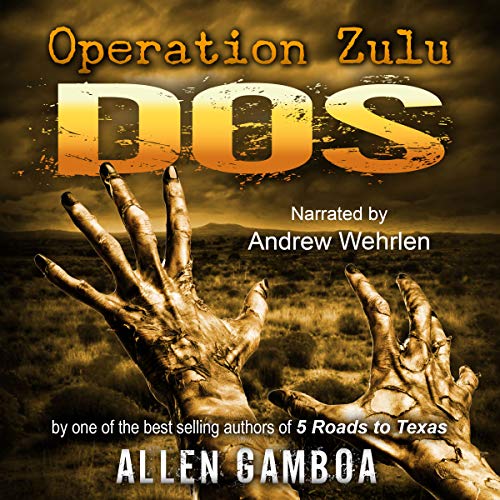 Sergeant Lin Morgan and Rollie Hale lead a team of soldiers on a mission to capture the head of a Mexican drug cartel. It will be anything but a cakewalk. The soldiers must battle cartel thugs, government conspiracies, and ravenous zombies to survive.

And cutting a path through it all is the evil Mister Black.

I really enjoyed Dead island :Operation Zulu and actually didn't realise this was the prequel till I was a ways into the story!! Because I didn't read the summary of this, I was a little lost at the start trying to figure out what was going on, but the light finally clicked in my head and I had that ahhhh moment!! lol.

The plot of this was fast paced and intense. It's basically centered around two separate stories. The first is the Mexican Cartel and the drugs they are selling. They are trying to make the drug more addicting but they don't realise that their extremely crazy scientist is experimenting with things that he shouldn't and one thing leads to another and the drug causes the dead to return .

Then we have a Special Forces team sent in to retrieve the head of the Mexican cartel for the killing of someone important. Little do they know that they are about to stumble into the beginning of the end.

I enjoyed seeing how the Zombie virus came to be and look forward to listening to the next one! The characters were all well written and developed, including the bad guys!! Mr Black was one crazy a88 dude!!! He was definitely one of the sickest and twisted guys I've read in a while. The author knows how to write zombies! He was very detailed in some of the parts, *Shudder*, and had me going eww quite a few times!!

In all, this was a great read. It's brutal and gory, but oh so good!

Andrew B. Wehrlen was amazing in this performance!! I've listened to many by him but this one really showed his strengths as a narrator because of the number of characters he had to perform. There were quite a few yet he was able to give each one their own personality and tone and it was easy to follow who was talking. His inflections and cadences really brought the story to life.

Can be read without reading the other entries first

This is more a prequel and as such it’s possible to start with this one. But I always think it’s best to go with publication history so that you can see how the author evolves and he becomes a more skilled writer

One Man's Greed which starts the end of the world.

So This is my honest review for a gifted copy during the Covid-19 experience. <3 Thanks for giving me the chance to read said Book @ Allen Gamboa.
-Over all
You're basically thrusted into the beginnings of how the plague/zombie virus is started. This all because of Mr. Black the Evil greedy Antagonist and a Bastard he simply is. If you've read Book 1 Dead Island Operation Zulu then you aint no stranger with Mr. Black. forgive me also if made a mistake with the name lol But this rich dipshit is an ass with a name basically i deem worthwhile. Simplistic and very descriptive to the core. Not EVIL EVIL but just enough to pass under the radar as someone who deems himself above all.
Some of the characters in the mix are i believe a few the characters in book one but dont hold me to that as i feel a bit that it may be so. But that aside it aint no government conspiracy or foreign Gov with their secret Bio weapon. It's all Mr. Blacks endeavor to be rich. With that said read the book/or listen to the Audio book for you to really sink your teeth into. NO more spoilers if there are any.

Performance wise: XD i find it a little funny how the Narrator pushes the American Latino speak during the session XD. I don't think its a poor attempt but rather it's just a it funny for me as someone who lives in central latin America hearing an english speaker tryna mimic an Us/Mexican accent. I find it epic and funny lmao and it does keep me going through lol.

Story wise: It's a whole new way to starting off the supposed zombie outbreak or how its created lol I suppose its random imo but its different. It does take you a bit off tangent though. Majority of the story is basically a blackops mission to collect not an asset but rather a high prioriity target. All in a days work for an under the table snatch and grab i guess. So you have less zombies and this is more to the middle or near the last 2-3 hours where you start seeing more and more of the outbreak occuring all due to the stupidity of the scientist involved and i would think Mr. Black's attempt to give 0 F***s about what his merchandise is doing.

Though this for me wasn't much of a big exciting explosive "Beginning" It passes for me as yeah ok that happened and i understand where things came from. I will say tho... Listening to a momma's boy's attempt at tryna get momma's approval has been one of the single most enjoyable times ever lmao. "MAMA!!!!!!!!!!!!!" lmao

My rating compared to book 1 is 8/10 i personally believe this should have been a bit more umff into the mix . This felt more of Cartel story than well zombie related. <3 not hating though. Just needed more screams/real hardcore firefights and i guess more gusto. Give it a listen/read. Character development is great imo. Narator did his job and Author brought a new outlook to what we as humans can do or cause due to our own whims.

I enjoyed listening to this book. The narrator did an excellent job. It will be interesting see hear how the story unfolds.

I thought that this was part 2, but it's actually a prequel. Very entertaining story that will make you laugh out loud on several occasions.

I thoroughly enjoyed this book. It's one of the best zombie books I've heard for a while. The story was engrossing, lots of action and interesting characters. Good narration.

I didn’t know what to expect with this but it was really good.

The characters are believable, the story was well put together, and I LOL quite a bit.

This is NOT the typical Zombie book and I am looking forward to the next one.

loved it! hated the cliffhanger but the book and production was amazing. onto the next!

Great read to start the series!

A drug Cartel party of a lifetime,special forces trying to retrieve someone from that place and then the Zombies!Add to that the wit of Allen Gamboa and great narration by Andrew B Wehrlen and you have a good few hours to listen to.I was given this book by the narrator,author or publisher free for an honest review.

I really enjoyed this prequel, it filled in more of the back story of how the original outbreak began and the conspiracy involving Mr. Black, the politicians and the russians. It was fast paced and action packed and had me on the edge of my seat, I was hooked from the start and stayed up way too late to hear more. I really enjoyed Cross's character, and Tanya, Bailey and Nero made an interesting team, there were some great plot twists, and the narration by Andrew B. Wehrlen was really good. I received this book in exchange for my honest review.

A really good story and shows beliveable way it started. Characters come to life.. During the story.