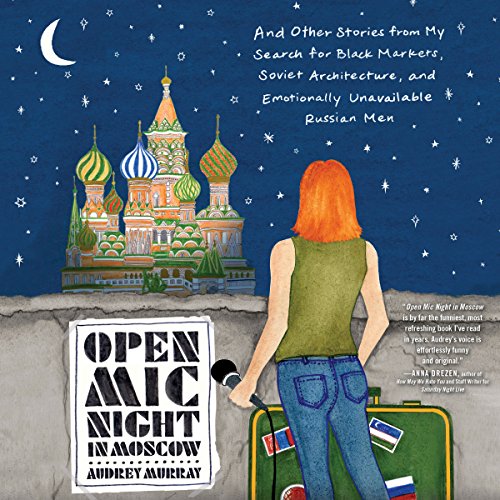 The raucous and surprisingly poignant story of a young, Russia-obsessed American writer and comedian who embarked on a solo tour of the former Soviet Republics, never imagining that it would involve kidnappers, garbage bags of money, and encounters with the weird and wonderful from Mongolia to Tajikistan.

Kazakhstan, Belarus, and Siberia are not the typical tourist destinations of a 20-something, nor the places one usually goes to eat, pray, and/or love. But the mix of imperial Russian opulence and Soviet decay, and the allure of emotionally unavailable Russian men proved strangely irresistible to comedian Audrey Murray.

At age 28, while her friends were settling into corporate jobs and serious relationships, Audrey was on a one-way flight to Kazakhstan, the first leg of a nine-month solo voyage through the former USSR. A blend of memoir and offbeat travel guide (black markets in Uzbekistan: five stars; getting kidnapped in Turkmenistan: one star) this thoughtful, hilarious catalog of a young comedian’s adventures is also a diary of her emotional discoveries about home, love, patriotism, loneliness, and independence.

Sometimes surprising, often disconcerting, and always entertaining, Open Mic Night in Moscow will inspire you to take the leap and embark on your own journey into the unknown. And, if you want to visit Chernobyl by way of an insane-asylum-themed bar in Kiev, Audrey can assure you that there’s no other guidebook out there. (She’s looked.)

Not really, but after reading this book that is the next trip on my list. I lived in China as well for a while and this book really brings everything about working there, traveling on that side of the world, and seeing these Communist or post-Communist nations and societies so well. Every second of the book was captivating and moving, I really felt like I knew the author and was a good friend traveling alongside her.
The book’s hilarious too, and has me thoroughly convinced that if I ever see an ad for one of her shows I’m definitely buying a ticket. Her deadpan interactions with many of the more annoying people she met along the way had me covering up laughter at my desk.
I have the strongest longing now, not only to see the former Soviet union, but to read anything and everything else this author has ever written. 10 out of 10

the comedy is real

Audrey Murray gives us comedy, tragedy, hope, love, and insight in this inspiring work. Her inspired writing gives one the feeling of roughing it alone in Central Asia, though with tremendous wit and intelligence. A worthwhile read, and a different perspective on life.