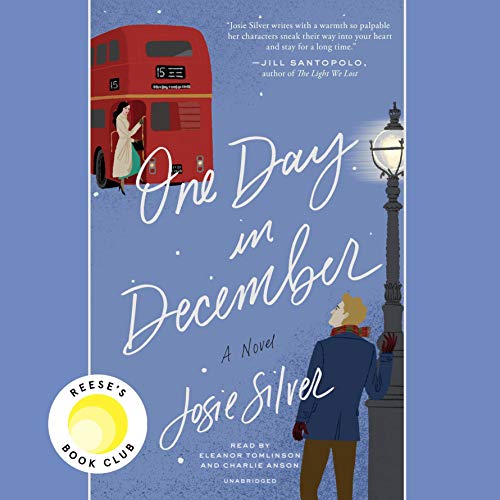 “Consider setting aside some time and prepare to be charmed as author Josie Silver takes readers on a captivating journey - where female friendship is as important as romantic love.... One Day in December is an unmistakable winner.” (USA Today)

“One Day in December is the sweetest love story. It’s gorgeous, absolutely lovely. Readers are going to love it.” (Marian Keyes)

"A must-read. In Josie Silver’s charming rom-com, Laurie experiences love at first sight through her bus window...then the car pulls away.... What follows is a decade of heartache, betrayal, and destiny.” (US Weekly)

“Josie Silver writes with a warmth so palpable her characters sneak their way into your heart and stay for a long time.” (Jill Santopolo, New York Times best-selling author of The Light We Lost, a Reese Witherspoon Book Club pick)

Laurie is pretty sure love at first sight doesn't exist anywhere but the movies. But then, through a misted-up bus window one snowy December day, she sees a man who she knows instantly is the one. Their eyes meet, there's a moment of pure magic...and then her bus drives away.

Certain they're fated to find each other again, Laurie spends a year scanning every bus stop and cafe in London for him. But she doesn't find him, not when it matters anyway. Instead they "reunite" at a Christmas party, when her best friend, Sarah, giddily introduces her new boyfriend to Laurie. It's Jack, the man from the bus. It would be.

What follows for Laurie, Sarah, and Jack is 10 years of friendship, heartbreak, missed opportunities, roads not taken, and destinies reconsidered. One Day in December is a joyous, heartwarming, and immensely moving love story to escape into and a reminder that fate takes inexplicable turns along the route to happiness.

I am no longer following Reese’s book club recommendations

This is the second book I listened to off Reese Witherspoon’s book club and it was disappointing. The story was predictable. The character Laurie was an adult equivalent of Bella in Twilight. She is nothing special yet everyone falls all over her! The author gave no explanation to why Laurie was so great. She sounds boring to me. In fact all the characters were boring and I could care less what happened to them. Also every character was too perfect and too pretty or handsome. I know it’s probably not a popular opinion either but I didn’t like the narrators. Their voices seemed a little too posh for the characters. The woman’s voice got on my nerves because she sounded like she was laughing at everything. The man’s voice was strangely too deep. Reese’s book club has had some really big duds for me. I will think twice before I take her recommendations again.

From the over the top accent to the fake crying. I hung in and finished but barely. It was a good listen at bed time. It put me right to sleep. Tried to hard, felt self righteous at times and the good girl fell for and tormented herself for the bad guy who really didn’t have much to offer. I just didn’t get the recommendation.

This was not for me... A very scattered story... I didn't love any of the characters... The reader was annoying

What am I missing?

This is one of the worst books I've listened to this year (if not the worst). I am not going to finish it because it's a serious waste of time. If you read the overview of the book, you've read the book. The main character just jabbers and jabbers on about trying to find the guy, finding the guy, obsessing over the guy etc. It's like a long stream of thought about one subject.

I love romantic comedies. This was just desperate and unrealistic and I didn’t even like the characters.

It's Not Romantic, Not Joyous, and Not for Me

I realize that I am in the minority regarding this book. But I am compelled to let others know that the description of this book as joyous, romantic, and heartwarming is very inaccurate and misleading. (Warning: spoiler alert). First, there are endless descriptions of binge drinking, of being drunk, or hangovers, of vomiting from too much alcohol. There is random casual sex. There are curse words galore. All of this strikes me as being immature both for the characters and for the writer. Second, the premise is not matched by the characters' actions. The idea is that the romantic leads feel such an instant and powerful connection and that this is supposed to be one of the great soulful loves of all time. But gee, the main hero keeps having sex with his girlfriend...oh, right, so she wouldn't be hurt. Perhaps I am old-fashioned, but that seems neither joyous nor romantic. There is so much pain that the characters have to go through...divorce, loss of friendship, depression, anxiety, and job loss...that I found the story quite depressing, actually. Ten hours honestly felt like twenty. A more accurate description would be that this is a growing up story. It is much more about young adults going through life changes as they graduate from university, start work, move away from home, get married, etc. than it is a romance. The book lacks charm. Although the end was satisfying in a "Bridget Jones" kind of way, by that time I was heartily sick of the characters and their problems. The book definitely could have been better. But also, if it were not promoted as a romantic and heartwarming holiday love story, my expectations wouldn't have been so off, and I would not have chosen this book at all.

The main character cried in every chapter. Definitely returning this one. Performance was good though.

This is the first book I ever returned!

The story was awful! It was too painful to finish. Not only was the story boring but the performances we're dry and boring

Main character falls in love simply looking at some guy through the window of a bus -- but what an AMAZING connection she knows they have!! Good grief. Even worse than the premise, which wouldn't bother me in a breezy chick lit airplane read, is the language -- heavily laced with profanity. Had to stop listening. Unsure why other reviews liked the narrators, whom I thought lackluster.

the only reason I finish this book is because for some strange reason my book club suggested is. It held my interest at the very beginning and then the whole thing fell apart into a convoluted highly predictable series of silly events.