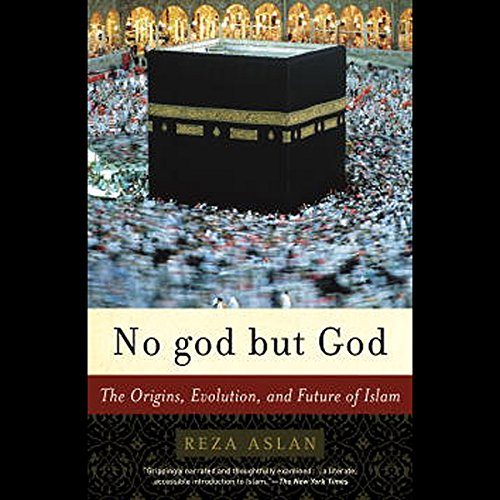 Though it is the fastest growing religion in the world, Islam remains shrouded by ignorance and fear. What is the essence of this ancient faith? Is it a religion of peace or war? How does Allah differ from the God of Jews and Christians? Can an Islamic state be founded on democratic values such as pluralism and human rights? A writer and scholar of comparative religions, Reza Aslan has earned international acclaim for the passion and clarity he has brought to these questions. In No god but God, challenging the "clash of civilizations" mentality that has distorted our view of Islam, Aslan explains this critical faith in all its complexity, beauty, and compassion.

Contrary to popular perception in the West, Islam is a religion firmly rooted in the prophetic traditions of the Jewish and Christian scriptures. Aslan begins with a vivid account of the social and religious milieu in which the Prophet Muhammad lived. The revelations that Muhammad received in Mecca and Medina, which were recorded in the Quran, became the foundation for a radically more egalitarian community, the likes of which had never been seen before.

According to Reza Aslan, we are now living in the era of "the Islamic Reformation". No god but God is a persuasive and elegantly written account of the roots of this reformation and the future of Islamic faith.

No god but God was an addictive listen - I couldn't wait to get back to it. I originally chose to listen to it after hearing a recording of Aslan speaking at Stanford, but was intrigued enough to learn more.

Overall, I very much enjoyed the text. I only knew a little bit about Islam before this book, which is partially why I chose it. This book provides a great historical overview to the religion as well as the cultures that have developed around the faith. I also appreciated the historical context because it gave me a much better picture of what is going on right now (both in the Middle East and around the world). The basic tenets of belief are also explained, as well as some cultural (though not necessarily religious) habits that tend to be popular in the Muslim world. I also was very interested in Aslan's belief that we are currently experiencing the Islamic Reformation (similar to the Christian Reformation), and was able to see the parallels. I feel like this book has given me a great start towards understanding the Muslim faith.

I only have two complaints about the audiobook. The first is the chapter on Sufism was difficult to follow as an audiobook (maybe it would be better in text). I realize that the book wouldn't have been a complete picture Islam without mentioning Sufism, but trying to cram what appears to be an incredibly complex set of beliefs into two chapters made it hard to keep up with.

My other complaint is how Aslan continuously tried to frame Islam as similar to Christianity and Judaism. I appreciated the historical similarities, but in some instances it just seemed a bit overdone. Perhaps he was using this tactic to appease to people who are against Islam as a religion, and I don't feel like I am in that camp. I understand that people, regardless of their religions, have done terrible things in the name of their religion - but that doesn't necessarily make their religion evil.

This book is an important investment of your time. In approximately 12 hours, you can gain a basic understanding of the faith of 22% of the world. Its pretty inexcusable to know next to nothing about such a predominant religion.

A brilliant short history of Islam

Would you listen to No god but God again? Why?

I would listen again because the subject matter is not only critical to our modern day understanding of Islam, but also to familiarize myself with the history of the religion.

What other book might you compare No god but God to and why?

Zealot by Aslan follows a similar overview of the history of a major religion--in that case, Christianity--but No God But God differs a bit in that it looks at how Islam has been splintered off into various sects and the role of those sects in the Middle East.

Which character – as performed by Shishir Kurup – was your favorite?

This is a history, so this question is not really applicable.

I was moved by the initial peace and egalitarianism espoused by Mohammed and his tolerance for people of other faiths. It is a stark contrast to the hatred of and by religious "fundamentalists," whose fundamental belief seems to always be composed of hatred of all others who may differ from them.

Do not believe the negative reviews of this book or of Zealot. Those reviews appear to all stem from the very same religious intolerance and ignorance that they accuse the author of possessing.

Islam in the Arab world, but that's it

I started this book wanting to understand what Islam is about and what the global community of Muslims is like, beyond the tragedies and aggression that make the news. Sadly, most of my questions were left unanswered.

Aslan admits that Arabs make up only 20% of Muslims today, but this book never discusses Islam in Southeast Asia (where 62% of Muslims live) or anywhere else. It's all about the Middle East.

I love hearing Reza Aslan's thoughts on religion in general, so I was also disappointed that this book is about 90% straight history with very little commentary to help trace its relevance to modern-day Islam. (Contrast this with Zealot, in which he presented strong ideas and worked to support them.)

I might listen to the last few chapters again, to make sure I didn't miss anything major. I have to say that this book has taught me things I didn't know about Islam—I only wish it had gone further, with less detail about the religion's early years.

The narrator was excellent: very clear and easy to listen to.

A great history of Islam told by one who knows all the man-made changes of the essential tenets of this religion. Again, what began as pure and tolerant monotheism evolved into the fractions, factions, and fanatics in today's world. Just like every other "religion" on the planet.

It should be required "reading" for every thinking person who cares about other people in today's world to separate fact from fiction about a little understood and much maligned organized religion.

I own the book as well, and it helped to refer to it during my listen. Unless one is fluent in Arabic, the names, places, and phrases used through out the book confuse the western ear. Being able to read them, flip through the pages to sort out some confusion as to who did what to whom, and/or why helped a lot.

this was a great book as an introduction to the historical context of Islam leading up to current politics.

What made the experience of listening to No god but God the most enjoyable?

This book is filled with both historical information and contemporary relevance, but Aslan somehow manages to convey it all with brevity, depth, depth, and sincerity. He avoids the pitfalls of dogmatism or sounding preachy on the one hand while unapologetically remaining faithful to the spirit and intention of Islam on the other. I would recommend it highly to anyone with even a passing interest in Islam. I would especially recommend it to the opponents of Islam, or to anyone politically-minded, as it presents what I believe to be an accurate, measured account of the history of one of the world's great religions and sheds light on so many of the current conflicts in which our world is embroiled.

Have you listened to any of Shishir Kurup’s other performances before? How does this one compare?

No, but Kurup's reading is excellent.

We are not so different after all.

What I did not know about Islam

I took up this book after listening to Zealot by the same author. That was quite a book and very enlightening.

This book on Islam is also enlightening. I was prepared to be disappointed either because the author would be somehow Blind or that the book would otherwise be second-rate.

However, clearly Mohammad was a decent person, and clearly Islam is a legitimate faith and not some mishmash dreamed up more than a thousand years ago.

When Mohammad was alive, he got along just fine with the Jewish folk!

What happened to Islam was the problem of succession to Mohammad. Complexities due to special interests of the original business and government leaders of Mecca and a variety of other groups disputing control affect Islam to this day.

There is a lot of detailed understanding in this book that explains modern Islam such that it can be understood justly. There is an explanation of the Taliban and Al Quaida as a reaction more to Saudi Arabia (and the extraordinary hypocrisy of its leaders' materialism and its extremely strict Puritanical Wahhabi sect of Islam) than to the United States!

Mentioned in passing is that the American Center for Disease Control and the American Type Culture Control (.org on the web) provided the chemical and biological materials used by Saddam Hussein for use on the Iranians to such horrific effect some years ago.

The author Reza Aslan is a member of the Council on Foreign Relations.

The narrator was most excellent.

Loads of knowledge, but a piece of good literature as well. Will make you fascinated and may change the view on islam. For all those who want to know more and understand more. Of the past and present.
I do recommend !

This is one of the best-written books on Islam I have ever read. The author, the Iranian-American Muslim who grew up in a small town in America South, takes an objective view on the world's most controversial religion today. The greatest virtue of this book is that it's easy to read while not skipping important details in the early development of the faith. If you still feel this book is too much for you, try "Destiny Disrupted" (2009) by Tamim Ansary, which is much easier and full of interesting episodes.

An apologia for Islam

At times I had a hard time following the books logic. He posits Iran as the harbinger of the future advocating plurality and human values etc. Then, later, refers to it as a fascist theocracy. He mentions "equality" but doesn't address the historical plight of women, apostates or slaves...who do not receive religious protection. Forget any mention of their ideas on homosexuality or adultry. Shias whipping themselves, the author maintains, is about "freedom" and there is no pain. He mentions Western imperialism but refuses to describe Muslim conquests the same way. Slaughters by Westerners are bad, but he justifies the same actions by Muslims. He likes absolves Muslims of any act by maintaining that Christians and Jews are just as "bad." I believe the author had an aim in mind to make Islam appear to be a pleasant form of worship and that anyone reading the book does not read a newspaper. He barely mentions how Muslim countries interact in the modern world (9/11 is mentioned but not deiscussed) or the reasons for their economic backwardness. (Bernard Lewis is a better read in these areas.) I found his description of Sufism hard to follow; it may have been easier in the written word.