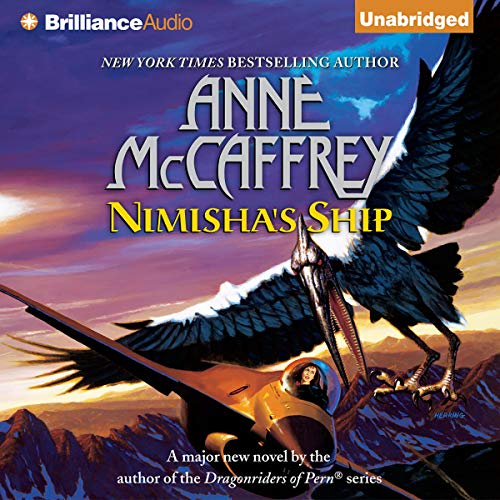 On Vega III, where the jaded inhabitants pursue lives of malicious intrigue and decadent pleasure, Lady Nimisha Boynton-Rondymense has always been an anomaly. Disdainful of the frivolity of her fellows, she prefers the exciting and challenging world of her father, Lord Tionel, owner and principal starship designer of the famous Rondymense shipyards.

Precociously gifted, Nimisha becomes Lord Tionel's secret assistant - and, in the aftermath of a shocking tragedy, his chosen successor at the helm of the shipyards. But supplanting her father's designated body-heir, the callow Lord Vestrin, is a slight that Vestrin and his mother, Lady Vescuya, will not easily forget. Or forgive.

Preoccupied with carrying on her father's ambitious plans for the Mark 5, an experimental long-distance cruiser, Nimisha dangerously disregards Vestrin's animosity - until a solo test flight of the Mark 5 goes horribly awry, marooning Nimisha light-years from home on a planet as deadly as it is beautiful.

Now, Vestrin and Vescuya are given the chance they've been waiting for: to reclaim the shipyards...by any means necessary. Only Nimisha's child, Cuiva, a girl every bit as ingenious as her mother - stands in their way.

But for how long? For just when her daughter needs her most, Nimisha is unable to help - and in a precarious situation herself. But Nimisha has never given up in her life - and she's not about to start now.

If you love stories of capitalism and industrialism this is a great book. It mixes the love of engineering, capitalism, and sci-fi. I am currently only a quarter of the way through, but I can't wait to listen to more. Need to get some engineering of my own done first.

Fun to revisit this book after 20 years

I listen to Audible while running so I need material that is engaging but not too complex. Anne McCaffrey has long been one of my favorite authors and Nimisha's Ship is one of her few books that doesn't require listening to an entire series. The characters have just enough depth to keep them interesting, most of the technical details are still relevant and the plot moves along at a good pace. The narration was excellent with good character voices which made it easy to follow.

This is not one of McCaffrey's best books, but it is ok. It feels a little unfinished. The narrator is also good, but not great.
I like the premise and the characters but the book feels like it had more story to tell with no time to tell it, and some inconsistencies show a little lack in editing.

More of a documentary than an adventure

There really isn't the slightest bit of tension in the whole story, not even a harsh word between characters. Almost every bit of dialogue is accompanied by the narrator pointing out the "grin" on the face of the speaker. The first third of the book is a dry rendition of the story of our protagonist growing up, without the slightest shred of personality development. Our protagonist, Nimisha, is clearly perfect in every way.

The story picks up a bit once she's marooned on the planet, but the characters still aren't developed as distinct personalities. The plot summary of the book hints that dark forces are scheming to take over her ship building company while Nimisha is gone, but in reality, that only occupies a few paragraphs and then disappears as a threat.

The writing style of the book is awkward, as if the author was thumbing through a thesaurus to find the most obscure word to say something simple, and of the characters talked the same way. You can't tell the difference between the narrator and any other character in the story. I surely expected something better from an author of McCaffrey's experience.

The narrator talked too fast, didn't make distinctions among voices, and stumbled frequently.

this audio book seems to have skipped some content

I read the book before purchasing the audiobook and some of the content is missing in the book.

While I enjoyed this book I did not think it held up the standard of her Pern novels. Set in the same universe as Pern helped, but without the dragons and the unique society they forced, the society portrayed felt impossible to maintain. Indeed it had been tried here on earth several times and each time brought about the nation's fall. Ironically, that never seems to stop people from trying again. Class based societies without strong family units never last. Still I did enjoy the book.

I always enjoy Anne's stories. She has a special perspective on humanity. Her positivity is refreshing.

From Nowhere to Erehwon

Anne McCaffrey books never disappoint. Niimisha's character was written well before it was popular to have a strong female lead. She is an unabashed multitalented individual. Her adventures are wonderfully imagined. All the characters in this book are well drawn and interesting. I would wholeheartedly recommend this book to anyone interested in science fiction.

Perhaps it was the narrator's tone in the reading of this, but everything felt far too easy for Nimisha. The book summary made it sound like life in the new planet would be frightening and difficult, but get ship made everything easy. It is a cool ship, but the whole book felt like one long happy ending. The performance itself was okay. Some variation between characters and I liked the effects they used for ship voices.

One of Anne McCaffery's Best!!

One of my favorite authors for decades! Somehow, I missed reading this book. She has a special way of developing her characters and creating worlds that make me want to join the crew and explore with them. This undoubtedly will remain one of my all-time favorite books to be read (I do have the book) and listened to again!!
Susan Ericksen did an exceptional job of bringing the characters to life, with their unique personalities, including the AI's!