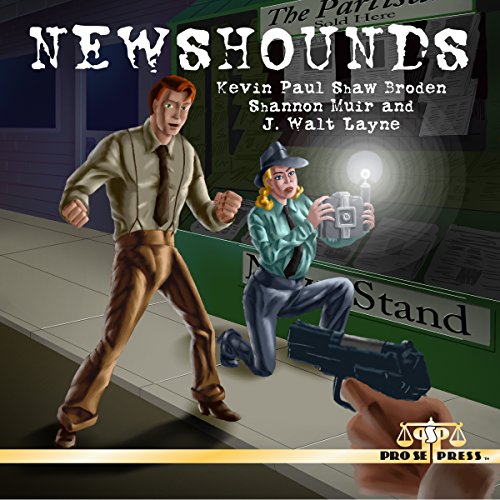 News for All, Justice for the Innocent and Weak!

That is the masthead of The Partisan and the mission of its keepers in Pro Se Productions' action-packed tribute to the printed press - Newshounds!

Dogged reporters, crusty editors, copyboys, and cub photographers with dreams of grandeur. Pressmen who know the city lives and breathes by what they print. Characters like editor Red Dillinger, reporters Viv Bailey and Ted Boland, photographer Margie Haviland, and more all work for The Partisan, a 1950s paper partial to the common man, to righting the wrongs done against the housewives and the blue collars! And this gaggle of hard-bitten, hard-fighting men and women are known near and far to those who love them and those who wish to see them dead!

Do no wrong in their city unless you want it covered by the Newshounds! Started in 1930 to stand up for the little person and to protect the rights of the rightless, The Partisan has always been the paper that focused on both accurate news reporting and standing up for the common citizen against crime and corruption of all types. This led to a style of writing both factual and fiery that the paper is known for.

Authors Kevin Paul Shaw Broden, Shannon Muir, and J. Walt Layne bring life to the chaotic adventures of a larger-than-life newspaper staff in this three-story collection. Only two types of people work at The Partisan - those truly interested in standing up for truth and justice and what's right...and those with a death wish or nowhere else to go. Either way, they make great stories for Pro Se Productions' Newshounds!